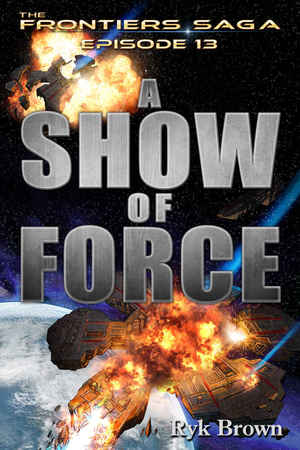 A ​Show of Force Ryk Brown
0

Ryk Brown - A ​Show of Force
Episode ​13 The liberation of old worlds… The addition of new allies… The fall of a regime… The death of a trusted friend… The Aurora begins clearing a 20 light year sphere of safety around Earth, taking out Jung forces as they liberate the core systems. However, Captain Scott and the Alliance quickly discover that not every world wants to be liberated, and the Jung have a few surprises of their own. “A Show of Force” is a 137,000 word novel, and is the 13th episode in The Frontiers Saga. 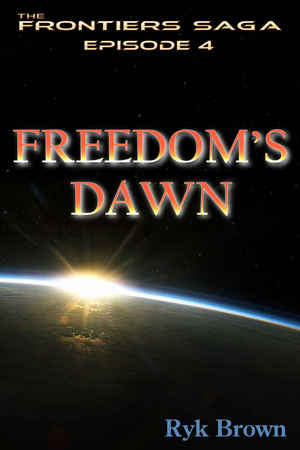 Ryk Brown - Freedom's ​Dawn
Episode ​4 A ship under siege… A world on the brink of civil war… A distraught people seeking a new beginning… A battle weary crew that can barely hold it together… Even a legend can use a little help from time to time. The crew of the Aurora, the Karuzari, and the Corinairans must find a way to work together or else they may all perish. “Freedom’s Dawn” is a 94,000 word novel, and is the 4th episode in The Frontiers Saga. 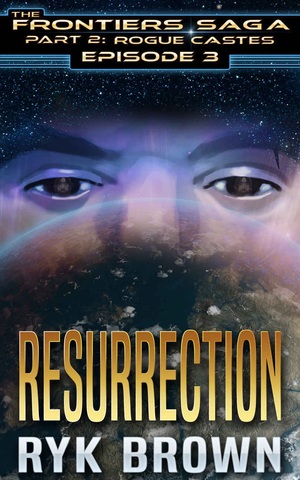 Ryk Brown - Resurrection
The ​enemy tightens its grip... Friends suffer a terrible blow... Difficult decisions must be made... Old comrades find a way to come together... Captain Tuplo must finally make the decision that has been haunting him since he learned the truth about his origins only a week ago. The fact that billions of lives may hang in the balance isn't making it any easier. Will Connor be able to face the demons of his past? 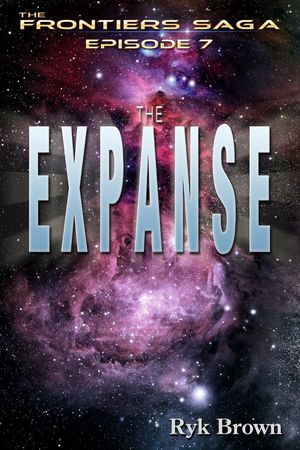 Ryk Brown - The ​Expanse
Episode ​7 A newly repaired ship… A willing and eager crew… A host of new technologies… A long anticipated return home… The crew of the UES Aurora finally has the chance to fulfill their mission, but first they must complete a long and dangerous journey across a thousand light years of unexplored space. “The Expanse” is a 104,000 word novel, and is the 7th episode in The Frontiers Saga. 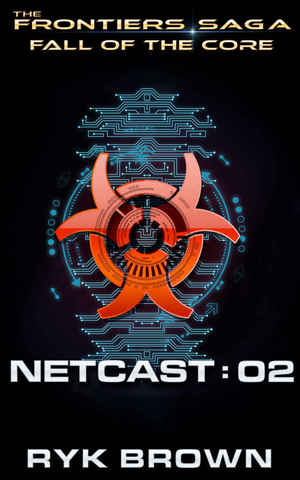 Ryk Brown - Netcast ​02
Progression ​of the Klaria virus is finally showing signs of slowing, but with half the world’s population either dead or dying, it may be too little, too late. Despite the Unified Earth governments’ best efforts, entrepreneurs are still finding ways to profit from the catastrophe that is threatening to end humanity throughout the core worlds of Earth. Although she now has the job she has always dreamt of, NCN:World reporter Hanna Bohl must brave her own fears and venture out into the devastated, plague-infected world, in order to find and present the stark realities that the human race must now face. 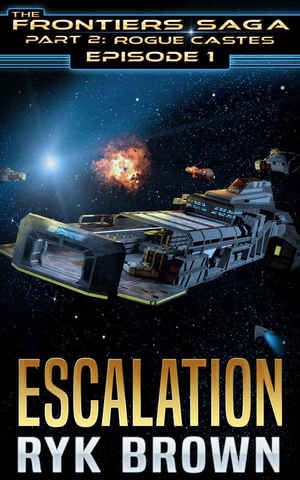 Ryk Brown - Escalation
A ​cease-fire that has lasted seven years… Worlds half-destroyed that have been rebuilt anew… Friends and crewmates scattered light-years apart… New leaders that would be kings… The Jung threat has been renewed, in ways not imagined. It will take a new savior to inspire the masses, and once again lead those willing to fight against oppression. But who will the new savior be? 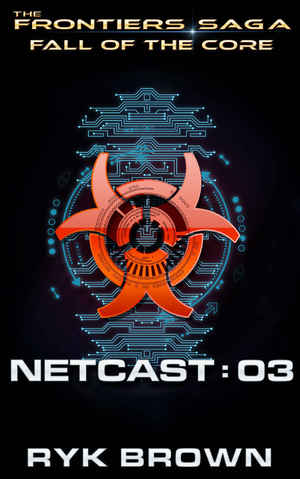 Ryk Brown - Netcast ​03
NCN:World ​reporter Hanna Bohl's investigation into profiteering by Earth's mega-corporations in the wake of the bio-digital plague has taken an unexpected turn. She now finds herself in v-space, face to face with the mastermind behind the very virus that threatens to wipe out the human race. At the request of Agent Oslo of Earth's International Counter-Terrorism Agency, Hanna must now try to outsmart the madman, while trying to discover anything that might help humanity avoid complete annihilation. But the truths that Hanna discovers are not what she expected, and now, she must decide who to trust. 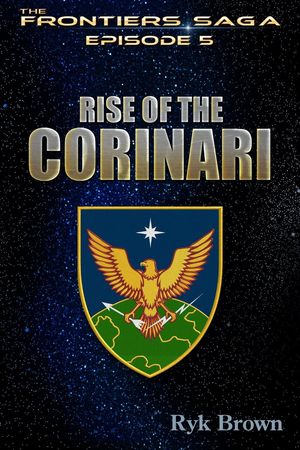 Rise ​of the Corinari Ryk Brown
0

Ryk Brown - Rise ​of the Corinari
Episode ​5 A time to recover… A chance to make a new ally… A brief respite to repair and rearm… An opportunity for a people to regain their honor… For every civilization there comes a moment when a stand must be made against tyranny. The time has come for the Alliance to draw a line in the sand. “Rise of the Corinari” is a 112,000 word novel, and is the 5th episode in The Frontiers Saga. 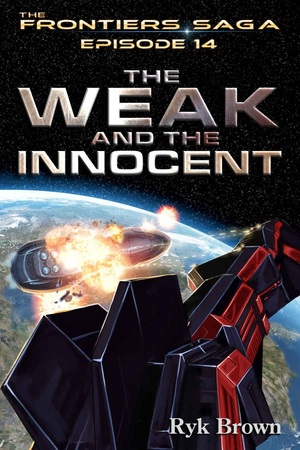 The ​Weak and the Innocent Ryk Brown
0

Ryk Brown - The ​Weak and the Innocent
Episode ​14 A ship in the hands of their enemy… A liberation gone wrong… A chance to double their ranks… A bold and daring plan… Their support from the Pentaurus cluster dwindling fast, the Alliance faces new and unpleasant realities in the Sol sector. But untoward changes also bring unexpected opportunities… The 'trick' is in how you use them. “The Weak and the Innocent” is a 110,000 word novel, and is the 14th episode in The Frontiers Saga. 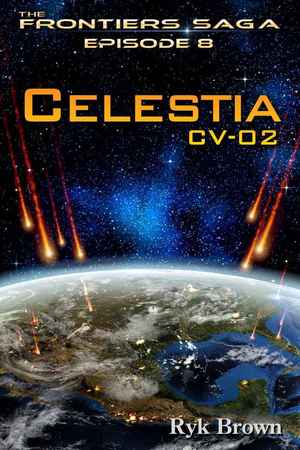 Ryk Brown - Celestia: ​CV-02
Episode ​8 A world divided… A ship under construction… A military scrambling to prepare a defense… A moment that everyone hoped would never come… The Earth Defense Force must find a way to defend their world against invasion by the Jung Empire. More importantly, they must protect their newest ship, the UES Celestia, as she may be their last hope. “Celestia: CV-02” is a 94,000 word novel, and is the 8th episode in The Frontiers Saga. 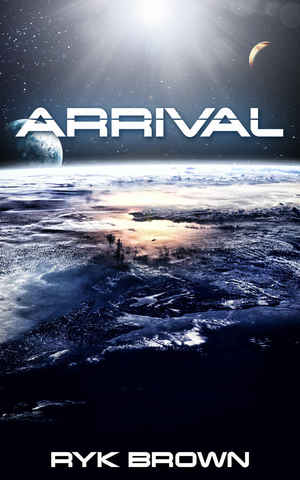 Ryk Brown - Arrival
The ​Eden Project was a dream. To start the first extra-solar colony… To avoid the mistakes of our past… To start anew. Three generations, born and raised on a starship hurtling through space. To never know an open sky… To never feel the wind on their face… To never witness the sun rise or set. It is up to the advance team to set foot on each of these worlds, conduct their surveys, and send their findings back to the colony ship. So many questions… So little time… Such an enormous responsibility. Everything must go as planned, for the welfare of all the colonists depends on them. “Arrival” is a 170,000 word, stand-alone novel. 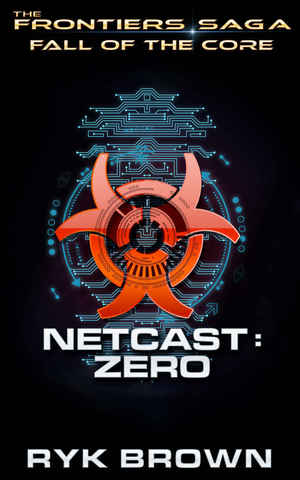 Ryk Brown - Netcast ​Zero
At ​the dawn of a new century, the line between the real world and the virtual world has become nearly indistinguishable. Some claim that humanity is on the precipice of becoming one with our digital systems, despite centuries of effort at staving off that event. They claim that our dependence upon our digital technology is the doomsday weapon that will be our final undoing, and they warn that time is running out. For independent field reporter Hanna Bohl, the end of humanity is just the beginning. 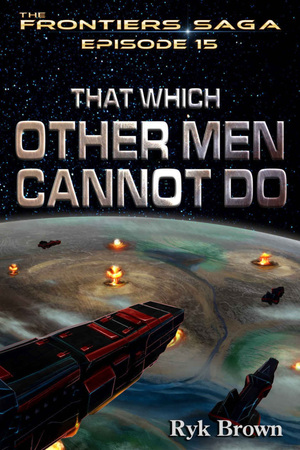 That ​Which Other Men Cannot Do Ryk Brown
0

Ryk Brown - That ​Which Other Men Cannot Do
New ​forces grow… Old friends are lost… New alliances are forged… Old weapons are made new… With political unrest growing, the Alliance must rush to rebuild their fleet and expand their 'sphere of influence' before their support runs out. But when the Jung up the ante, the Alliance must turn up the heat. Captain Nathan Scott and the Sol-Pentaurus Alliance must put everything on the line to save the Sol sector once and for all. “That Which Other Men Cannot Do” is a 156,000 word novel, and is the 15th and final episode of Part I of The Frontiers Saga. 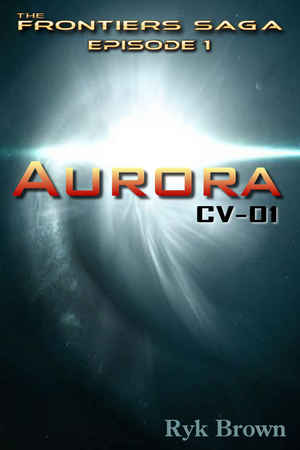 Ryk Brown - Aurora: ​CV-01
A ​world recovering from a devastating plague… A brutal enemy threatening invasion… A young man seeking to escape the shadow of his father… A ship manned by a crew of fresh academy graduates… A top-secret experimental propulsion system… A questionable alliance with a mysterious green-eyed woman… What destiny has in store for the crew of the UES Aurora, is far greater than any of them could ever imagine. And this is only the beginning… 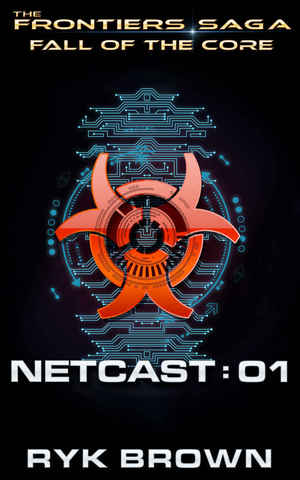 Ryk Brown - Netcast ​01
As ​the Klaria virus sweeps across the planet, leaving death, and destruction in its wake, officials search for the man responsible for the bio-digital plague, beginning with their only real lead, text messages sent by a man referred to only as ‘Unknown.’ For field reporter Hanna Bohl, the crisis has given her the opportunity she has always dreamed of… A shot at the big leagues of broadcast journalism. 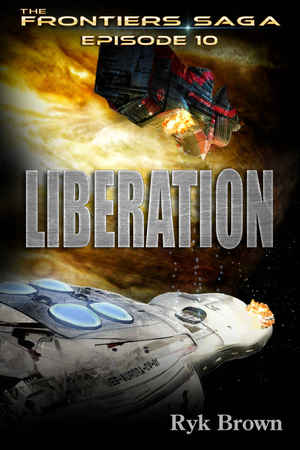 Ryk Brown - Liberation
Episode ​10 Heartfelt reunions with friends… Desperate plans to gain advantage… Opportunities that cannot be ignored… Discovery of family once thought lost… The time has come for Captain Scott to fight for that which was taken… the very freedom of the world he was sworn to protect. “Liberation” is a 108,000 word novel, and is the 10th episode in The Frontiers Saga. 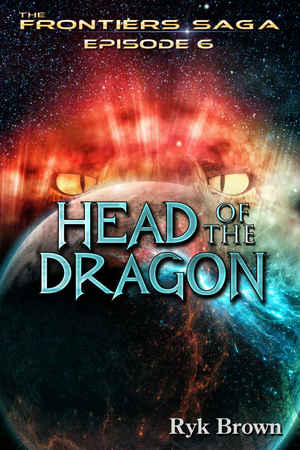 Head ​of the Dragon Ryk Brown
0

Ryk Brown - Head ​of the Dragon
Episode ​6 Time is running out… An ally has all but fallen… Resources are running low… The time for attack has come... The Alliance must strike deep into the heart of the empire. This time, the Aurora will be going home, or going to her grave. “Head of the Dragon” is a 133,000 word novel, and is the 6th episode in The Frontiers Saga. 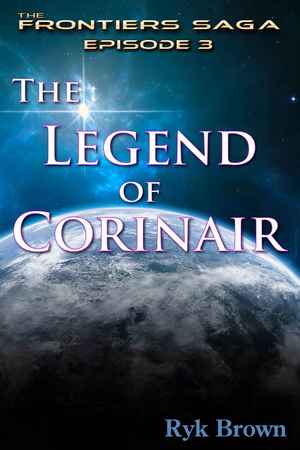 The ​Legend of Corinair Ryk Brown
0

Ryk Brown - The ​Legend of Corinair
Episode ​3 A captain coming into his own… A handful of refugees stranded on board… A possible traitor in their midst… A voyage into the territory of the very enemy that pursues them… Sometimes legends become realities in unexpected ways. It seems that fate has the crew of the Aurora firmly in its clutches. 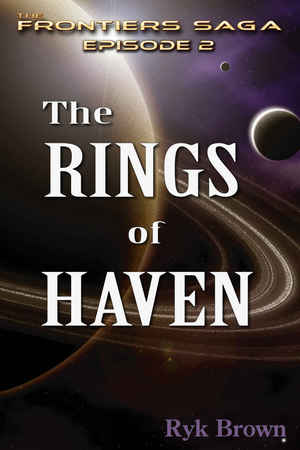 The ​Rings of Haven Ryk Brown
0

Ryk Brown - The ​Rings of Haven
Episode ​2 A ship stranded halfway across the galaxy… A difficult and lengthy journey home… A homeworld in urgent need of their return… And now they are running out of food… The crew of the Aurora must now trust their new allies in order to survive. But their situation may be far more serious than they imagined. And their actions could have repercussions across the galaxy. Their journey home may just have gotten slightly more complicated. “The Rings of Haven” is a 60,000 word novel, and is the second episode in The Frontiers Saga. 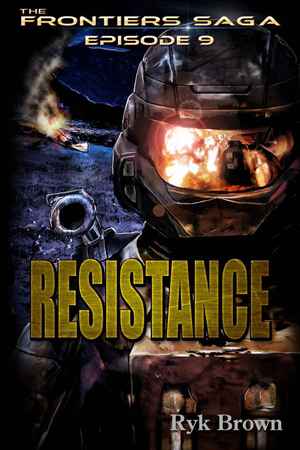 Ryk Brown - Resistance
Episode ​9 A chance to gain much needed resources… A group of highly trained, merciless soldiers… A half-completed ship on a trajectory to nowhere… A lone operative on familiar yet dangerous ground… Captain Scott and the crew of the Aurora have a chance to get everything they need to liberate their home world, but they may have to fight someone else's war first. “Resistance” is a 97,000 word novel, and is the 9th episode in The Frontiers Saga. 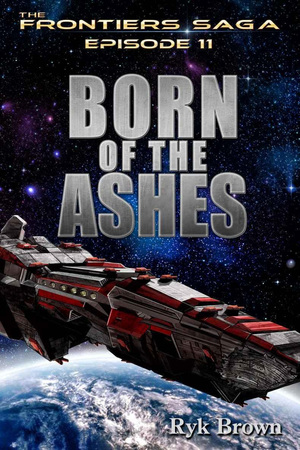 Born ​of the Ashes Ryk Brown
0

Ryk Brown - Born ​of the Ashes
Episode ​11 A world in chaos… An eager new ally… A newly acquired ship… An even greater threat on its way… Captain Nathan Scott must decide whether to stand and fight to the end, or live to fight another day… even if it means the end of his world. “Born of the Ashes” is a 122,000 word novel, and is the 11th episode in The Frontiers Saga. 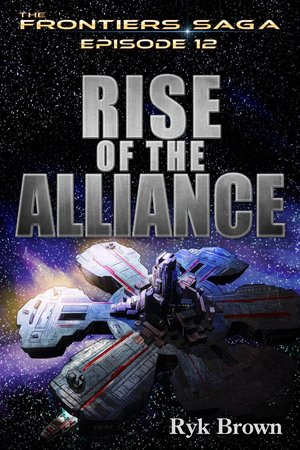 Rise ​of the Alliance Ryk Brown
0

Ryk Brown - Rise ​of the Alliance
Episode ​12 A new ally providing aid… An old ally joining the fight… Their resources growing with each passing day… Their homeworld finally on the road to recovery… Things finally seem to be coming together for Captain Scott and the Alliance, as he takes his forces on the offensive. However, the Jung may in turn give him more trouble than he bargained for. “Rise of the Alliance” is an 111,000 word novel, and is the 12th episode in The Frontiers Saga. 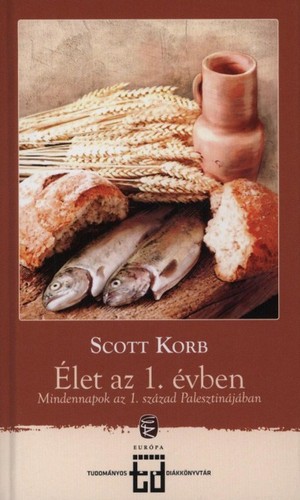