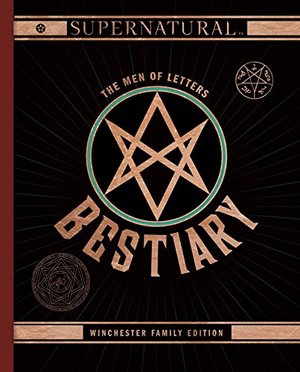 E. J. Waggoner - The ​Men of Letters Bestiary
This ​immersive in-world guide based on the highly popular Supernatural television show reveals the strengths, weaknesses, secrets of the deadly ghosts, demons, angels, and creatures that the Winchesters have hunted. An immersive in-world guide to the Supernatural universe, this tome from the Men of Letters' archive features information on the most deadly ghosts, monsters, and infernal events ever encountered. The Men of Letters were a secret society dedicated to accumulating knowledge of the supernatural and arcane mysteries. Years after the order was wiped out, Sam and Dean Winchester inherited their hidden bunker, where Sam compiled the records of the supernatural entities discovered by the Men of Letters into one book, along with additions and annotations from the Winchesters informed by their time as hunters. From the Knight of Hell Abaddon to banshees and the Wendigo this fully-illustrated tome will allow fans to explore the creatures of Heaven, Hell, and Earth from the Winchesters' perspective. Complete with commentary from Dean and Castiel, Supernatural: The Men of Letters Bestiary offers a rare, immersive look at the creatures and spirits that inhabit the series.