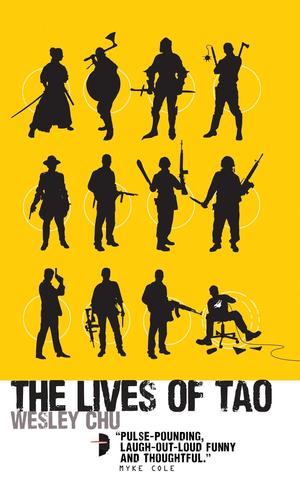 The ​Lives of Tao Wesley Chu
0

Wesley Chu - The ​Lives of Tao
When ​out-of-shape IT technician Roen woke up and started hearing voices in his head, he naturally assumed he was losing it. He wasn’t. He now has a passenger in his brain – an ancient alien life-form called Tao, whose race crash-landed on Earth before the first fish crawled out of the oceans. Now split into two opposing factions – the peace-loving, but under-represented Prophus, and the savage, powerful Genjix – the aliens have been in a state of civil war for centuries. Both sides are searching for a way off-planet, and the Genjix will sacrifice the entire human race, if that’s what it takes. Meanwhile, Roen is having to train to be the ultimate secret agent. Like that’s going to end up well… 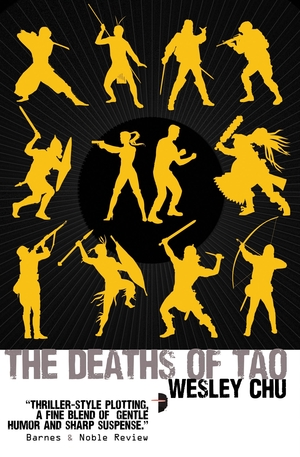 The ​Deaths of Tao Wesley Chu
0

Wesley Chu - The ​Deaths of Tao
The ​Prophus and the Genjix are at war. For centuries they have sought a way off-planet, guiding humanity’s social and technological development to the stage where space travel is possible. The end is now in sight, and both factions have plans to leave the Earth, but the Genjix method will mean the destruction of the human race. That’s a price they’re willing to pay. It’s up to Roen and Tao to save the world. Oh, dear… 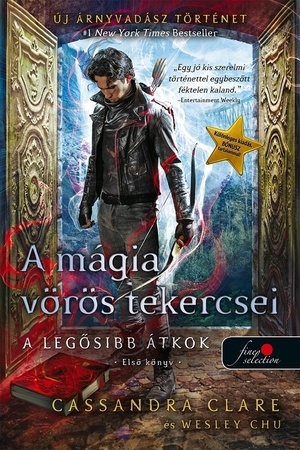 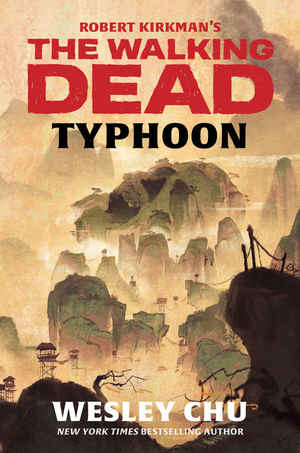 Wesley Chu - The ​Walking Dead: Typhoon
From ​The Walking Dead creator Robert Kirkman and New York Times #1 Bestselling author Wesley Chu comes the first ever Walking Dead story set in Asia. It has been months since the dead rose up across China. In the most populous country on the planet, the cities are all but lost, small villages reduced to ash. Zhu and Elena are members of a Wind Team, responsible for scavenging supplies and materials needed to sustain their settlement: the Beacon of Light. Elena, stranded in China during the walker outbreak, longs for news of her Texas home as she tries to adapt to life in a foreign culture while surviving the millions of dead roaming the countryside. But when Zhu discovers survivors from his home village hiding in the wilderness, he is torn between his love for Elena, his duty to the Beacon, and his devotion to his friends and family. Meanwhile, Hengyen, the grizzled master of the Beacon’s security, discovers the largest group of walkers ever seen: a 1,000,000-strong typhoon that is bearing down on the Beacon. He must lead all of the survivors into the biggest battle of their lives, or humanity will be wiped out for good. Clashing ideals become raging confrontations as these characters fight for refuge from each other and innumerable walkers in a new and thrilling adventure for Walking Dead fans everywhere. 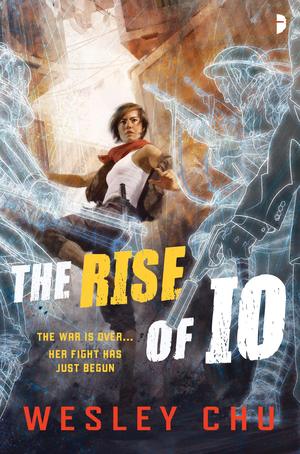 The ​Rise of Io Wesley Chu
0

Wesley Chu - The ​Rise of Io
Ella ​Patel – thief, con-artist and smuggler – is in the wrong place at the wrong time. One night, on the border of a demilitarized zone run by the body-swapping alien invaders, she happens upon a man and woman being chased by a group of assailants. The man freezes, leaving the woman to fight off five attackers at once, before succumbing. As she dies, to both Ella and the man’s surprise, the sparkling light that rises from the woman enters Ella, instead of the man. She soon realizes she’s been inhabited by Io, a low-ranking Quasing who was involved in some of the worst decisions in history. Now Ella must now help the alien presence to complete her mission and investigate a rash of murders in the border states that maintain the frail peace. With the Prophus assigned to help her seemingly wanting to stab her in the back, and the enemy Genjix hunting her, Ella must also deal with Io’s annoying inferiority complex. To top it all off, Ella thinks the damn alien voice in her head is trying to get her killed. And if you can’t trust the voices in your head, who can you trust? 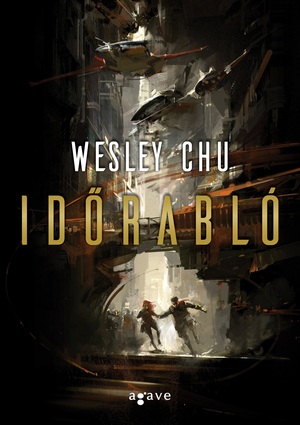 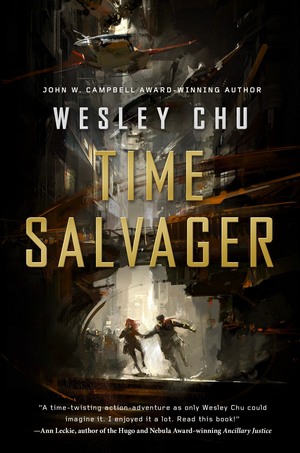 Wesley Chu - Time ​Salvager
Convicted ​criminal James Griffin-Mars is no one’s hero. In his time, Earth is a toxic, abandoned world and humans have fled into the outer solar system to survive, eking out a fragile, doomed existence among the other planets and their moons. Those responsible for delaying humanity’s demise believe time travel holds the key, and they have identified James, troubled though he is, as one of a select and expendable few ideally suited for the most dangerous job in history. James is a chronman, undertaking missions into Earth's past to recover resources and treasure without altering the timeline. The laws governing use of time travel are absolute; break any one of them and, one way or another, your life is over. Most chronmen never reach old age; the stress of each jump through time, compounded by the risk to themselves and to the future, means that many chronmen rapidly reach their breaking point, and James Griffin-Mars is nearing his. On a final mission that is to secure his retirement, James meets Elise Kim, an intriguing scientist from a previous century, who is fated to die during the destruction of an oceanic rig. Against his training and his common sense, and in violation of the chronmen’s highest law, James brings Elise back to the future with him, saving her life, but turning them both into fugitives. Remaining free means losing themselves in the wild and poisonous wastes of Earth, somehow finding allies, and perhaps discovering what hope may yet remain for humanity's home world. 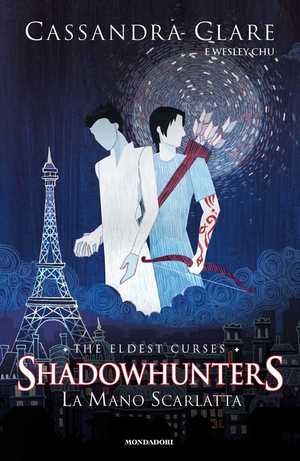 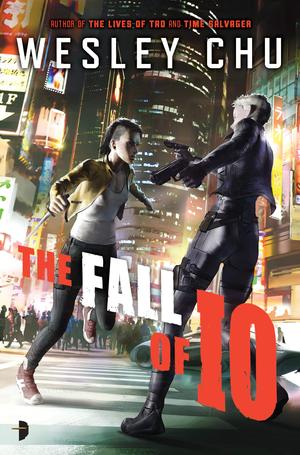 The ​Fall of Io Wesley Chu
0

Wesley Chu - The ​Fall of Io
The ​superb aliens-in-your-head SF sequel to the wildly popular The Rise of Io, by the author of The Lives of Tao series When Ella Patel's mind was invaded by the Quasing alien, Io, she was dragged into the raging Prophus versus Genjix war. Despite her reservations, and Io's incompetence, the Prophus were determined to train her as an agent. It didn't go well. Expelled after just two years, Ella happily returned to con artistry, and bank robberies. But the Quasing war isn't done with them yet. The Genjix's plan to contact their homeworld has reached a critical stage, threatening all life on Earth. To complete the project they need Io's knowledge - and he's in Ella's head - so now they're both being hunted, again. 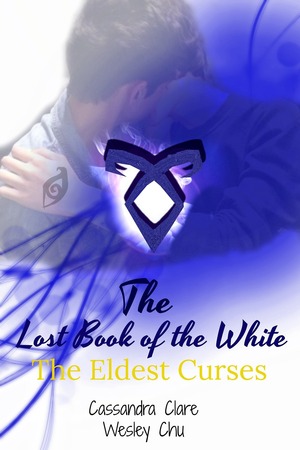 The ​Lost Book of the White Cassandra Clare - Wesley Chu
0

Cassandra Clare - Wesley Chu - The ​Lost Book of the White
From ​#1 New York Times bestseller Cassandra Clare and Wesley Chu comes the first book in a new trilogy featuring the centuries-old High Warlock Magnus Bane and Alec Lightwood after they survive the Mortal War. Magnus Bane, a centuries old High Warlock, has taken possession of one of the great relics of the supernatural world, a powerful spell book of dark magic known as The Book of the White and there are many who want to claim it for themselves. After the Mortal War where the part-human and part-angel Shadowhunters teamed with the part human-demon Downworlders to fight against the incursion of an army of demons, Magnus and his new lover, the mortal Alec Lightwood celebrate their survival and victory by escaping the supernatural battlefield of New York City by touring the world, but the world won’t leave them alone. The first adult novel set within #1 New York Times bestselling author Cassandra Clare’s Shadowhunter series, The Lost Book of the White, written with award-winning science fiction author Wesley Chu, is a fantasy thriller that will give new readers a great way to enter the Shadowhunters world and give the millions of readers across the globe answers they’ve been looking for in this start of The Eldest Curses trilogy. 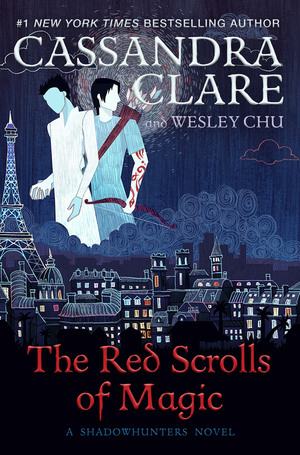 Cassandra Clare - Wesley Chu - The ​Red Scrolls of Magic
From ​#1 New York Times bestseller Cassandra Clare and award-winner Wesley Chu comes the first book in a new series that follows High Warlock Magnus Bane and Alec Lightwood as they tour the world after the Mortal War. The Red Scrolls of Magic is a Shadowhunters novel. All Magnus Bane wanted was a vacation—a lavish trip across Europe with Alec Lightwood, the Shadowhunter who against all odds is finally his boyfriend. But as soon as the pair settles in Paris, an old friend arrives with news about a demon-worshipping cult called the Crimson Hand that is bent on causing chaos around the world. A cult that was apparently founded by Magnus himself. Years ago. As a joke. Now Magnus and Alec must race across Europe to track down the Crimson Hand and its elusive new leader before the cult can cause any more damage. As if it wasn’t bad enough that their romantic getaway has been sidetracked, demons are now dogging their every step, and it is becoming harder to tell friend from foe. As their quest for answers becomes increasingly dire, Magnus and Alec will have to trust each other more than ever—even if it means revealing the secrets they’ve both been keeping. 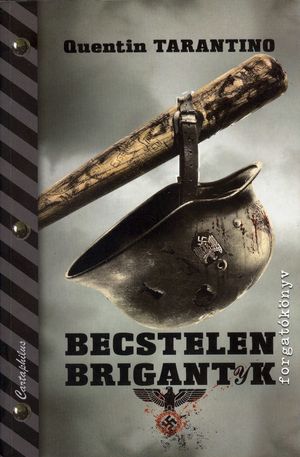