Paolo Bacigalupi - Ship ​Breaker
In ​America's Gulf Coast region, where grounded oil tankers are being broken down for parts, Nailer, a teenage boy, works the light crew, scavenging for copper wiring just to make quota--and hopefully live to see another day. But when, by luck or chance, he discovers an exquisite clipper ship beached during a recent hurricane, Nailer faces the most important decision of his life: Strip the ship for all it's worth or rescue its lone survivor, a beautiful and wealthy girl who could lead him to a better life. . . . In this powerful novel, award-winning author Paolo Bacigalupi delivers a thrilling, fast-paced adventure set in a vivid and raw, uncertain future. 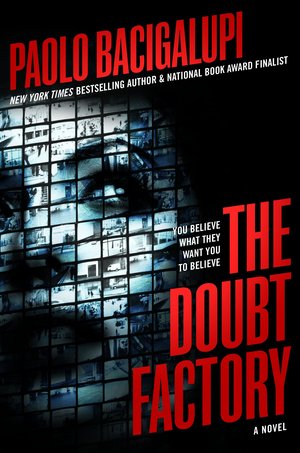 Paolo Bacigalupi - The ​Doubt Factory
In ​this page-turning contemporary thriller, National Book Award Finalist and New York Times bestselling author Paolo Bacigalupi explores the timely issue of how public information is distorted for monetary gain, and how those who exploit it must be stopped. Everything Alix knows about her life is a lie. At least that's what a mysterious young man who's stalking her keeps saying. But then she begins investigating the disturbing claims he makes against her father. Could her dad really be at the helm of a firm that distorts the truth and covers up wrongdoing by hugely profitable corporations that have allowed innocent victims to die? Is it possible that her father is the bad guy, and that the undeniably alluring criminal who calls himself Moses--and his radical band of teen activists--is right? Alix has to make a choice, and time is running out, but can she truly risk everything and blow the whistle on the man who loves her and raised her? 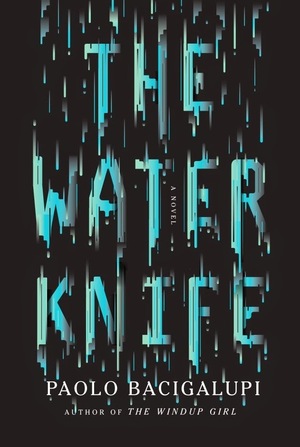 Paolo Bacigalupi - The ​Water Knife
In ​the American Southwest, Nevada, Arizona, and California skirmish for dwindling shares of the Colorado River. Into the fray steps Angel Velasquez, detective, leg-breaker, assassin and spy. A Las Vegas water knife, Angel "cuts" water for his boss, Catherine Case, ensuring that her lush, luxurious arcology developments can bloom in the desert, so the rich can stay wet, while the poor get nothing but dust. When rumors of a game-changing water source surface in drought-ravaged Phoenix, Angel is sent to investigate. There, he encounters Lucy Monroe, a hardened journalist with no love for Vegas and every reason to hate Angel, and Maria Villarosa, a young Texas refugee who survives by her wits and street smarts in a city that despises everything that she represents. With bodies piling up, bullets flying, and Phoenix teetering on collapse, it seems like California is making a power play to monopolize the life-giving flow of a river. For Angel, Lucy, and Maria time is running out and their only hope for survival rests in each other’s hands. But when water is more valuable than gold, alliances shift like sand, and the only thing for certain is that someone will have to bleed if anyone hopes to drink. 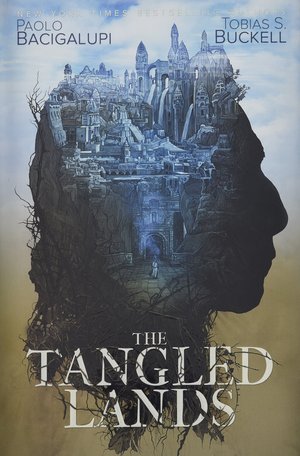 Paolo Bacigalupi - Tobias S. Buckell - The ​Tangled Lands
From ​award-winning and New York Times bestselling authors Paolo Bacigalupi and Tobias Buckell comes a fantasy novel told in four parts about a land crippled by the use of magic, and a tyrant who is trying to rebuild an empire—unless the people find a way to resist. Khaim, The Blue City, is the last remaining city in a crumbled empire that overly relied upon magic until it became toxic. It is run by a tyrant known as The Jolly Mayor and his devious right hand, the last archmage in the world. Together they try to collect all the magic for themselves so they can control the citizens of the city. But when their decadence reaches new heights and begins to destroy the environment, the people stage an uprising to stop them. In four interrelated parts, The Tangled Lands is an evocative and epic story of resistance and heroic sacrifice in the twisted remains surrounding the last great city of Khaim. Paolo Bacigalupi and Tobias Buckell have created a fantasy for our times about a decadent and rotting empire facing environmental collapse from within—and yet hope emerges from unlikely places with women warriors and alchemical solutions. 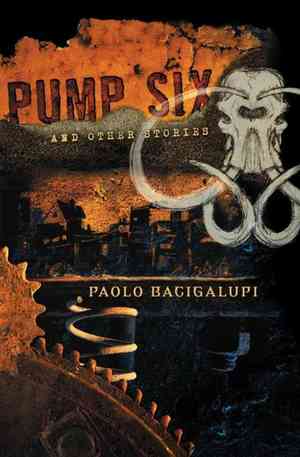 Paolo Bacigalupi - Pump ​Six and Other Stories
Paolo ​Bacigalupi's debut collection demonstrates the power and reach of the science fiction short story. Social criticism, political parable, and environmental advocacy lie at the center of Paolo's work. Each of the stories herein is at once a warning, and a celebration of the tragic comedy of the human experience. The eleven stories in Pump Six represent the best Paolo's work, including the Hugo nominee "Yellow Card Man," the nebula and Hugo nominated story "The People of Sand and Slag," and the Sturgeon Award-winning story "The Calorie Man." 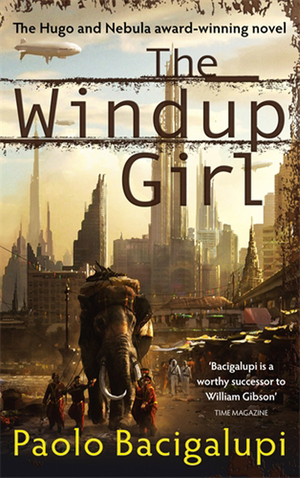 Paolo Bacigalupi - The ​Windup Girl
Anderson ​Lake is a company man, AgriGen's calorie representative in Thailand. Under cover as a factory manager, he combs Bangkok's street markets in search of foodstuffs long thought to be extinct. There he meets the windup girl - the beautiful and enigmatic Emiko - now abandoned to the slums. She is one of the New People, bred to suit the whims of the rich. Engineered as slaves, soldiers and toys, they are the new underclass in a chilling near future where oil has run out, calorie companies dominate nations and bio-engineered plagues run rampant across the globe. And as Lake becomes increasingly obsessed with Emiko, conspiracies breed in the heat and political tensions threaten to spiral out of control. Businessmen and ministry officials, wealthy foreigners and landless refugees all have their own agendas. But no one anticipates the devastating influence of the Windup Girl. Paolo Bacigalupi - The ​Drowned Cities
_Soldier ​boys emerged from the darkness. Guns gleamed dully. Bullet bandoliers and scars draped their bare chests. Ugly brands scored their faces. She knew why these soldier boys had come. She knew what they sought, and she knew, too, that if they found it, her best friend would surely die._ In a dark future America where violence, terror, and grief touch everyone, young refugees Mahlia and Mouse have managed to leave behind the war-torn lands of the Drowned Cities by escaping into the jungle outskirts. But when they discover a wounded half-man--a bioengineered war beast named Tool--who is being hunted by a vengeful band of soldiers, their fragile existence quickly collapses. One is taken prisoner by merciless soldier boys, and the other is faced with an impossible decision: Risk everything to save a friend, or flee to a place where freedom might finally be possible. This thrilling companion to Paolo Bacigalupi's highly acclaimed _Ship Breaker_ is a haunting and powerful story of loyalty, survival, and heart-pounding adventure. 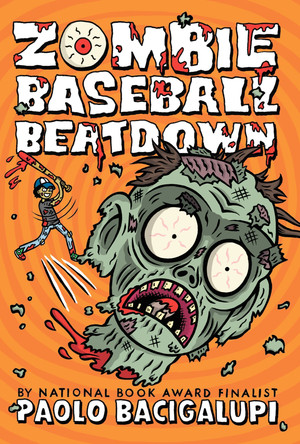 Paolo Bacigalupi - Zombie ​Baseball Beatdown
In ​this inventive, fast-paced novel, New York Times bestselling and Printz Award-winning author Paolo Bacigalupi takes on hard-hitting themes--from food safety to racism and immigration--and creates a zany, grand-slam adventure that will get kids thinking about where their food comes from. The zombie apocalypse begins on the day Rabi, Miguel, and Joe are practicing baseball near their town's local meatpacking plant and nearly get knocked out by a really big stink. Little do they know the plant's toxic cattle feed is turning cows into flesh-craving monsters! The boys decide to launch a stealth investigation into the plant's dangerous practices, unknowingly discovering a greedy corporation's plot to look the other way as tainted meat is sold to thousands all over the country. With no grownups left they can trust, Rabi and his friends will have to grab their bats to protect themselves (and a few of their enemies) if they want to stay alive...and maybe even save the world. Paolo Bacigalupi - Tool ​of War
This ​third book in a major series by a bestselling science fiction author, Printz Award winner, and National Book Award finalist is the gripping story of the most provocative character from his acclaimed novels Ship Breaker and The Drowned Cities. Tool, a half-man/half-beast designed for combat, is capable of so much more than his creators had ever dreamed. He has gone rogue from his pack of bioengineered "augments" and emerged a victorious leader of a pack of human soldier boys. But he is hunted relentlessly by someone determined to destroy him, who knows an alarming secret: Tool has found the way to resist his genetically ingrained impulses of submission and loyalty toward his masters... The time is coming when Tool will embark on an all-out war against those who have enslaved him. From one of science fiction's undisputed masters comes a riveting page-turner that pulls no punches. "Suzanne Collins may have put dystopian literature on the YA map with 'The Hunger Games'...but Bacigalupi is one of the genre's masters, employing inventively terrifying details in equally imaginative story lines." --Los Angeles Times Paolo Bacigalupi - The ​Alchemist
Magic ​has a price. But someone else will pay. Every time a spell is cast, a bit of bramble sprouts, sending up tangling vines, bloody thorns, and threatening a poisonous sleep. It sprouts in tilled fields and in neighbors' roof beams, thrusts up from between street cobbles, and bursts forth from sacks of powdered spice. A bit of magic, and bramble follows. A little at first, and then more--until whole cities are dragged down under tangling vines and empires lie dead, ruins choked by bramble forest. Monuments to people who loved magic too much. In paired novellas, award-winning authors Tobias Buckell and Paolo Bacigalupi explore a shared world where magic is forbidden and its use is rewarded with the axe. A world of glittering memories and a desperate present, where everyone uses a little magic, and someone else always pays the price. 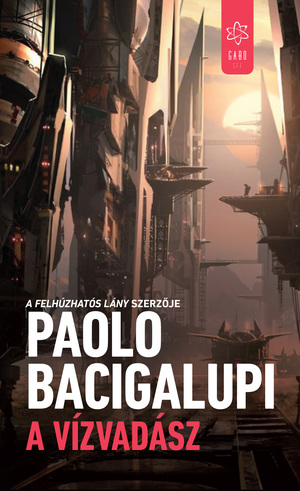