Jim C. Hines - Goblin ​Hero
After ​barely surviving an adventure he never wanted, the scrawny little nearsighted goblin called Jig is now known as Jig Dragonslayer, and has the power of healing, thanks to the forgotten god he worships. But being a hero isn't all it's cracked up to be. Not when the goblin leader wants him dead, and everyone else actually expects him to keep doing heroic-and incredibly dangerous-things. 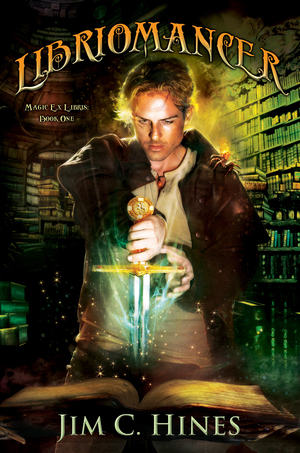 Jim C. Hines - Libriomancer
Isaac ​Vainio has spent the past two years working at the Copper River Library in northern Michigan, secretly cataloguing books for their magical potential, but forbidden from using that magic himself . . . except for emergencies. Emergencies like a trio of young vampires who believe Isaac has been killing their kind, and intend to return the favor. Isaac is a libriomancer, brilliant but undisciplined, with the ability to reach into books and create objects from their pages. And attacking a libriomancer in his own library is never a good idea. But vampires are only the beginning. This was merely the latest in a series of attacks against members of Die Zwelf Portenære, a secret organization founded five centuries ago by Johannes Gutenberg to protect the world from supernatural threats. Among the casualties is Ray Walker, Isaac’s friend and mentor in magic. Complicating matters further is the arrival of a dryad named Lena Greenwood. Lena packs a pair of wooden swords and proves to be quite adept at helping to beat down various magical threats. She also seems to be a little too interested in Isaac . . . not that he minds. Yet Lena’s nature could make her a greater threat than any vampire. Along with a neurotic fire-spider named Smudge, Isaac and Lena set out to find and stop whoever is behind the attacks. But things are worse than Isaac imagined. An unknown killer of unimaginable power has been torturing and murdering humans and vampires alike. And Gutenberg, now more than six hundred years old, has disappeared. As Isaac searches for Gutenberg and the murderer, hoping they aren’t one and the same, he uncovers dark secrets about magic’s history and potential. Secrets which could destroy Die Zwelf Portenære and loose a magical war upon the world. If Isaac is to have any hope of preventing that war, he will have to truly master the magic of libriomancy. Assuming he doesn’t lose control and wipe himself from existence first. 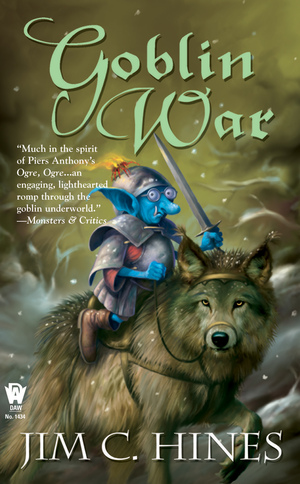 Jim C. Hines - Goblin ​War
If ​you think it's hard being a hobgoblin or a human, try living a goblin's life for a while. In fact, try imagining what it's like to be the runtiest goblin in the caves, the lone worshiper of a god who's been forgotten for a good reason, and the target everyone points to at the first hint of trouble. Try picturing yourself as Jig Dragonslayer, and see how you like it... Despite impossible odds, Jig was still alive. He'd survived an adventurer's quest against a dragon and a necromancer, a pixie invasion that had ogres and trolls dropping like flies, and, most frightening of all, the threat of being made chief of the goblins. He wasn't sure how much more he could stand. Naturally, he was about to find out. War was brewing in the world outside the Mountain, and when the goblin's lair was invaded by human warriors in search of the Rod of Creation, Jig knew it was just the start of another really bad day...

Jim C. Hines - Revisionary
When ​Isaac Vainio helped to reveal magic to the world, he dreamed of a utopian future, a new millennium of magical prosperity. One year later, things aren’t going quite as he’d hoped. An organization known as Vanguard, made up of magical creatures and ex-Porters, wants open war with the mundane world. Isaac’s own government is incarcerating “potential supernatural enemies” in prisons and internment camps. And Isaac finds himself targeted by all sides. It’s a war that will soon envelop the world, and the key to victory may lie with Isaac himself, as he struggles to incorporate everything he’s learned into a new, more powerful form of libriomancy. Surrounded by betrayal and political intrigue, Isaac and a ragtag group of allies must evade pursuit both magical and mundane, expose a conspiracy by some of the most powerful people in the world, and find a path to a better future. But what will that future cost Isaac and the ones he loves? Jim C. Hines - Goblin ​Quest
Jig ​the goblin was the runtiest member of an admittedly puny race. Jig was scrawny, so nearsighted as to be almost blind, and had sich a poor self-image that when he chose a god to worship it was one of the forgotten ones - after all, what other sort of god would have him as worshiper? He also had a cowardly fire-spider for a pet, a creature that was likely to set your hair on fire if it got into a panic. Made to stand tunnel watch by the goblin bullies who'd been assigned the job, it was just Jig's luck to be taken captive by a group of adventurers - with the usual complement of a dwarf warrior, a prince out to prove himself, his mad wizard brother, and an elfin thief. Forced to guide this ill-fated party on their search for the Rod of Creation - though Jig had no more idea how to find it than they did - he soon had them stumbling into every peril anyone had ever faced in the fantasy realms. And they hadn't even found the Necromancer or the Dragon yet! Jim C. Hines - The ​Mermaid’s Madness
There ​is an old story — you might have heard it — about a young mermaid, the daughter of a king, who saved the life of a human prince and fell in love. So innocent was her love, so pure her devotion, that she would pay any price for the chance to be with her prince. She gave up her voice, her family, and the sea, and became human. But the prince had fallen in love with another woman. The tales say the little mermaid sacrificed her own life so that her beloved prince could find happiness with his bride. The tales lie. 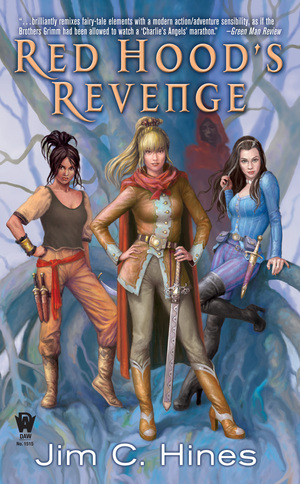 Jim C. Hines - Red ​Hood’s Revenge
Roudette’s ​story was a simple one. A red cape. A wolf. A hunter. Her mother told her she would be safe, so long as she kept to the path. But sometimes the path leads to dark places. Roudette is the hunter now, an assassin known throughout the world as the Lady of the Red Hood. Her mission will take her to Arathea and an ancient fairy threat. At the heart of the conflict between humans and fairies stands the woman Roudette has been hired to kill, the only human ever to have fought the Lady of the Red Hood and survived: The princess known as Sleeping Beauty. Jim C. Hines - The ​Snow Queen's Shadow
When ​a spell gone wrong shatters Snow White's enchanted mirror, a demon escapes into the world. The demon's magic distorts the vision of all it touches, showing them only ugliness and hate. It is a power that turns even friends and lovers into mortal foes, one that will threaten humans and fairies alike. 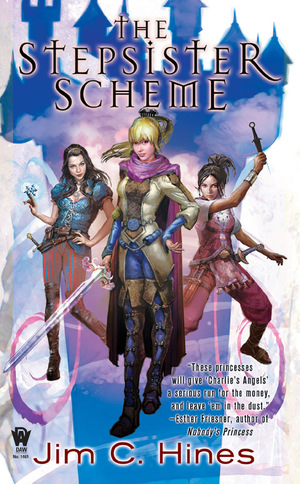 Jim C. Hines - The ​Stepsister Scheme
Cinderella–whose ​real name is Danielle Whiteshore (nee Danielle de Glas)–does marry Prince Armand. And if you can ignore the pigeon incident, their wedding is a dream come true. But not long after the “happily ever after,” Danielle is attacked by her stepsister Charlotte, who suddenly has all sorts of magic to call upon. And though Talia–otherwise known as Sleeping Beauty–comes to the rescue (she’s a martial arts master, and all those fairy blessings make her almost unbeatable), Charlotte gets away. That’s when Danielle discovers a number of disturbing facts: Armand has been kidnapped and taken to the realm of the Fairies; Danielle is pregnant with his child; and the Queen has her own very secret service that consists of Talia and Snow (White, of course). Snow is an expert at mirror magic and heavy duty flirting. Can the three princesses track down Armand and extract both the prince and themselves from the clutches of some of fantasyland’s most nefarious villains? 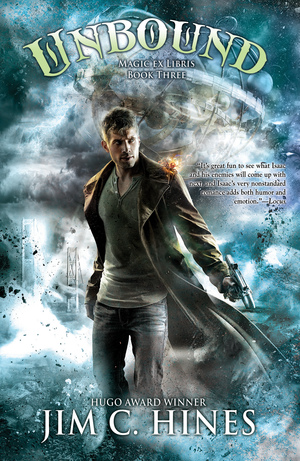 Jim C. Hines - Unbound
For ​five hundred years, the Porters have concealed the existence of magic from the world. Now, old enemies have revealed the Porters’ secrets, and an even greater threat lurks in the shadows. The would-be queen Meridiana, banished for a thousand years, has returned in the body of a girl named Jeneta Aboderin. She seeks an artifact created by Pope Sylvester II, a bronze prison that would grant her the power to command an army of the dead. Michigan librarian Isaac Vainio is powerless to stop her, having been stripped of his power and his place among the Porters by Johannes Gutenberg himself. But Isaac is determined to regain his magic and to rescue his former student Jeneta. With no magic of his own, Isaac’s must delve into the darker side of black-market magic, where he will confront beings better left undisturbed, including the sorcerer Juan Ponce de Leon. With his loyal fire-spider Smudge, dryad warrior Lena Greenwood, and psychiatrist Nidhi Shah, Isaac races to unravel a mystery more than a thousand years old as competing magical powers battle to shape the future of the world. He will be hunted by enemies and former allies alike, and it will take all his knowledge and resourcefulness to survive as magical war threatens to spread across the globe. Isaac’s choices will determine the fate of his friends, the Porters, the students of Bi Sheng, and the world. Only one thing is certain: even if he finds a way to restore his magic, he can’t save them all… 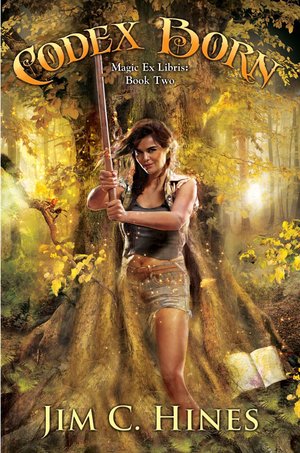 Jim C. Hines - Codex ​Born
Isaac ​Vainio’s life was almost perfect. He should have known it couldn’t last. Living and working as a part-time librarian in Michigan’s Upper Peninsula, Isaac had finally earned the magical research position he dreamed of with Die Zwelf Portenære, better known as the Porters. He was seeing a smart, fun, gorgeous dryad named Lena Greenwood. He had been cleared by Johannes Gutenberg to do libriomancy once again, to reach into books and create whatever he chose from their pages. Best of all, it had been more than two months since anything tried to kill him. And then Isaac, Lena, and Porter psychiatrist Nidhi Shah are called to the small mining town of Tamarack, Michigan, where a pair of septuagenarian werewolves have discovered the brutally murdered body of a wendigo. What begins as a simple monster-slaying leads to deeper mysteries and the discovery of an organization thought to have been wiped out more than five centuries ago by Gutenberg himself. Their magic rips through Isaac’s with ease, and their next target is Lena Greenwood. They know Lena’s history, her strengths and her weaknesses. Born decades ago from the pages of a pulp fantasy novel, she was created to be the ultimate fantasy woman, shaped by the needs and desires of her companions. Her powers are unique, and Gutenberg’s enemies mean to use her to destroy everything he and the Porters have built. But their plan could unleash a far darker power, an army of entropy and chaos, bent on devouring all it touches. The Upper Peninsula is about to become ground zero in a magical war like nothing the world has seen in more than five hundred years. But the more Isaac learns about Gutenberg and the Porters, the more he questions whether he’s fighting for the right cause. One way or another, Isaac must find a way to stop a power he doesn’t fully understand. And even if he succeeds, the outcome will forever change him, the Porters, and the whole world. 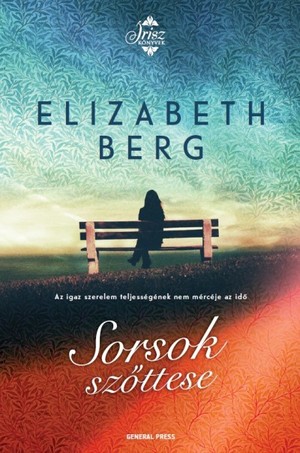