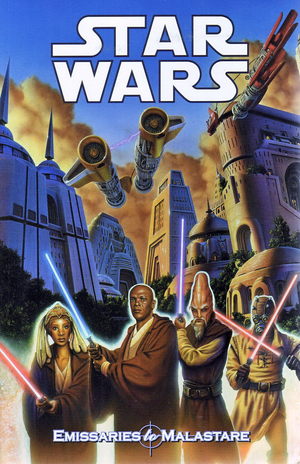 Timothy Truman - Star ​Wars: Republic - Emissaries to Malastare
In ​a time after the events of Episode I — The Phantom Menace, half of the Jedi High Council travel to the exotic world of Malastare to negotiate a peace treaty between two of that planet’s warring factions. But the whole affair is being manipulated by a secret, third party out to assassinate the Jedi! Add in the fact that Malastare is one of the few planets to allow the dangerous sport of Podracing and you can be sure that the Jedi are in for some extreme action! This story features many familiar characters from The Phantom Menace and continues the ongoing adventures that bridge the gap between Episodes I & II! 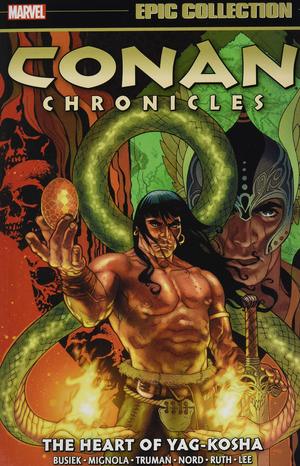 Kurt Busiek - Mike Mignola - Timothy Truman - Conan ​Chronicles Epic Collection 2. - The Heart of Yag-Kosh
The ​Tower of the Elephant and other stories! Conan the Barbarian stars in more legendary tales filled with swords, sorcery, giant spiders and monstrous creatures - including stories adapted from the original works of Robert E. Howard! Stealing the priceless gem the Heart of the Elephant from an unguarded tower seems like child's play -but nothing's ever easy for Conan! Then, a dalliance with a magistrate's wife spells trouble, and Conan's adventures in the City of Thieves continue as he runs a gauntlet of threats both human and inhuman! But what grotesque horrors await him in the Hall of the Dead? And is anybody ready for Conan...the King? Plus, tales of Conan's youth as he braves the Battle of Brita's Vale -and rides a wild Cimmerian bull! COLLECTING: VOL. 2: CONAN (2004) 20-39 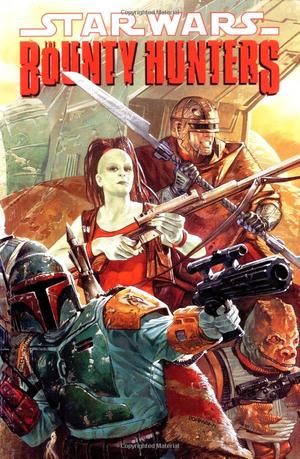 Andy Mangels - Mark Schultz - Randy Stradley - Timothy Truman - Star ​Wars: The Bounty Hunters
The ​Star Wars galaxy is populated by rogues, Rebels, and rabble-rousers. Many carry a hefty price on their heads, whether put there by criminal overlords like Jabba the Hutt or by the iron fist of the Galactic Empire. And where bounties are offered, bounty hunters will be there to claim them: the stealthy and merciless Aurra Sing; the fierce and relentless Bossk; the sly and mercenary Dengar; the calculating and precise 4-LOM; the audacious and deadly Kenix Kil; and the most feared manhunter of them all… Boba Fett! Four tales of life on the run created by a small army of comics luminaries, The Bounty Hunters is a must-read for Star Wars fans, predator and prey alike! Includes the popular—and hard to find—Boba Fett: Twin Engines of Destruction. 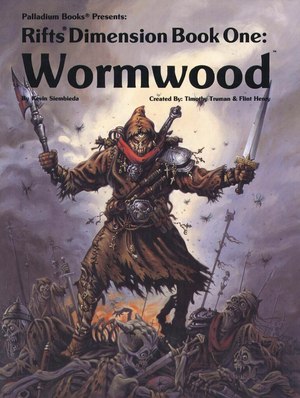 Kevin Siembieda - Timothy Truman - Flint Henry - Wormwood
Wormwood ​is the first of many dimension books to be presented by Palladium. A decadent, violent and deadly world ruled by demonic creatures and evil clergy who control powerful kingdoms of monsters and enslave humans. Inhuman destroyers who command the crawling towers and life force cauldrons to do their bidding. One of countless alien worlds linked to Rifts Earth by the many dimensional gateways of the ley lines. Highlights Include: - 17 new Occupational Character Classes & R.C.C.s including the Apok, Holy Terror, Worm Speaker, symbiotic warrior, knights of the Temple, priest and others. - A 20 page comic strip by Truman & Henry! - Over 30 horrific monsters, villains and characters. - Symbiotic magic, slime, augmentation and organisms. - Crystal magic, mystic weapons, technology and dark secrets. - The living planet is mapped and key forces described. 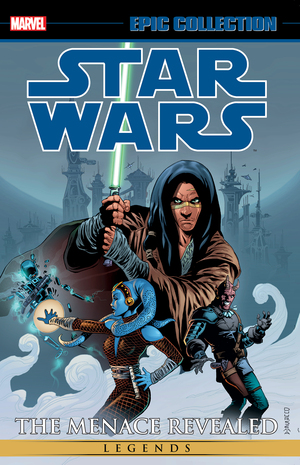 John Ostrander - Timothy Truman - Pat Mills - Doug Petrie - Star ​Wars Legends Epic Collection: The Menace Revealed 2.
Jedi ​Knight Quinlan Vos has lost his memory! Now he must rediscover his past while searching for his Padawan, Aayla Secura! But deadly gamblers, false Jedi, corrupt officials and the pull of the dark side all stand in his way! Then, lightsabers clash as the bounty hunter Aurra Sing arrives on Coruscant, slaying Jedi in the very shadow of the Temple! A number of Jedi Knights volunteer to take action - but do they seek justice, or vengeance? And when a prison planet watched over by the Guardians comes under attack from a deadly enemy, the still-troubled Quinlan Vos investigates - but his newest assignment may be a suicide mission! Plus more tales from the Republic era of Star Wars! 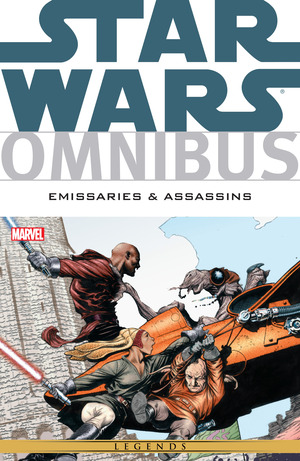 Timothy Truman - Ryder Windham - Mark Schultz - Henry Gilroy - Haden Blackman - Star ​Wars Omnibus: Emissaries and Assassins
Discover ​more stories set during the time of Episode I: The Phantom Menace in this mega collection bridging the gap between Episodes I and II! Star Wars: Episode I Adventures is a group of four tales featuring Anakin Skywalker, Queen Amidala, Obi-Wan, and Qui-Gon all set during the events of Episode I! Then, in Emissaries to Malastare, Outlander, and Jango Fett: Open Seasons, we get a closer look at members of the Jedi Council, Jedi-slaying bounty hunter Aurra Sing, and the life of bounty hunter Jango Fett - the man without whom there would be no Clone Wars! 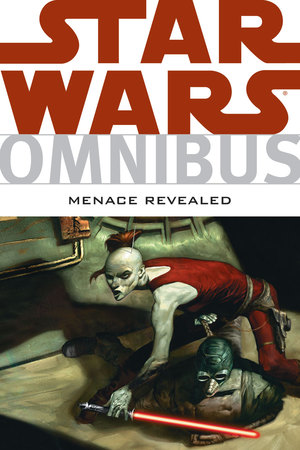 Hayden Blackman - Ryder Windham - Jason Hall - Timothy Truman - Star ​Wars Omnibus: Menace Revealed
This ​is Dark Horse's largest omnibus of never-before-collected and out-of-print Star Wars stories. Included here are one-shot adventures, short story arcs, specialty issues, and early Dark Horse Extra comic strips! All of these tales take place after Episode I: The Phantom Menace, and lead up to Episode II: Attack of the Clones. In Jedi Quest, Anakin Skywalker will work to overcome his fears while on a mission to protect a freighter from pirates. Starfighter: Crossbones pits pirate against pirate, featuring the intimidating Captain Nym. Included in this volume are The Hunt for Aurra Sing and The Bounty Hunters: Aurra Sing, plus many more stories which have not seen print in nearly a decade! 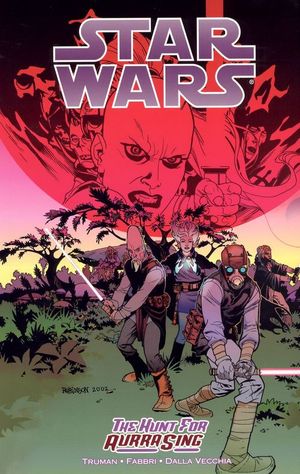 Timothy Truman - Star ​Wars: Republic - The Hunt for Aurra Sing
Get ​ready for some electrifying lightsaber battle action! Aurra Sing arrives on Coruscant with a mean streak, killing Jedi within the very shadows of the Temple. The Jedi Council must now decide how to deal with the infamous bounty hunter whose favorite targets are Jedi. Several Jedi Knights volunteer for the honor of bringing Sing to justice. But do they want justice, or vengeance? It's going to take more than a grudge to bring down an assassin with a reputation for killing Jedi and a collection of previously owned lightsabers to back it up. 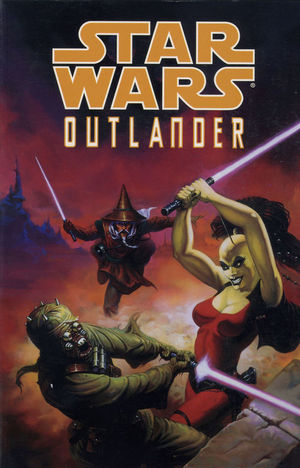 Timothy Truman - Star ​Wars: Republic - Outlander
Ki-Adi-Mundi's ​first assignment after joining the Jedi Council will take him back to the fearsome desert wastelands of Tatooine. The Jedi Council has tracked a long wayward and powerful Jedi, Sharad Hett of the Sand People, to the backwater world, and it's up to Ki to find him and convince him to return. Only two things stand in his way: the vicious krayt dragon of Tatooine and the Jedi-slaying bounty hunter Aurra Sing! Ki has little choice but to ask for help from the slimiest crime lord of them all, Jabba the Hutt -- and Jabba's aid always comes with a price! Outlander is full-throttle, white-knuckle Episode I-era adventure! 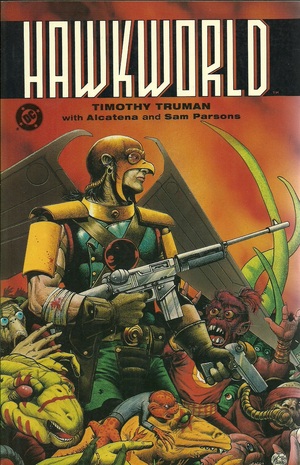