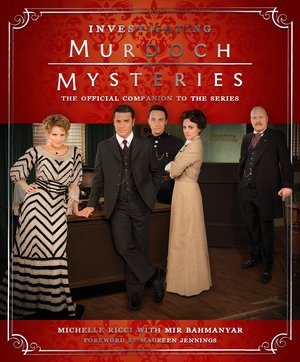 Michelle Ricci - Mir Bahmanyar - Maureen Jennings - Investigating ​Murdoch Mysteries
Based ​on Maureen Jennings' award-winning novels, at the end of the Victorian era, Toronto-based police detective William Murdoch uses radical forensic techniques, including fingerprinting and trace evidence, to solve some of the city’s most gruesome murders. His unconventional approach often elicits skepticism from his colleagues, though he is usually supported by his boss Inspector Brackenreid, young Constable George Crabtree, and doctors/pathologists Emily Grace and Julia Ogden. This companion looks at every aspect of all 8 seasons of the show, from the regular characters and their relationships, to the history of the period, including figures Murdoch encounters, the forensic and scientific advances he utilises, and Murdoch’s most notable cases. The companion also goes behind the scenes on the show to examine every aspect of the production, including sets, costumes, music and writing. 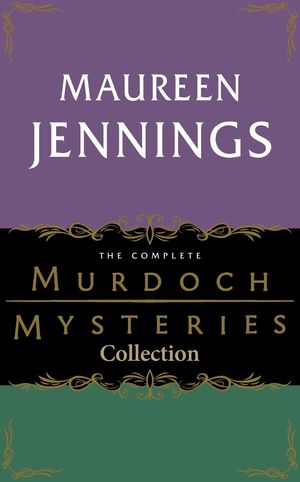 Maureen Jennings - The ​Complete Murdoch Mysteries Collection
The ​books that inspired the wildly popular TV series -- known as the Murdoch Mysteries in Canada and as The Artful Detective in the United States -- are available together for the first time in this seven-volume eBook bundle that brings the crime-ridden world of late-19th-century Toronto alive. "If you want to step back in time . . . let Jennings be your guide. There's really none better." — Ottawa Citizen From his debut in Except the Dying, where he pursued the secrets behind a young, pregnant servant girl's death through brothels and drawing rooms, to his immersion in the Dickensian world of workhouses in Vices of My Blood, and the investigation of his own dark family history in Let Loose the Dogs, Detective William Murdoch has been one of crime fiction's most fascinating and engaging protagonists. These seven riveting novels— inspiration for the internationally popular Murdoch Mysteries television series— blend masterful storytelling, vivid characters, and an extraordinary eye for the rich history of Victorian Toronto to create modern classics; they are must-reads for every mystery lover. "Murdoch's warm heart makes him the right sleuth for this cold city." — New York Times "Vivid . . . heartwrenching." — Publishers Weekly (about Under the Dragon's Tail) "Jennings immerses her readers in the Toronto of the 1890s. The smells, sights, and sounds she describes ring as true as if she were recounting a trip she'd made there last week." — Quill & Quire 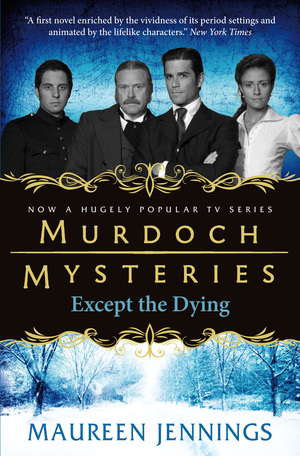 Except ​the Dying Maureen Jennings
0

Maureen Jennings - Except ​the Dying
In ​the cold Toronto winter of 1895, the unclad body of a servant girl is found frozen in a deserted laneway. Detective William Murdoch quickly finds out that more than one person connected with the girl’s simple life has something to hide.

Maureen Jennings - Beware ​This Boy
November, ​1940. Tom Tyler, Detective Inspector of the small Shropshire town of Whitchurch, is a troubled man. The preceding summer had been a dark one for Britain, and even darker for Tom's own family and personal life. So he jumps at the opportunity to help out in the nearby city of Birmingham, where an explosion in a munitions factory has killed or badly injured several of the young women who have taken on dangerous work in support of the war effort. At first, it seems more than likely the explosion was an accident, and Tom has only been called in because the forces are stretched thin. But as he talks to the employees of the factory, inner divisions -- between the owner and his employees, between unionists and workers who fear communist infiltration -- begin to appear. Put that together with an AWOL young soldier who unwittingly puts all those he loves at risk and a charming American documentary filmmaker who may be much more than he seems, and you have a page-turning novel that bears all the hallmarks of Maureen Jennings' extraordinary talent: a multi-faceted mystery, vivid characters, snappy dialogue, and a pitch-perfect sense of the era of the Blitz, when the English were pushed to their limits and responded with a courage and resilience that still inspires. 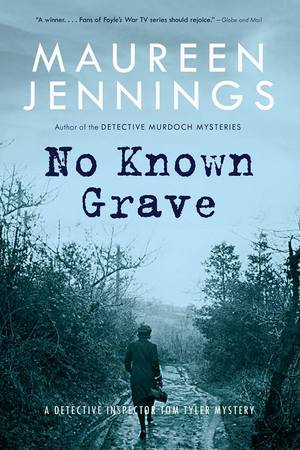 Maureen Jennings - No ​Known Grave
It ​is the summer of 1942, and after two difficult years, DI Tom Tyler is making a fresh start in Ludlow, Shropshire. On the outskirts of town, St. Anne’s Convalescent Hospital, staffed by nursing sisters who are also Anglican nuns, has been established in an old manor house to help victims of the war. But their peace is shattered when a horrifying double murder is discovered on the grounds. Tyler must discover how the crime was committed in such a secluded place, where most of the patients are unable to walk, and many are deeply traumatized. When he begins to receive mysterious letters recounting terrible crimes, he realises that he is not only seeking a murderer, but that the horrors of the war are closing in on this place that was meant to be a refuge. 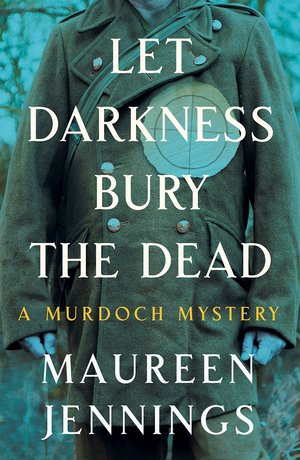 Maureen Jennings - Let ​Darkness Bury the Dead
Canada's ​premier author of historical mystery fiction returns with a brand new and highly anticipated Murdoch Mystery, with an older and wiser Detective Murdoch. It is November 1917. The Great War is grinding on, chewing up young men by the thousands. Initially, in the loyal Dominion of Canada, people are mostly eager to support the Motherland and fight for the Empire. Men perceived as slackers or cowards are shunned. But the carnage is horrendous and with enforced conscription, the enthusiasm for war is dimming. William Murdoch is a widower, a senior detective who, thanks to the new temperance laws, spends his time tracking down bootleggers and tipplers; most unsatisfying. His wife, Amy, died giving birth to their second child, a girl who lived only a few hours more. Murdoch, racked by grief, withdrew from four-year-old, Jack. This he regrets and would dearly love to make up for his negligence. As we enter the story, Jack, now twenty-one, has returned from France after being wounded and gassed at the Battle of Passchendaele. It is soon apparent that he is deeply troubled but he's not confiding in his father. He does, however, seem to be bound by shared secrets to another wounded former soldier, Percy McKinnon. Murdoch suddenly has much more serious crimes than rum-running on his hands. The night after Jack and McKinnon arrive home, a young man is found stabbed to death in the impoverished area of Toronto known as the Ward. Soon after, Murdoch has to deal with a tragic suicide, also a young man. Two more murders follow in quick succession. The only common denominator is that all of the men were exempted from conscription. Increasingly worried that Jack knows more than he is letting on, Murdoch must solve these crimes before more innocents lose their lives. It is a solution that will give him only sorrow. 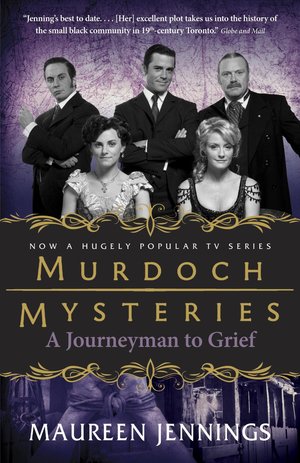 A ​Journeyman to Grief Maureen Jennings
0

Maureen Jennings - A ​Journeyman to Grief
The ​abduction of a young woman in 1858 ends in Toronto thirty-eight years later — in murder. In 1858, a young woman on her honeymoon is forcibly abducted and taken across the border from Canada and sold into slavery. Thirty-eight years later, Detective Murdoch is working on a murder case that will take all of his resourcefulness to solve. The owner of one of Toronto’s livery stables has been found dead. He has been horsewhipped and left hanging from his wrists in his tack room, and his wife claims that a considerable sum of money has been stolen. Then a second man is also murdered, his body strangely tied as if he were a rebellious slave. Murdoch has to find out whether Toronto’s small “coloured” community has a vicious murderer in its midst — an investigation that puts his own life in danger. Maureen Jennings’s trademark in her popular and acclaimed Detective Murdoch series is to reveal a long-forgotten facet about life in the city that dispels any notion that it really ever was “Toronto the Good.” As well, in A Journeyman to Grief, an exceptionally well plotted and engrossing story, she shows just how a great harm committed in the past can erupt fatally in the present. 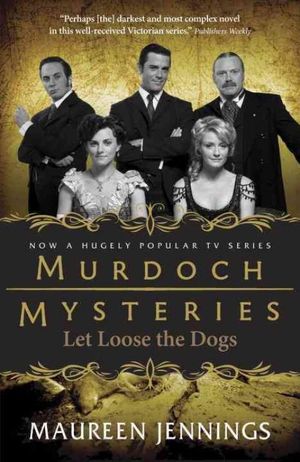 Maureen Jennings - Let ​Loose the Dogs
In ​Let Loose the Dogs, Murdoch’s life and work overlap tragically. His sister, who long ago fled to a convent to escape their abusive father, is on her deathbed. Meanwhile, Harry Murdoch, the father whom Murdoch long ago shut out of his life, has been charged with murder and calls on his estranged son to prove his innocence. But, knowing his father, what is Murdoch to believe? 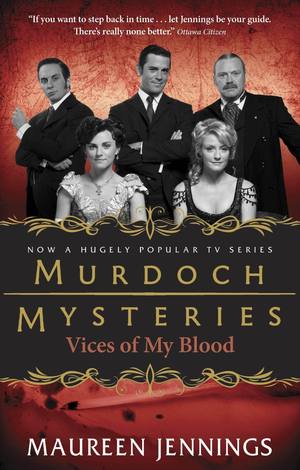 Vices ​of My Blood Maureen Jennings
0

Maureen Jennings - Vices ​of My Blood
The ​compelling new novel by Canada’s answer to Anne Perry. In his forties, the Reverend Charles Howard still cut an impressive figure. A married Presbyterian minister in Toronto’s east end, Howard was popular with the congregation that elected him, especially with the ladies, and most particularly with Miss Sarah Dignam. Respected in the community, Howard, as Visitor for the House of Industry, sat in judgment on the poor, assessing their applications for the workhouse. But now Howard is dead, stabbed and brutally beaten by someone he invited into his office. His watch and boots are missing. Has some poor beggar he turned down taken his vengeance? Murdoch’s investigation takes him into the arcane Victorian world of queer plungers — men who fake injury all the better to beg — and the destitute who had nowhere left to turn when they knocked on the Reverend Howard’s door. 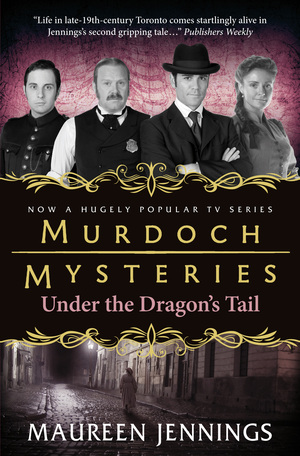 Under ​the Dragon's Tail Maureen Jennings
0

Maureen Jennings - Under ​the Dragon's Tail
Women ​rich and poor come to her, desperate and in dire need of help - and discretion. Dolly Merishaw is a midwife and an abortionist in Victorian Toronto, but although she keeps quiet about her clients' condition, her contempt for them and her greed leaves every one of them resentful and angry. So it comes as no surprise to Detective William Murdoch when this malicious woman is murdered. What is a shock, though, is that a week later a young boy is found dead in Dolly's squalid kitchen. Now, Murdoch isn't sure if he's hunting one murderer - or two. 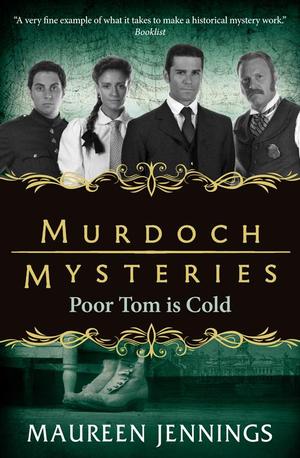 Maureen Jennings - Poor ​Tom Is Cold
In ​this third adventure featuring the lovable detective William Murdoch, he becomes involved with the apparent suicide of Constable Oliver Wicken – a man who was the sole support of his mother and invalid sister. But further investigation by Detective Murdoch takes him far afield and he begins to suspect that the Eakin family, whose house adjoins the one where Wicken died, is more involved with the case than they admit. Whether describing a tooth extraction, the unquestioning prejudice toward the few Chinese immigrants in the city, or the well-intentioned, but bizarre, treatment of mentally ill women, Maureen Jennings once again brings the period vividly to life. 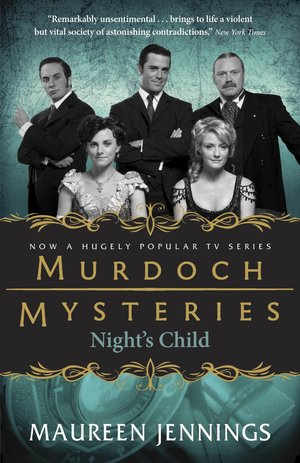 Maureen Jennings - Night's ​Child
After ​thirteen-year-old Agnes Fisher faints at school, her teacher, the young and still idealistic Amy Slade, is shocked to discover in the girl’s desk two stereoscopic photographs. One is of a dead baby in its cradle, and on the back Agnes has scrawled a terrible message. Worse, the other photograph is of Agnes in a pose captioned “What Mr. Newly Wed Really Wants.” When Agnes doesn’t show up at school the next day, her teacher takes the two photographs to the police. Murdoch, furious at the sexual exploitation of such a young girl, resolves to find the photographer – and to put him behind bars. Night’s Child is the fifth novel in Maureen Jennings’s highly praised historical mystery series. Three of Jennings’s novels have been made into TV movies under the title Murder 19C: The Murdoch Mysteries. Bravo/CHUM is currently developing a series based on the character of Detective William Murdoch for broadcast in 2007