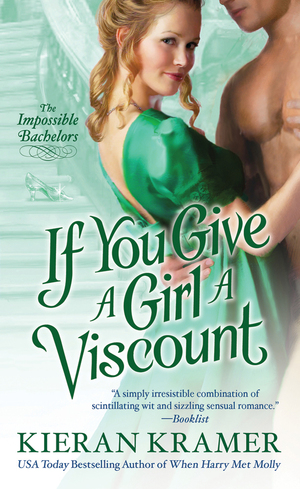 If ​You Give a Girl a Viscount Kieran Kramer
0

Kieran Kramer - If ​You Give a Girl a Viscount
All ​the single ladies want him. If life were a fairy tale, Daisy Montgomery’s stepmother and two stepsisters would surely be cast in the wicked roles. For years, they’ve made life miserable for Daisy. But when she discovers she has a godmother, she’s determined to ask her for help. Little did Daisy expect her godmother to play matchmaker with her very own grandson—who happens to be a viscount! Is he ready to put a ring on it? A freewheeling playboy, Charles Thorpe, Viscount Lumley, is bored with his wealth-seeking female admirers. Not only that, he’s been cut off from the family coffers. One day, on a bet, he rids himself of what little money he has left in his pockets and vows to solve problems using his wits alone. But when the Impossible Bachelor is confronted with Daisy’s plan to save her castle, the payoff is more than he could have bargained for. Sometimes, if you give a girl a viscount, you just might find love….

Kieran Kramer - When ​Harry Met Molly
_He’s ​always been a player._ Dashing Lord Harry Traemore is perfectly content to live out his days in the pursuit of pleasure. But when he’s named by the Prince Regent as one of society’s “Impossible Bachelors,” Harry is drafted into a ribald romantic wager. The rules of engagement are scandalously simple: The bachelor whose mistress wins the title of “Most Delectable Companion” gets to remain unmarried. Harry is utterly unconcerned about his status…until his latest lightskirt abandons him. _Who will win this game of love?_ Enter Lady Molly Fairbanks. Harry’s childhood friend—actually, “foe” is more like it—is the most unlikely companion of all. She’s attractive but hot-headed, and in no mood for games. Besides, what could the self-indulgent Harry possibly know about what makes a woman delectable? It’s time for Molly to teach him a lesson once and for all…but will it lead to “happily ever after?”