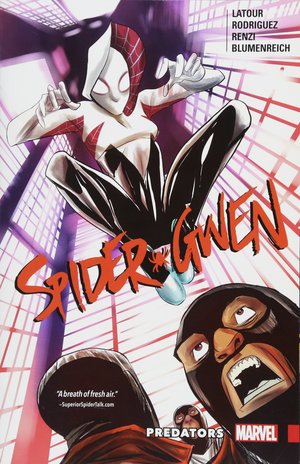 Jason Latour - Spider-Gwen ​4. - Predators
After ​her adventure with Miles Morales, Gwen finds herself thrown into her toughest, most intense encounter yet. One word: Gwenom! It's the mash-up to end all mash-ups, but the stakes are very high and the consequences are very real! Will Spider-Gwen be able to get through this new challenge in one piece? SPIDER-GWEN 19-23 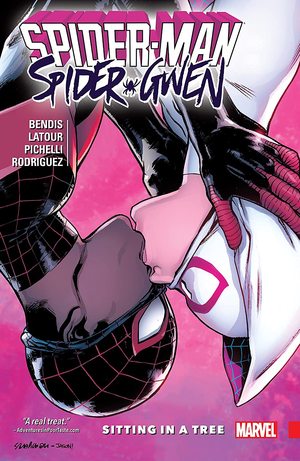 Brian Michael Bendis - Jason Latour - Spider-Man/Spider-Gwen: ​Sitting in a Tree
K-I-S-S-I-N-G! ​That's just one of the things that makes this a very modern Marvel team-up, as the two most sensational web-spinners of the 21st century cross paths - and lock lips! Miles Morales and Gwen Stacy are two young heroes from different Earths, but what threat could unite the Spider-Man and Spider-Woman of the new generation? The answer will rock both their worlds! Not for the first time, Miles will find himself in another universe - and he's in pursuit of someone he holds dear. But will that description soon apply to Gwen? Or, as the stakes are raised, will this spider-crossed pair see teen romance give way to arachnid animosity? First comes love, then comes much worse, then comes chaos in the Multiverse! Collects: _Spider-Man_ (2016) #12-14 and _Spider-Gwen_ (2015) #16-18 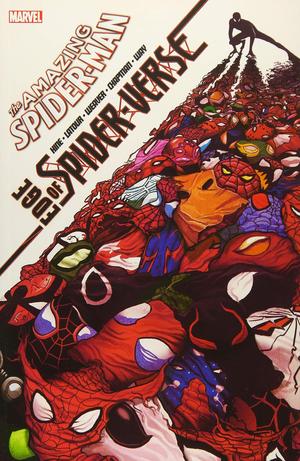 David Hine - Fabrice Sapolsky - Jason Latour - Dustin Weaver - Clay Chapman - Gerard Way - Edge ​of Spider-Verse
Peer ​over the edge of the Spider-Verse, at five different realities...and five daringly different spiders! Spider-Man Noir returns, as the Peter Parker of the 1930s finds himself up against Mysterio, and knee-deep in the biggest Spider-Man event of all! What is the secret of Dr. Aaron Aikman, the Spider-Man? Who are the villainous Red Eye and Naahmurah...and can Aaron live through Morlun's arrival? In a universe where the story you know becomes as horrific as possible, a radioactive spider bites a high school nerd who is already something of a monster. Then, what or who is the incredible SP//dr? And finally, the breakout character of Spider-Verse makes her exciting debut - in a world where the radioactive spider bit Gwen Stacy! Collects Edge of Spider-Verse issues 1 to 5. 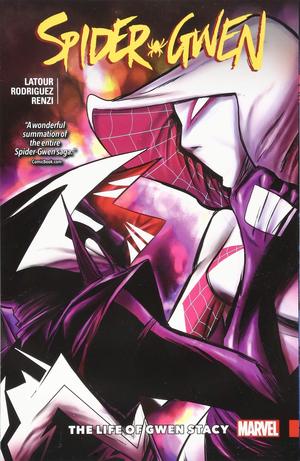 Spider-Gwen ​6. - The Life and Times of Gwen Stacy Jason Latour
0

Jason Latour - Spider-Gwen ​6. - The Life and Times of Gwen Stacy
To ​defeat Matt Murdock, the Kingpin of her dimension, Gwen has to let Venom win] But there's a problem if Murdock dies, then so does Gwen] But that's the least of her worries, as after recent events Gwen has found herself on a one-way road into darkness. And the only one that can help her find her way back to the light... is Gwen Stacy. Is the universe trying to save her, or does fate only hold one end for Gwen? And will the drastic move of going public with her double identity fix the timeline -and more importantly, get Gwen out from under the Kingpin's thumb? Or will it just add one more layer of complication to Gwen's already impossible life? Spider-Gwen 30-34 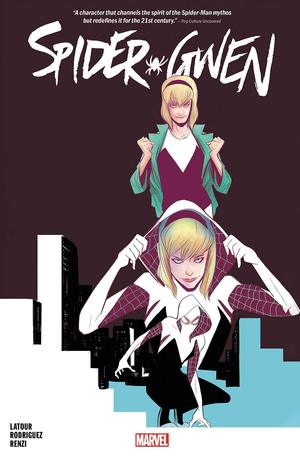 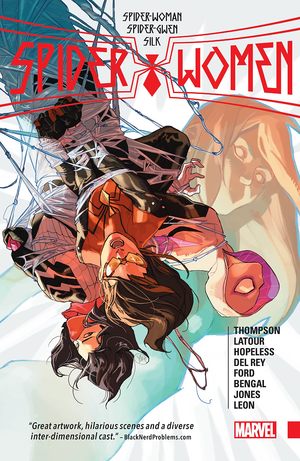 Robbie Thompson - Jason Latour - Dennis Hopeless - Spider-Women
The ​Spider-Women of two worlds join Silk for a story too big for just one of their books! New mother Jessica Drew is taking a mentor role with Silk and Spider-Gwen, and the trio enjoys a brunch break on Gwen's Earth-65. But when nefarious spy organization S.I.L.K. and its leader - a certain Cindy Moon - notice the interdimensional interlopers, everything goes wrong! Can the arachnid adventurers find a way home, or will they be trapped in a world they never made? And if they do escape Earth-65, will their troubles follow? Jess meets the Mary Janes, and Silk comes face-to-face with her counterpart's family - but who's looking after little baby Drew? It's an epic that will shake all three Spider-Women to the core! Collects: - _Spider-Women Alpha_ (2016), - _Silk_ (2015 2nd Series) #7-8, - _Spider-Gwen_ (2015 2nd Series) #7-8, - _Spider-Woman_ (2015 6th Series) #6-7, - _Spider-Women Omega_ (2016). 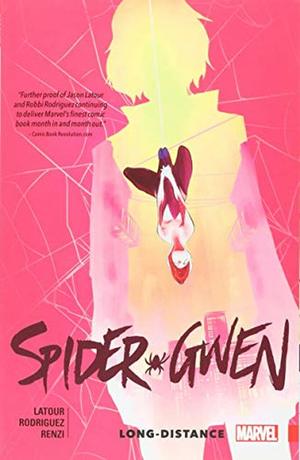 Jason Latour - Spider-Gwen ​3. - Long Distance
Will ​Thanksgiving be a happy one for Spider-Gwen and friends? That very much depends on what crime lord Matt Murdock and his ninjas bring to dinner! It's time for Gwen Stacy to stop running from Earth-65's Kingpin of Crime - but Matt may have a thing or two to teach the budding Spider-Woman! COLLECTING: SPIDER-GWEN 14-18 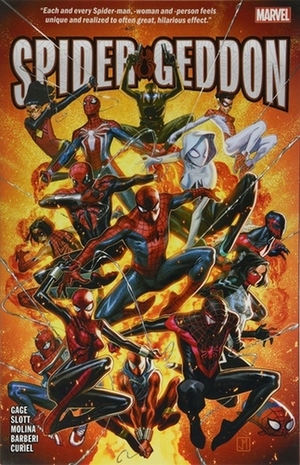 Christos N. Gage - Jed MacKay - Lonnie Nadler - Zac Thompson - Gerard Way - Jason Latour - Aaron Kuder - Edge ​of Spider-Geddon
Every ​world has its spider! Spider-Punk is back and better than ever, tackling his home dimension's problems with arachnid attitude! And witness the next chapter in the life of Peni Parker, A.K.A. the fan-favorite SP//dr! But the amazing, spectacular alternate-reality heroes don't stop there! In one universe, when Uncle Ben is shot in a mugging, Peter Parker's radioactive blood donation turns Ben into a Spider-Hero too! And then there's the Earth where industrialist Norman Osborn received the arachnid bite - and changed the world as a very different Spider-Man! But what's Superior to a spider? An Octopus! And you won't believe what Otto Octavius, in his new body, is up to as the savior of San Francisco! Experience the stories that set the stage for the Spidey event of the year: Spider-Geddon! Collects: _Edge of Spider-Geddon_ (2018) #1-4 and _Superior Octopus_ (2018) 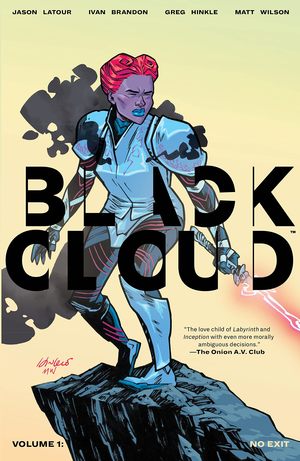 Jason Latour - Ivan Brandon - Black ​Cloud 1. - No Exit
Zelda's ​about to start a war of dreams. In the days when story and reality were one, the old blood -- people with the power to shape stories -- built a new world to escape the future we all came to live in. Generations later, Zelda rejects the old blood's dreams and escapes into our world to run from destiny. But destiny has a nasty way of catching up to you. From the creators of Spider-Gwen, Southern Bastards, Drifter, and Airboy come a new fantasy where heroes are hard to find. Collects issues 1 – 5. 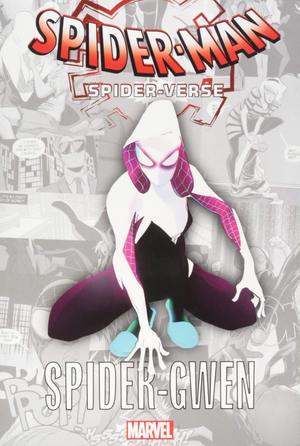 Jason Latour - Spider-Man: ​Spider-Verse - Spider-Gwen
The ​Spider-Verse is full of danger for Spider-Gwen! What if Gwen Stacy was bitten by the radioactive spider, not Peter Parker? Find out on Earth-65! There, Gwen is the spectacularly misunderstood Spider-Woman - and she's wanted for Peter's death! And that's bad news, especially since Gwen's dad is a cop! When a Lizard-like menace runs amok it brings back painful memories for Gwen - but will Captain America's mighty shield inflict new ones? Web-slinging doesn't leave much time for Gwen to play drums--but when she does, her band, the Mary Janes, rock hard! And their rivals, Felicia Hardy and the Black Cats, are about to find out just how hard! Then, on Halloween, the Mary Janes share a night to remember...courtesy of Mysterio! Collecting: Edge of Spider-Verse #2, Spider-Gwen (2015A) #50 and Spider-Gwen (2015B) #1-2 and #13. 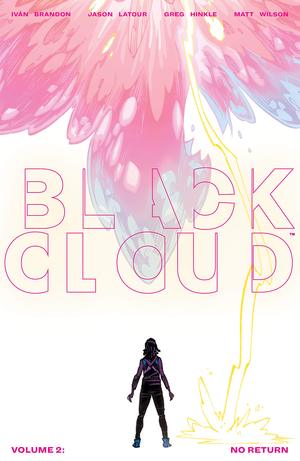 Jason Latour - Ivan Brandon - Black ​Cloud 2. - No Return
Frank ​is stuck in the middle as Zelda's world deals with the aftermath of the disaster she caused... a world that finally has to address how profoundly dangerous Zelda Barrett is. From the creators of Southern Bastards, Drifter, and Airboy comes to a fantasy story where heroes are hard to find. Collects issues 6 - 10. 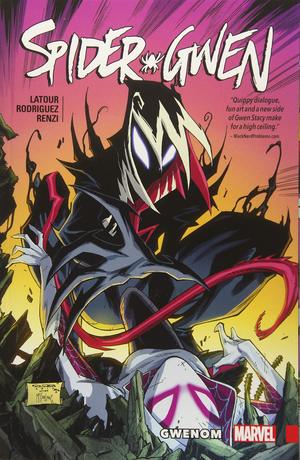 Jason Latour - Spider-Gwen ​5. - Gwenom
The ​aftermath of the "Predators" storyline leaves Gwen in a very different place. Matt Murdock's plans all come home to roost, and when you know how our good friend Murderdock plans, you know that ain't pretty. What is the next evolutionary step for Spider-Gwen?! And Gwen's life irrevocably changes as she bonds with her universe's version of the Venom Symbiote. What does it mean for her relationship with crime kingpin Matt Murdock? With her father? With the Osborns?! SPIDER-GWEN 24-28 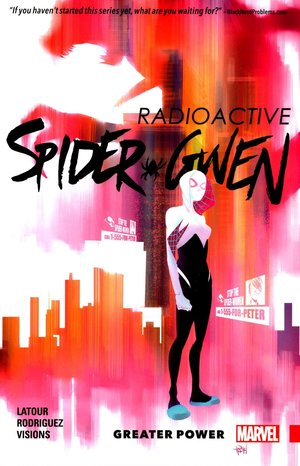 Jason Latour - Spider-Gwen ​1. - Greater Power
Gwen ​Stacy is back in the webs and has an all-new mystery to solve: the reappearance of the Lizard! The Spider-Woman of Earth-65 was convinced that the Lizard died along with Peter Parker. But a new reptilian rampage leaves her with doubts not only about Peter's life but his death as well. Troubles begin to mount as the Osborns of Gwen's world make their debut, and she finds herself on S.H.I.E.L.D.'s wanted list! Perhaps some wise words from a mentor figure could help - how about Jessica Drew, the Spider-Woman of Earth-616? SPIDER-GWEN 1-6 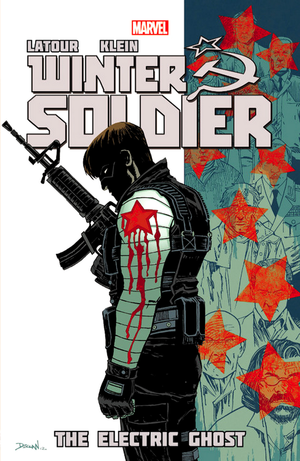 Jason Latour - Winter ​Soldier 4. - The Electric Ghost
All-new ​mission! All new creative team! All new status quo! Join writer Jason Latour (Loose Ends, WOLVERINE) and artist Nic Klein (Dancer, Viking, Doc Savage) as they take the reins of the critically acclaimed series! In the wake of the hunt for the Black Widow, a broken and beaten Winter Soldier begins perhaps his most personal mission yet: a quest for redemption. But as Bucky looks to make peace with his deadly past, a new villain from his future is out for war...and blood. COLLECTING: Winter Soldier 15-19 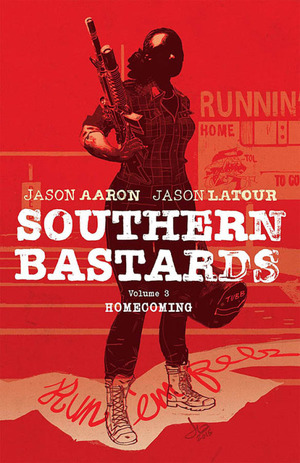 Jason Aaron - Jason Latour - Southern ​Bastards 3. - Homecoming
The ​Craw County Runnin’ Rebs are gearing up for the most important—and bloody—game of the year. Everyone in town has a stake in it. Six stories. Six bastards. One southern-fried crime series. Collects SOUTHERN BASTARDS #9-14 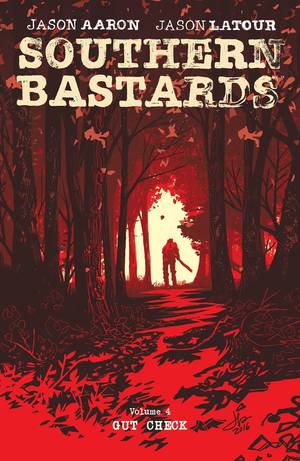 Jason Aaron - Jason Latour - Southern ​Bastards 4. - Gut Check
Coach ​Boss holds sway over Craw County for one reason: he wins football games. But after the biggest, ugliest loss of his career, the coach must become more of a criminal than ever before if he's gonna keep ahead of his enemies. Enemies like Roberta Tubb, who's come to town with a machine gun and some serious questions about how her daddy died. The 2015 Harvey Award-winning (Best New Series) and 2016 Eisner Award-winning (Best Continuing Series) southern-fried crime comic by JASON AARON & JASON LATOUR is back for another round of football, BBQ, and bloodshed! Collects SOUTHERN BASTARDS #15-20 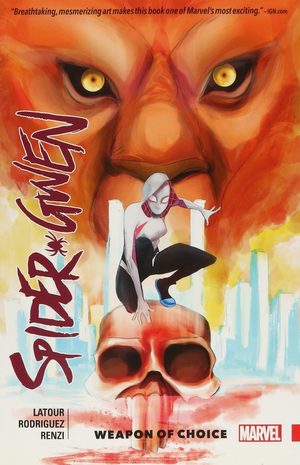 Jason Latour - Spider-Gwen ​2. - Weapon of Choice
Gwen's ​life is turned upside down after the SPIDER-WOMAN event at the worst time ever as Captain Frank Castle is bearing down on her. Does she stand a chance against Castle's punishment? SPIDER-GWEN 9-14 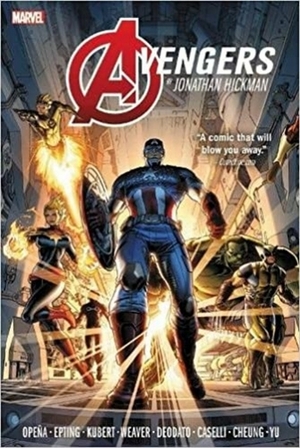 Jonathan Hickman - Nick Spencer - Jason Latour - Avengers ​by Jonathan Hickman 1.
Modern ​visionary Jonathan Hickman begins his Marvel magnum opus! As threats to Earth mount, the Avengers expand! And while Iron Man and Captain America assemble their Avengers World and strive to decipher the meaning of the White Event, Tony Stark secretly tries to solve the biggest crisis of all, along with his influential allies, the Illuminati! While they seek to prevent the collapse of reality itself, the Avengers face a war on two fronts! Protecting Earth from the Builders may only hand it to...Thanos! COLLECTING: AVENGERS (2012) 1-23, NEW AVENGERS (2013) 1-12, FREE COMIC BOOK DAY 2013: INFINITY 1, INFINITY 1-6, INFINITY: AGAINST THE TIDE INFINITE COMIC 1-2, ASTONISHING TALES: MOJOWORLD 1-6, MATERIAL FROM SHANG-CHI: MASTER OF KUNG FU (2009) 1