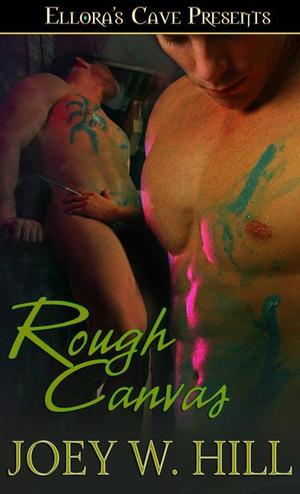 Joey W. Hill - Rough ​Canvas
When ​his father dies, Thomas is forced to abandon a burgeoning art career in New York. As difficult as it was to give up his lifelong dream, it's nothing next to walking away from the man he loves. Marcus taught him to embrace who he is, a sexual submissive who responds to the touch of only one Master. But why would the sophisticated Marcus need some farm kid from the South? Then Marcus shows up and offers him a way to continue his art career and help his family. There's only one hitch-he asks Thomas to spend a week with him in the Berkshires. Thomas knows he should refuse. But he's never been able to say no to his Master. 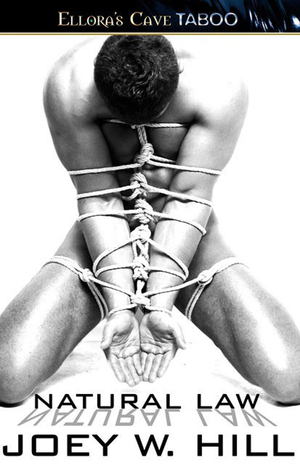 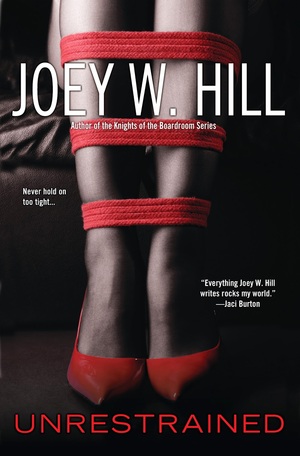 Joey W. Hill - Unrestrained
Athena ​is a widow and an accomplished businesswoman. She's the type of person who exceeds expectations in business, family--life in general. Since the death of her husband, she's had a desire to explore submissive cravings she's had for some time. The hitch is, Athena is known as a Mistress, because that's the role she played to her husband. Though she knew her submissive nature was strong enough to serve her husband as a Domme, because that's what he needed, it's when she meets Dale, a retired Navy SEAL, that she attempts to discover what her own submissive desires are. But letting go of that control is harder than she expected. Fortunately, Dale is an accomplished Master who can help her accept the true nature of her submission, rather than how she's tailored it to meet the expectations of others. But in the course of learning what letting go means, both of them will learn a bit more about the nature of love between Dominant and submissive, and how it defies all categories. 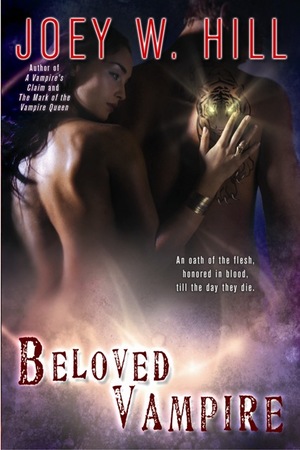 Joey W. Hill - Beloved ​Vampire
Fourth ​in the “darkly rich”(TwoLips Reviews) Vampire Queen series. Escaping the depraved servitude of a vampire master she killed, Jessica has found her way, with three nomadic guides, to the sun-baked desolation of the Sahara—only to slowly perish. Then she hears the tale of Farida, an enigmatic beauty lost as well to the Sahara three centuries ago, whose ancient desire for the legendary vampire Lord Mason is stirring the same desires in Jessica. But the more Jessica’s fatal curiosity reveals of Farida, the closer she gets to Lord Mason’s irresistible and forbidden secret. 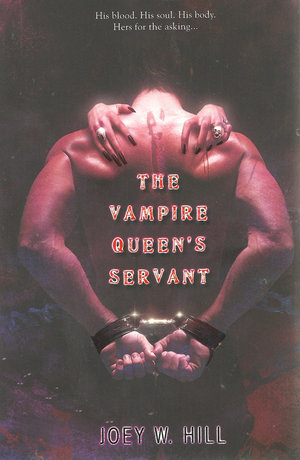 Joey W. Hill - The ​Vampire Queen's Servant
Paranormal ​erotica from an award-winning author who stands out in a genre known for its out-of-the-ordinary love play." (Romance Studio) Lady Elyssa Yamato Amaterasu Wentworth is a centuries-old vampire who's been given a new servant-Jacob, a total alpha male unaccustomed to submitting to any woman's wishes. What really binds Jacob to her are not her sensual midnight hungers, but something far more provocative. It stirs her blood, renews her life, and awakens her soul like only true love can. The passion between Elyssa and Jacob yields something else unexpected-a shared history that reaches back through the centuries and is fated to challenge their destiny like nothing ever will again. 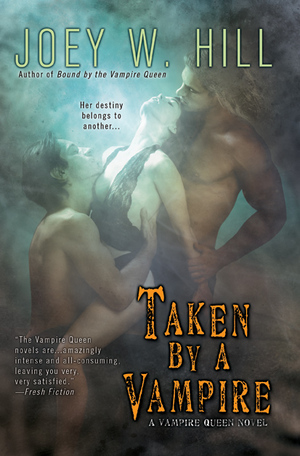 Joey W. Hill - Taken ​by a Vampire
Groomed ​from birth to be an Inherited Servant and serve only the most powerful vampire masters, Alanna never resented her destiny. Then she did the unthinkable: she betrayed her Master to the Vampire Council. Now death is her future, but until her Master is captured, she must be protected. The Vampire Council assigns her to Evan, a vampire whose wandering lifestyle makes him the perfect guardian… Alanna’s training was for a vampire of power and ambition, not for someone like Evan who lives in mountainside shacks and caves. Even his servant, Niall, is rough-mannered. But these two men are about to teach Alanna something her rigorous training never did. How to feel, how to desire…perhaps even how to love. Then the Council captures her Master, and Alanna has no choice but to accept her destiny. But Evan and Niall are no strangers to defying fate—and they will stop at nothing to make Alanna theirs forever… 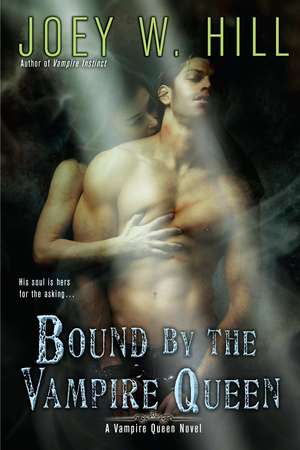 Joey W. Hill - Bound ​by the Vampire Queen
Sworn ​to obedience, compelled by loyalty, and threatened with damnation for betrayal, Jacob entered Lady Lyssa’s servitude as a human servant. Now he is a vampire, but still bound to Lyssa, who has found herself struggling with the capricious powers that have come alive in her paternal Fae blood—and challenged by two enemies… While the Vampire Council threatens to take away Lyssa and Jacob’s newborn son, the Fae Queen has ordered Lyssa to appear before the Otherworld court to face inescapable charges. The Fae have nothing but contempt for vampires, but to serve her, protect her, nourish her, and pleasure her, Jacob will follow his lady into hell itself. No one—neither Fae nor vampire--will compel him to break the oath he made to serve a vampire queen forever. 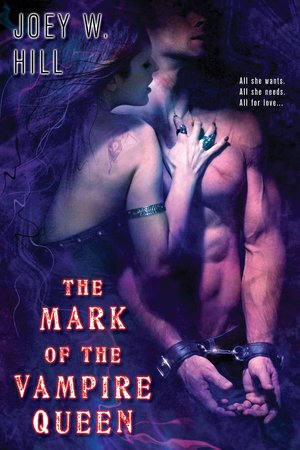 The ​Mark of the Vampire Queen Joey W. Hill
0

Joey W. Hill - The ​Mark of the Vampire Queen
Full ​servant. With his new title, Jacob must attend to Lady Lyssa's every need, venturing into a world of passion darker than he's ever known. As a vampire hunter he wasn't prepared to embrace a world where humans are sexual commodities, but he has adapted. Now he finds the integrity of his soul challenged as he serves his Mistress's needs as fully as he services her desires. He loves her, though other servants warn against giving her his soul. Everyone knows that Vampires have no regard for humans, so why would a Vampiress bother treating a mere sex toy with respect? But Jacob knows a human servant is far more than that. His Mistress needs a warrior, a friend and a lover. A man who will serve her in all ways, even if he has to betray the priceless treasure of her love. 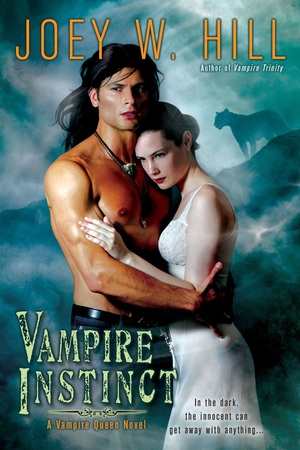 Joey W. Hill - Vampire ​Instinct
As ​servant to vampire mistress Lady Daniela, Elisa’s devotion is unwavering—until Lady D makes it clear that the children entrusted to Elisa’s care may be destroyed, if they cannot be integrated into the vampire world. Elisa’s young charges are vampires of such potent desires as to belie their youth, given to a reckless bloodlust that makes their assimilation nearly impossible. But Elisa has one desperate option. His name is Malachi, a Native American vampire who is a legend for his work with rehabilitating feline predators. With his primal understanding of the rules of survival, he is the fledglings’ last hope. But it is Elisa who is feeling the heat of his irresistible animal instincts. Now, as Malachi struggles to control the children’s impulses, he opens himself up to those of Elisa—and the passion they all share for the night could seal their fates forever. 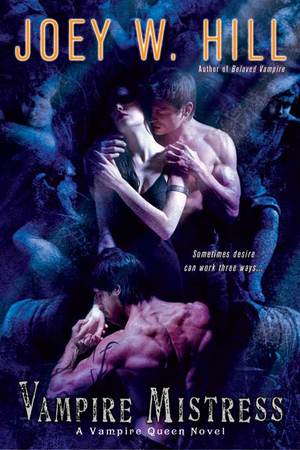 Joey W. Hill - Vampire ​Mistress
Sometimes ​desire works three ways... Gideon Green is a hardcore vampire hunter. But in the past year, his only family, his little brother, became a vampire queen’s servant – and then a vampire himself, giving Gideon a different view of the vampire world. Since Gideon’s sole purpose for over a decade has been killing vampires, the violence that has scarred his soul now haunts his conscience. Then he crosses paths with sexy BDSM night club owner, Mistress Anwyn. Their connection is immediate and intense, but she has a silent partner--the vampire Daegan Rei. When Anwyn is viciously attacked and turned by a rogue vampire, Gideon and Daegan join to protect her through a dangerous transition. As the bonds between the three of them draw tighter, Gideon faces an unbelievable truth...that the path to meaning in his life may be found in surrendering to the desires and needs of two vampires. 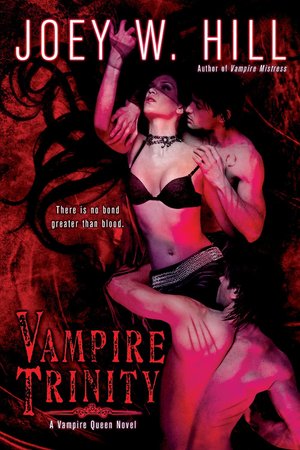 Joey W. Hill - Vampire ​Trinity
Vampire ​hunter Gideon Green sure as hell never intended to become a vampire’s servant. But when Anwyn Naime, a woman with whom he shared an unforgettable night, is turned by a vampire pack, they become bound by something far greater than either imagined. It also forces Gideon into an uneasy alliance with one of the most terrifying vampires he’s ever encountered: the mysterious Daegan Rei. Daegan also has a vested interest in Anwyn. His history with the lovely nightclub owner is both intimate and intense. As Gideon and Daegan shepherd Anwyn through her dangerous validation with the Vampire Council, it’s clear the three of them must learn to trust each other. But as boundaries between them erode and vulnerabilities surface, Gideon realizes he is no longer the man he thought he was--changed by a strange and unexpected bond with the two new people in his life he can’t survive without…vampires. 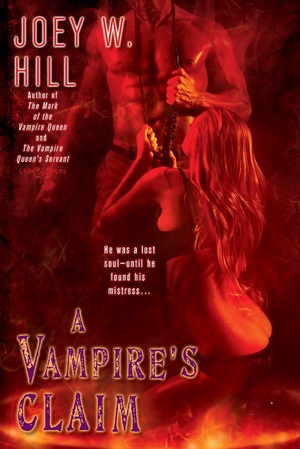 Joey W. Hill - A ​Vampire's Claim
Third ​in a national bestselling series that's been hailed as "erotica at its best."(A Romance Review) The daughter of two vampires, Lady Daniela is considered aristocracy in the vampire world. Still, she has to fight for what she wants-especially since what she wants is to depose a brutal territory overlord. For that she'll need the help of Devlin, a handsome, brave human who inflames her desire far more than any man or beast. Even though she could easily lay her claim and take Dev on as a fully marked servant, she resists the urge-especially since Dev is still tormented by something in his past. But when her enemy makes an unexpected appearance, Dev surprises them both by yielding completely to his feelings for Danny and showing her the devotion of a true servant-until she decides to take his freedom without asking...