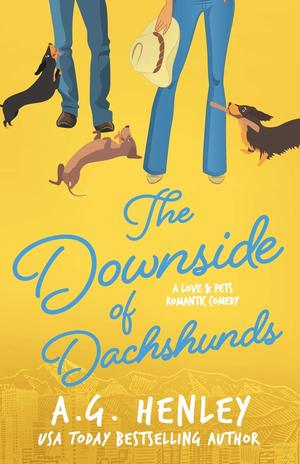 The ​Downside of Dachshunds A. G. Henley
0

A. G. Henley - The ​Downside of Dachshunds
After ​years of soul-sucking tech sales work, Isabel Costa and her best friend Adelaide Miller are chasing their dream of operating a successful dude ranch in the Colorado mountains. If only they knew what they were doing. To make the Lazy Dog Ranch profitable, Isa and Addie need a great head wrangler and a VIP guest to spread the good word. Tobias Coleman is an experienced wrangler and single dad who needs quality health care for his son. He takes the job at Lazy Dog despite disapproving of almost everything about the place, like the amateur owners and their three dippy dachshunds, the disco-obsessed head housekeeper, and the accident-prone kitchen staff. Not to mention the high and mighty guests. Isa equally dislikes cold and serious Tobias, but when an A-list actress visits the ranch, Isa and Tobias have to work together to make her stay a smashing success. When doxies and disco, Hollywood and horses collide, is there any room for love? 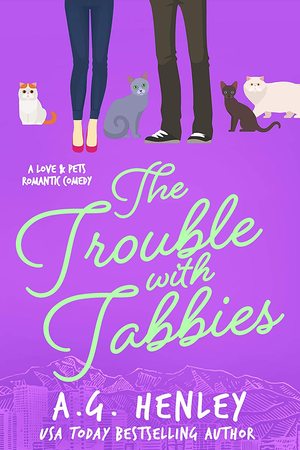 The ​Trouble with Tabbies A. G. Henley
0

A. G. Henley - The ​Trouble with Tabbies
The ​cats are here to stay. But is he? Beatrix Fuller’s income as a romance writer keeps her dozens of rescue cats in food and kitty litter, but she dreams of using a promised family inheritance to help build a state of the art cat adoption facility. To get the money, she has to present her fiancé to her father for approval at the family estate in Aspen, Colorado. The kink in this cat tale? The fiancé Bea’s told her family about for years is as fictional as the oh-so-perfect leading men in her books. She needs a fake fiancé fast, and she has two requirements: 1) must love cats and 2) no getting involved. Bea’s written romance long enough to know that false engagements lead to real relationships and she’s not interested. Although photographer Sebastian Ross spends every morning shooting in the gorgeous Colorado mountains, buyers aren’t exactly lined up to purchase his work. After Seb responds to Bea’s posting for a fake fiancé, they make a deal: pretend to be madly in love for the sake of her cats and his ridiculously high rent. But if they so much as kiss, Bea will give up her favorite fur baby and Seb will sell his beloved Canon. A foolproof plan . . . until something grows between these fools that looks a lot like love. 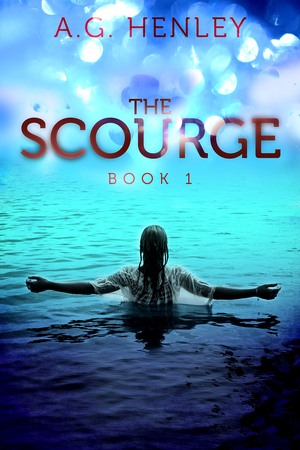 A. G. Henley - The ​Scourge
Seventeen-year-old ​Groundling, Fennel, is Sightless. She's never been able to see her lush forest home, but she knows its secrets. She knows how the shadows shift when she passes under a canopy of trees. She knows how to hide in the cool, damp caves when the Scourge comes. She knows how devious and arrogant the Groundlings' tree-dwelling neighbors, the Lofties, can be. And she's always known this day would come—the day she faces the Scourge alone. The Sightless, like Fenn, are mysteriously protected from the Scourge, the gruesome creatures roaming the forests, reeking of festering flesh and consuming anything—and anyone—living. A Sightless Groundling must brave the Scourge and bring fresh water to the people of the forest. Today, that task becomes Fenn's. Fenn will have a Lofty Keeper, Peree, as her companion. Everyone knows the Lofties wouldn’t hesitate to shoot an arrow through the back of an unsuspecting Groundling like Fenn, but Peree seems different. A boy with warm, rough hands who smells like summer, he is surprisingly kind and thoughtful. Although Fenn knows his people are treacherous, she finds herself wanting to trust him. As their forest community teeters on the brink of war, Fenn and Peree must learn to work together to survive the Scourge and ensure their people’s survival. But when Fenn uncovers a secret that shatters her truths, she’s forced to decide who and what to protect—her people, her growing love for Peree, or the elusive dream of lasting peace in the forest. 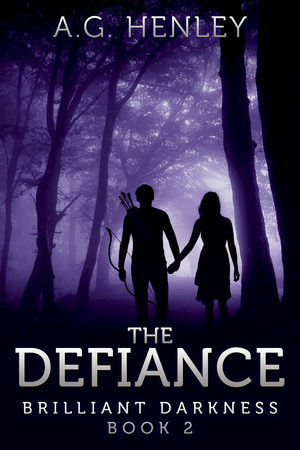 A. G. Henley - The ​Defiance
It ​hasn't been long since Fennel, a Sightless Groundling, and Peree, her Lofty Keeper, fell in love and learned the truth: the Scourge, and their world, are not what they seem. Fenn and Peree are determined to guide their people to the protected village of Koolkuna, but first they must convince them that everything they believe is a lie. An impossible task, especially when someone seems hell-bent on trying anything--even animal sacrifice and arson--to destroy the couple's new bond and crush the frail truce between the Groundlings and the Lofties. Not everyone wants to uproot their lives in the forest, and those who stay behind will be left terribly vulnerable. Fenn and Peree's resolve to be together, and the constant threat of the Scourge's return, push both groups to the breaking point. Unable to tell friend from foe, Fenn must again decide how much she's willing to sacrifice to ensure the future of the people of the forest. Only this time, the price of peace may be too high to bear. 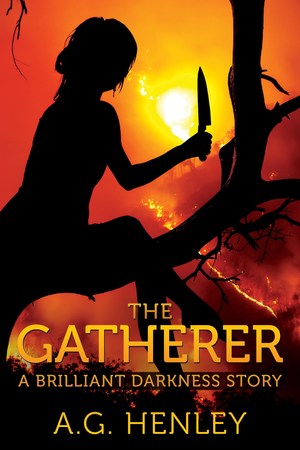 A. G. Henley - The ​Gatherer
Alev ​is proud to be a Fire Sister, one of a fierce group of women who live on their own terms in a flaming mountain compound called the Cloister. The Sisters live without men, so Alev must Gather young girls to replenish their numbers. When Alev plucks young Kaiya from the remote village of Koolkuna, the girl’s father follows them into the wilderness. Alev keeps him at bay, but she suspects that this man, at least, isn’t the monster she was taught all men are. After he arrives at the Cloister, the Sisters want to put him to death. Alev can look the other way, or she can heed the growing whispers of her heart to help Kaiya and her father escape. But to defy the Fire Sisters is to revoke the only life and family Alev has ever known—and to face certain death herself. 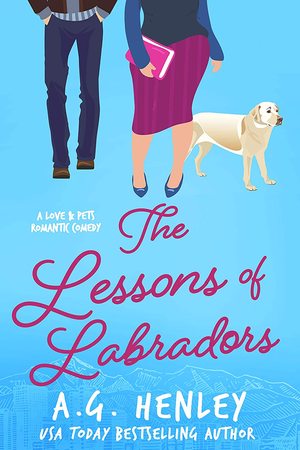 The ​Lessons of Labradors A. G. Henley
0

A. G. Henley - The ​Lessons of Labradors
Librarian ​Sarah Newsome can locate a reference book in less than three minutes, but three years may not be long enough to heal after the death of her Labrador retriever Sam. When Sarah joins a pet grief support group, she expects to find folks mourning their animals, like Sister Mary Margaret the Saint Bernard and Severus the snake, but she's shocked that her old college crush Ben is a member. Ben Becker's as surprised to be in a pet grief support group as he is to see Sarah there. She was the one who got away back in college, all because she was convinced he lied. And now? He really is telling a whopper, and it's way too late to admit it. As the weeks pass, Sarah increasingly relies on the comfort of the group and a renewed relationship with Ben, but there's no official handbook for healing. Will Severus' owner stop stockpiling frozen rodents for his slain serpent? Will Sister's owner abstain from crossing herself every time she mentions her dearly departed dog? And will Sarah risk her battered heart to give Ben another chance once she learns the hairy truth? 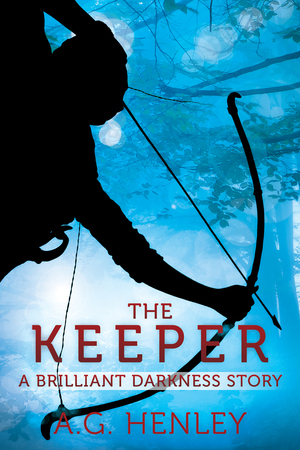 A. G. Henley - The ​Keeper
Peree ​knows what he’s doing as the new Keeper of the Water Bearer, Fennel. He knows Fennel’s Sightless. He knows that means the Scourge can’t hurt her while she gathers fresh water for her people. He knows how to wield his bow and arrow to take out the revolting flesh-eaters when they swarm around her. He’ll motivate her, distract her, do anything he can to keep her working. And most important, he'll make sure his people get every drop of their share of the water she collects. Peree knows his duty is to his people and his people alone, and not to the Water Bearer. What he doesn’t know is that he's falling in love with her. This companion story to The Scourge stands alone for new readers and allows series fans a glimpse of the first few days of Peree and Fenn's relationship from Peree's Lofty point of view. It includes a sneak peak of the first chapter of Book 2 in the Brilliant Darkness series. 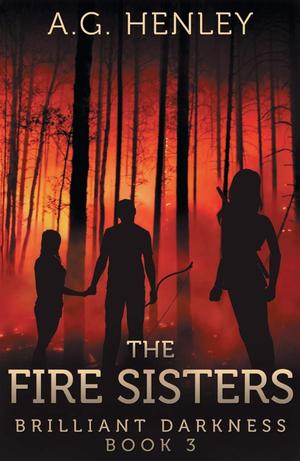 A. G. Henley - The ​Fire Sisters
Fennel ​and Peree are finally together and safe from the Scourge in the protected village of Koolkuna. But on the day of their partnering ceremony the children of the village are stolen away—Fenn’s loyal companion, Kora, among them. Fenn wants to bring the children home, especially as the villagers seem to blame Peree and her for the tragedy. Only since the death of her own family, she’s terrified a wrong move on her part will lead to the loss of others she loves. Fenn and Peree join a small search party led by rival Kaiya, the one person who stands a chance of finding the children thanks to her mysterious past. As they travel away from the safe waters of Koolkuna and into the Scourge-infested wilds, Fenn endures Kai’s scorn, her subtle designs on Peree, and the squabbling of the group. But nothing in her life so far has prepared her for the fierce warrior women who will steal others’ children to preserve their own existence—the Fire Sisters. If Fenn is to survive the threat of the Scourge, rescue the children from the Sisters, and have a hope of making a life with Peree in Koolkuna, she must face her fear of failure and loss and become the leader she’s destined to be. 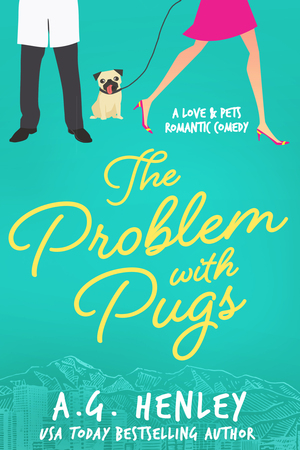 The ​Problem with Pugs A. G. Henley
0

A. G. Henley - The ​Problem with Pugs
Amelia’s ​boyfriend Tim broke up with her three months, thirteen days, and eleven hours ago, but at least he left her their baby, Doug the pug. Doug eats Amelia's underwear, mutilates furniture, and always poops in the middle of the sidewalk—but he only has eyes for her. When Amelia reluctantly wades back into the dating pool, meets a new guy, and has to pay his medical bill after Doug launches a sneak attack on him, she realizes she has a problem. She’s determined to do everything she can to help her dog adjust to life without Tim, even recruiting handsome Travis, Doug’s new veterinarian, who’s willing to assist her at risk of life and limb. But it won’t be so easy. Doug’s the only man in Amelia’s life now . . . and he isn’t about to share. 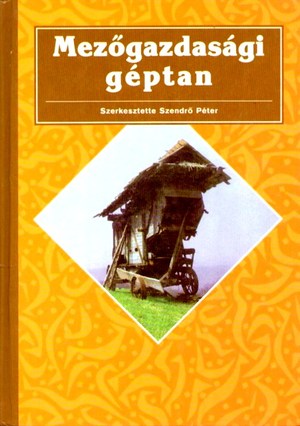