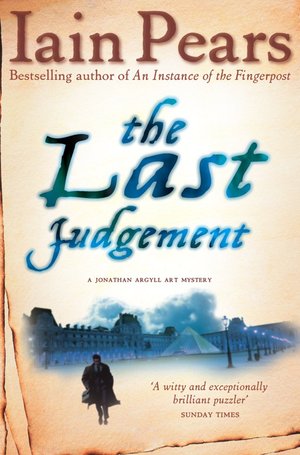 Iain Pears - The ​Last Judgement
Paris ​can do strange things to a man's mind - like making him agree to an apparently harmless favour of escorting a picture to Rome. 'The Death of Socrates' is a particularly nondescript piece, so art dealer Jonathan Argyll can sympathize when its recipient refuses to accept delivery. But in an unusual twist, the same man is found dead a few hours later. Surely the painting wasn't that bad? Now caught up in a murder investigation, Jonathan recalls an attempt to steal the artwork while he was at the train station. Could this be the killer? The bodies start piling up and Jonathan must uncover the dark wartime secret at the heart of the mystery - before someone puts him out of the picture for good. 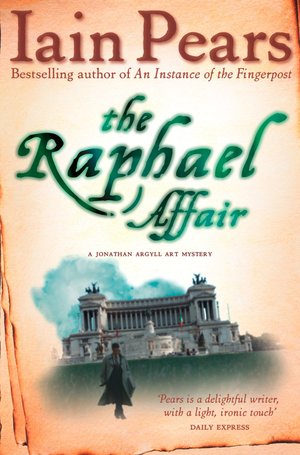 Iain Pears - The ​Raphael Affair
First ​in the Italian art-history crime series featuring English dealer and sleuth Jonathan Argyll, from the author of the best-selling masterpiece _An Instance of the Fingerpost._ Flavia di Stefano is the kind of Italian beauty that art dealer Jonathon Argyll doesn't normally get to meet in his line of work. But, it turns out, all he had to do was get caught breaking into one of Rome's churches - for Flavia is the Art Theft officer tasked with interviewing Jonathon. A strange way to meet, perhaps, but then Jonathon has an even stranger tale to tell. His claim that the church contains a lost classic, hidden under another painting, is treated with cautious scepticism. But when the picture first vanishes, then turns up in the hands of a British art dealer claiming it's a newly discovered Raphael, it's clear there's more to it than meets the eye. When vandalism is followed by murder, it's up to Jonathan and Flavia to discover just how much more - a quest for the true nature of a painting with a lethal history! 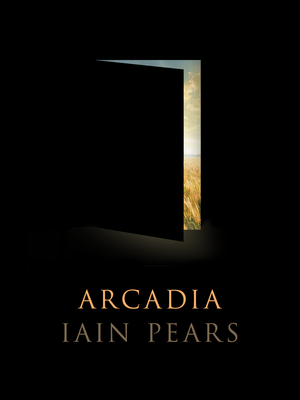 Iain Pears - Arcadia
Henry ​Lytten - a spy turned academic and writer - sits at his desk in Oxford in 1962, dreaming of other worlds. He embarks on the story of Jay, an eleven-year-old boy who has grown up within the embrace of his family in a rural, peaceful world - a kind of Arcadia. But when a supernatural vision causes Jay to question the rules of his world, he is launched on a life-changing journey. Lytten also imagines a different society, highly regulated and dominated by technology, which is trying to master the science of time travel. Meanwhile - in the real world - one of Lytten's former intelligence colleagues tracks him down for one last assignment. As he and his characters struggle with questions of free will, love, duty and the power of the imagination, Lytten discovers he is not sure how he wants his stories to end, nor even who is imaginary... 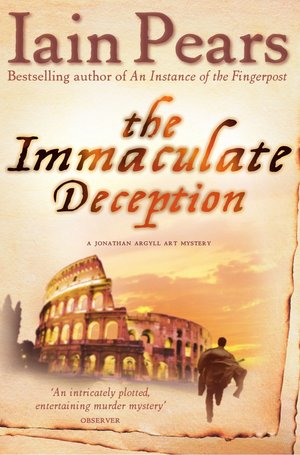 Iain Pears - The ​Immaculate Deception
How ​do you resolve a scandalous kidnapping without paying the ransom or attracting any attention? It's not a question Flavia di Stefano, acting head of the Italian Art Theft Squad, would normally need to answer. Unfortunately, the Italian prime minister is asking it. As Flavia begins a desperate search for the Claude Lorrain landscape, snatched while on loan from the Louvre, her husband embarks on a rather more leisurely quest. Jonathan Argyll is keen to discover the provenance of a small Renaissance painting, titled The Immaculate Conception, as a favour to its owner. His enthusiasm wanes when the investigation brings him into unexpected danger. There's no turning back, though, and soon husband and wife are uncovering shocking secrets that will bring them into the path of some very dangerous enemies indeed! 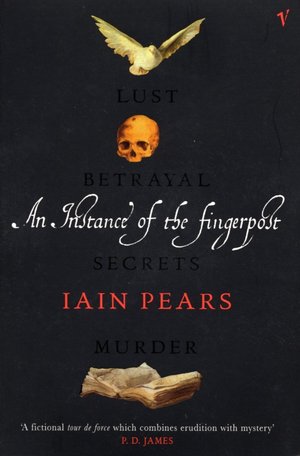 An ​Instance of the Fingerpost Iain Pears
2

Iain Pears - An ​Instance of the Fingerpost
_An ​Instance of the Fingerpost_ is that rarest of all possible literary beasts - a mystery powered as much by ideas as by suspects, autopsies, and smoking guns. Hefty, intricately plotted, and intellectually ambitious, _Fingerpost_ has drawn the inevitable comparisons to Umberto Eco's _The Name of the Rose_ and, for once, the comparison is apt. The year is 1663, and the setting is Oxford, England, during the height of Restoration political intrigue. When Dr. Robert Grove is found dead in his Oxford room, hands clenched and face frozen in a rictus of pain, all the signs point to poison. Rashomon-like, the narrative circles around Grove's murder as four different characters give their version of events: Marco da Cola, a visiting Italian physician - or so he would like the reader to believe; Jack Prestcott, the son of a traitor who fled the country to avoid execution; Dr. John Wallis, a mathematician and cryptographer with a predilection for conspiracy theories; and Anthony Wood, a mild-mannered Oxford antiquarian whose tale proves to be the book's "instance of the fingerpost". (The quote comes from the philosopher Bacon, who, while asserting that all evidence is ultimately fallible, allows for "one instance of a fingerpost that points in one direction only, and allows of no other possibility".) Like _The Name of the Rose,_ this is one whodunit in which the principal mystery is the nature of truth itself. Along the way, Pears displays a keen eye for period details as diverse as the early days of medicine, the convoluted politics of the English Civil War, and the newfangled fashion for wigs. Yet Pears never loses sight of his characters, who manage to be both utterly authentic denizens of the 17th century and utterly authentic human beings. As a mystery, _An Instance of the Fingerpost_ is entertainment of the most intelligent sort; as a novel of ideas, it proves equally satisfying.

Iain Pears - The ​Portrait
This ​is a dark and disturbing novel of suspense, set at the turn of the 20th century, by the bestselling author of _An Instance of the Fingerpost._ The windswept isle of Houat, off the coast of Brittany, is no picturesque artists' colony. At the turn of the twentieth century, life is harsh and rustic. So why did Henry MacAlpine forsake London - where he had been feted by critics and gallery owners, his works exhibited alongside the likes of Cezanne and Van Gogh - to make his home in this remote outpost? The truth begins to emerge when, four years into his exile, MacAlpine receives his first visitor. Influential art critic William Naysmith has come to the island to sit for a portrait. Over the course of the sitting, the power balance between the two men shifts dramatically as the critic whose pen could anoint or destroy careers becomes a passive subject. And as the painter struggles to capture Nasmith's true character on canvas, a story unfolds... _The Portrait_ is a darkly atmospheric, psychologically complex, macabre and chilling novel from a master storyteller. 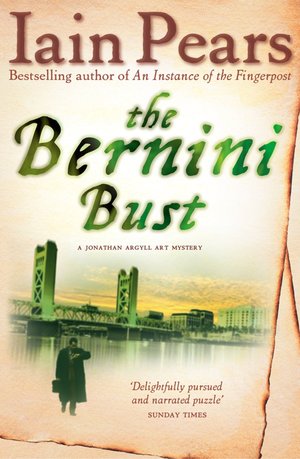 Iain Pears - The ​Bernini Bust
British ​art historian Jonathan Argyll has just sold a minor Titian to an American museum for a highly inflated price. But as he complacently awaits his cheque in the Californian sunshine, trouble erupts: the museum's billionaire owner is murdered, a dubious art dealer disappears, and a Bernini bust, apparently smuggled out of Italy, is missing. Things could hardly be worse, and the situation calls for assistance from his friends General Bottando and Flavia di Stefano of the Italian National Art Theft Squad, especially as things do get worse - the killer's attention turns to Jonathan himself. Cleverly mixing murder with art, _The Bernini Bust_ is a witty and intriguing mystery from the bestselling author of _An Instance of the Fingerpost._ 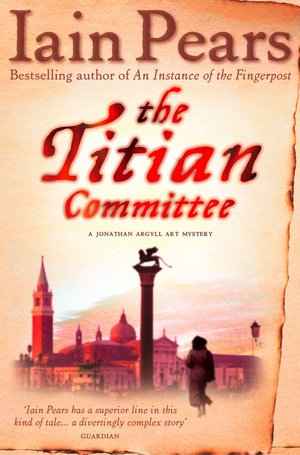 Iain Pears - The ​Titian Committee
By ​the author of the acclaimed bestseller, _An Instance of the Fingerpost._ When Louise Masterson, a member of the famous Titian Committee, is found stabbed to death in a Venetian public garden, General Bottando of Rome's Art Theft Squad sends Flavia di Stefano to Venice to assist the local carabinieri. But it seems they don't want her help or expertise, and are convinced a Sicilian mugger is responsible for the killing. Flavia has other ideas and calls upon the services of English art historian Jonathan Argyll, who is in Venice to buy a picture from the Marchesa di Mulino's collection. When another member of the committee is found dead and the Marchesa's collection is stolen, Flavia and Argyll follow a tortuous trail to unearth the truth behind both the killings and the theft. In the process, not only do they stumble across another murder, but come close to unravelling a mystery from Titian's own life. 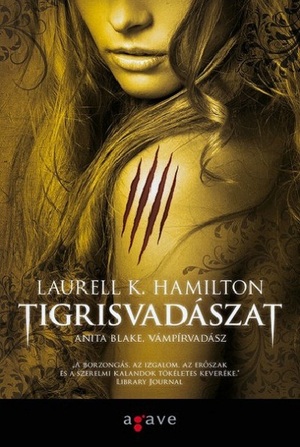