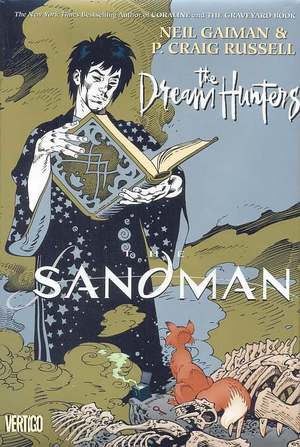 Neil Gaiman - P. Craig Russell - Sandman: the Dream Hunters
A humble young monk and a magical, shape-changing fox find themselves romantically drawn together. As their love blooms, the fox learns of a devilish plot by a group of demons and a Japanese emperor to steal the monk's life. With the aid of Morpheus, the fox must use all of her cunning and creative thinking to foil this evil scheme and save the man that she loves. A beautiful little tale. Neil Gaiman - Sandman ​Overture 4.
In ​an asylum in the City of the Stars, Morpheus comes face to face with the creature at the center of the war that will destroy the universe. Time is running out... Neil Gaiman - Sandman ​Overture 1.
Twenty-five ​years since THE SANDMAN changed the landscape of modern comics, Neil Gaiman’s legendary series is back! THE SANDMAN: OVERTURE heralds New York Times best-selling writer Neil Gaiman’s return to the art form that made him famous, ably abetted by artistic luminary JH Williams III (BATWOMAN, PROMETHEA), whose lush, widescreen images provide an epic scope to The Sandman’s origin story. From the birth of a galaxy to the moment that Morpheus is captured, THE SANDMAN: OVERTURE will feature cameo appearances by fan-favorite characters such as The Corinthian, Merv Pumpkinhead and, of course, the Dream King’s siblings: Death, Desire, Despair, Delirium, Destruction and Destiny. “People have often asked me what happened to Morpheus to make it possible for him to be captured in THE SANDMAN #1,” Gaiman said. “And now they get to find out. And finding out, they get to learn secrets of the Endless that I’ve kept to myself for 25 years. Family secrets. And I should warn you: one of the Endless dies on page five.” 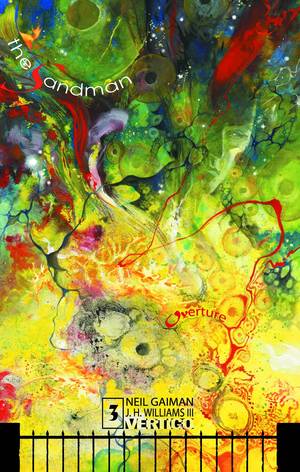 Neil Gaiman - Sandman ​Overture 3.
The ​armies of the night are gathering. The universe is beginning its final dance. Morpheus, far from home, walks the path of madness, accompanied only by himself. 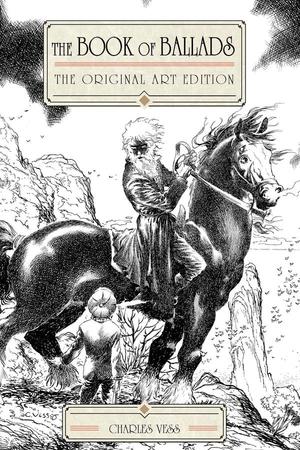 Neil Gaiman - Charles Vess' Book Of Ballads: Art Edition Vol.1
Sharyn McCrumb (The Ballad of Frankie Silver), Jeff Smith (Bone), and more. Charles Vess is one of the most acclaimed and beloved artists in the fields of comic books and book illustration Features renowned New York Times best-selling and award-winning science fiction and fantasy writers including Neil Gaiman, Charles de Lint, Sharyn McCrumb, and Jane Yolen. Featuring breathtaking and award-winning artwork The original artwork is stored in the United States Library of Congress, who have granted Titan Books special permission to access it for publication. The Book of Ballads is the winner of the Eisner Award. Charles Vess has won the Inkpot Award, and the World Fantasy Award for “Best Artist.” This limited edition oversized deluxe hardback collection includes an illustrated tip-in sheet signed by Charles Vess. 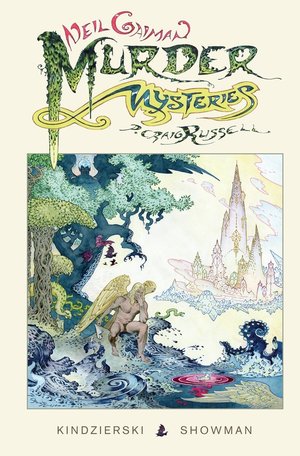 Neil Gaiman - P. Craig Russell - Murder ​Mysteries
Neil ​Gaiman and P. Craig Russell venture into the world of myth and angels in this new edition of their noir-fantasy tale. Constructing and maintaining all of heaven and earth is an immense task, which God has divided up amongst the various ranks and stations of angels. As with any huge effort, there are bound to be casualties. Lights is shed on the lords behind creation as one lonely man in Los Angeles hears the story of one particular unspeakable crime: a murder in Paradise. 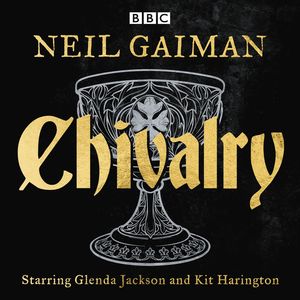 Neil Gaiman - Chivalry
Mrs ​Whitaker just wants to have a chat with her dear friend Mrs Greenberg over home-made macaroons. But her charity shop find soon makes her the focal point of a most important quest when a handsome young man - who says he’s called Galaad - comes asking for the Grail. This sound designed, multi-voiced reading is an extended cut, including material not heard in the radio broadcast, and is introduced by an exclusive interview with Neil Gaiman. 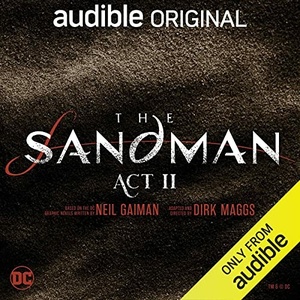 Neil Gaiman - Dirk Maggs - The ​Sandman Act II
Enter ​the Dreaming again as the blockbuster audio adaptation of “the greatest epic in the history of comic books” continues in The Sandman: Act II. James McAvoy returns to voice Morpheus, the Lord of Dreams, in this sequel to the #1 New York Times audio best-seller. Journey into a world of myths, imagination, and terror based on the best-selling DC comic books and graphic novels written by Neil Gaiman (returning as the Narrator), and lose yourself in another groundbreaking, immersive drama adapted and directed by the award-winning audio master Dirk Maggs. In the absolutely packed Act II, the dark fantasy resumes and the Sandman expands into the French Revolution, Ancient Rome, 19th-Century San Francisco, 8th-century Baghdad, and beyond. New and familiar characters abound, voiced by a bright mix of performers, including Kat Dennings, Regé-Jean Page, Emma Corrin, Michael Sheen, Kristen Schaal, Brian Cox, John Lithgow, Jeffrey Wright, and so many more, including fan-favorite narrators Simon Vance and Ray Porter. Just close your eyes and listen again as the greatest epic continues. Act II of the audio series The Sandman adapts collected volumes 4 (Season of Mists) and 5 (A Game of You) of the comics in their entirety, and most of volume 6 (Fables & Reflections). 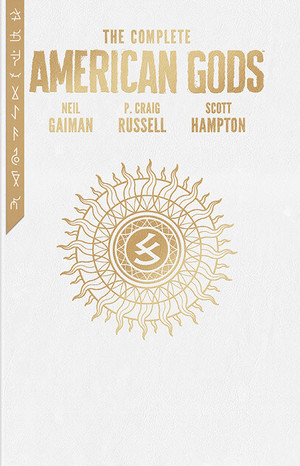 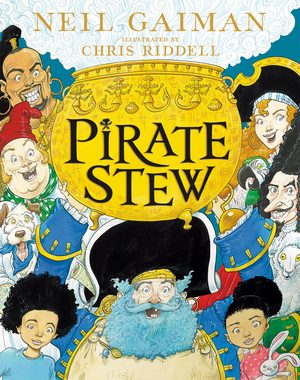 Neil Gaiman - Pirate ​Stew
Meet ​LONG JOHN McRON, SHIP'S COOK . . . and the most unusual babysitter you've ever seen. Long John has a whole crew of wild pirates in tow, and - for one boy and his sister - he's about to transform a perfectly ordinary evening into a riotous adventure beneath a pirate moon. It's time to make some PIRATE STEW. Pirate Stew! Pirate Stew! Pirate Stew for me and you! Pirate Stew, Pirate Stew Eat it and you won't be blue You can be a pirate too! Marvellously silly and gloriously entertaining, this tale of pirates, flying ships, doughnut feasts and some rather magical stew is perfect for all pirates, both young and old. With a deliciously rhyming text from master storyteller Neil Gaiman, and spellbinding illustrations by the supremely talented Chris Riddell, three-times-winner of the Kate Greenaway Medal, this is the picture book of the year! Joyful, quirky and action-packed, it makes a spectacular and magical gift. Dan Watters - Neil Gaiman - Lucifer ​- The Infernal Comedy
The ​Prince of Darkness is missing, and from the look of things he's not coming back. Blind, crippled, and without a penny to his name, the onetime ruler of Hell is now a wizened, unkempt old man trapped in a small town where sinister forces torment him at every turn and nothing is as it seems. He has no memory of how he got here, no hope of escape, and no way to track down his child--the only entity capable of preventing the end of the world. At the same time, a police officer in Lucifer's adopted hometown of Los Angeles is about to lose everything he holds dear. Desperate to find a reason for his suffering, Detective John Decker is drawn into a shadowy conspiracy whose widely varied members share a single common purpose: to kill Lucifer Morningstar. With monsters and magicians from every plane of reality set against him, can the Lightbringer heal his broken mind and body and regain his wrongful place in the cosmos? Acclaimed author Dan Watters (The Shadow, Deep Roots) and the incredible art team of Max and Sebastian Fiumara (All-Star Batman, The Amazing Spider-Man, Abe Sapien) begin an all-new chapter in the saga of one of the Sandman Universe's most mesmerizing characters in Lucifer Vol. 1: The Infernal Comedy--from the mind of New York Times best-selling author Neil Gaiman! 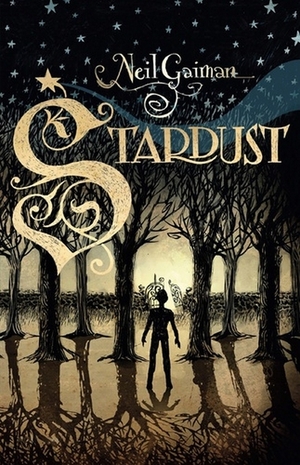 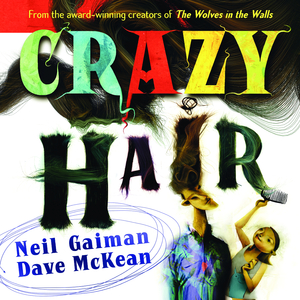 Neil Gaiman - Dirk Maggs - The ​Sandman
Torn ​from his realm, The Sandman - Morpheus, the immortal king of dreams, stories and the imagination – was imprisoned on earth for decades. On escaping he must restore his power, descend into hell to face Lucifer, chase rogue nightmares, visit a serial killer convention and cross paths with characters from DC comic books, ancient myths, and real-world history. Audible and DC present the first in a series of audio adaptations of Neil Gaiman’s best-selling graphic novels, adapted and directed by multi-award-winner Dirk Maggs, performed by an ensemble cast with James McAvoy (X-Men; It) in the title role, and accompanied by an original score by James Hannigan. As narrator, Neil Gaiman will lead you through this dark, literary world in a twisting fantasy journey of myth, imagination and terror. 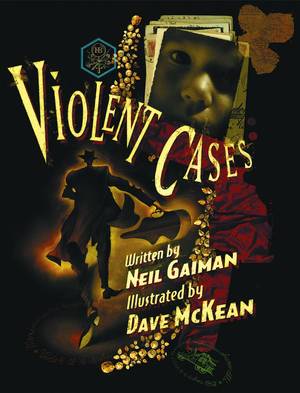 Neil Gaiman - Violent ​Cases
Violent ​Cases marks the beginning of many astonishing and award-winning collaborations between author Neil Gaiman and artist Dave McKean. It is now offered in a hardcover format with an expanded art section and introductions by Alan Moore, Paul Gravett, and Neil Gaiman! A narrator remembers his childhood encounters with an old osteopath who claims to have treated Al Capone. Gradually, the England of the 1960s and the Chicago of the 1920s begin to merge into a beautifully drawn and hauntingly written tale of memory and evil. 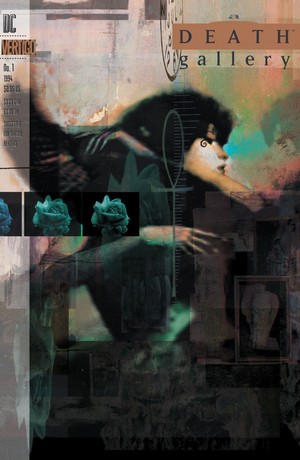 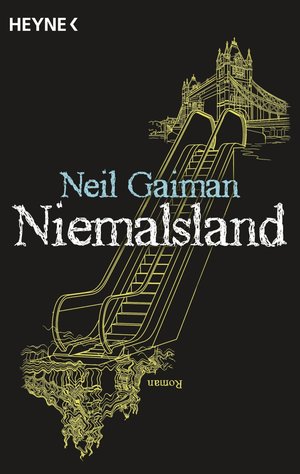 Neil Gaiman - Troll ​Bridge
Young ​Jack's world was full of ghosts and ghouls, but one monster-a ravenous and hideous troll-would haunt him long into manhood. As the beast sups upon a lifetime of Jack's fear and regret, Jack must find the courage within himself to face the fiend once and for all! Neil Gaiman - Cinnamon
A ​talking tiger is the only one who may be able to get a princess to speak in this beautiful picture book set in a mythic India by Newbery Medal-winning and New York Times bestselling author Neil Gaiman, illustrated in bold colors by Divya Srinivasan. Previously available only as an audio book, Cinnamon has never been published in print before, and Divya Srinivasan’s lush artwork brings Neil Gaiman’s text to life. 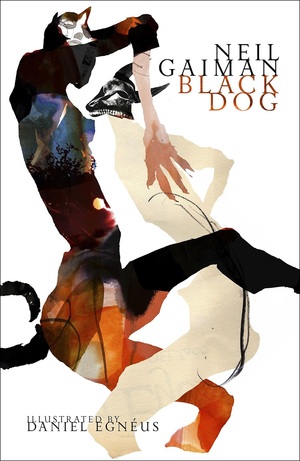 Neil Gaiman - Black ​Dog
'It ​followed me home,' he said, conversationally. In a rural northern village, legend tells of a ghostly black dog that appears from the darkness before you die. Shadow Moon has been on the road a while now but he can't walk any further tonight, not with the rain lashing down. Gratefully, he heads home with a nice English couple, who offer a box room, hot whisky and local tales. But when the man collapses en route, Shadow realises that something about this place has been left untold. Something ancient, something within the very walls of the village. Something shadowing them all. 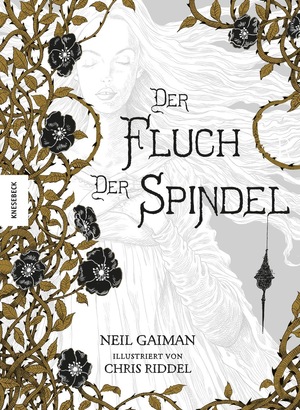 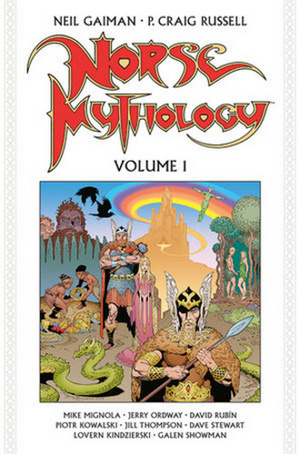 Neil Gaiman - P. Craig Russell - Norse ​Mythology 1.
#1 _New ​York Times bestselling author Neil Gaiman and Eisner Award-winning comics legend P. Craig Russell breathe new life into the ancient Norse stories in this comic-book adaptation of the hit novel Norse Mythology._ Gaiman and Russell team with a legendary collection of artists to take readers through a series of Norse myths, including the creation of the Nine Worlds, the loss of Odin's eye and source of his knowledge, the crafting of Thor's hammer and the gods' most valuable treasures, the origin of poetry, and Loki's part in the end of all things--Ragnarök. Collects _Norse Mythology_ #1-6, featuring art by P. Craig Russell, Mike Mignola, Jerry Ordway, David Rubín, Piotr Kowalski, and Jill Thompson in a beautiful hardcover volume with a dust jacket. 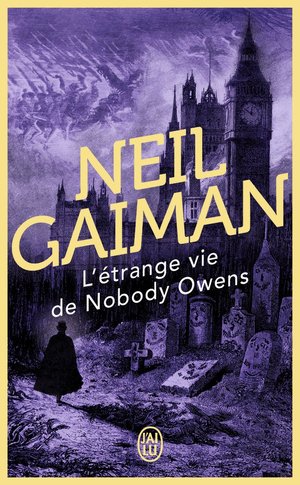