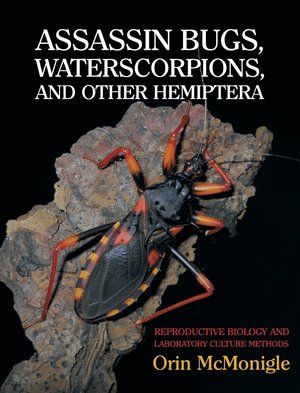 Orin McMonigle - Assassin Bugs, Waterscorpions, and Other Hemiptera
Although names like assassin bug and waterscorpion are composed of familiar words, the actual animals they describe are not readily visualized by the general public. These unique creatures are members of a stunning and diverse group of nymphal insects known as true bugs. Giant water bugs can be as large as a man's hand, big enough to readily dispatch fish, snakes, and small turtles in the wild. Large assassin bugs kill and eat massive armored beetles that the world's largest scorpion, tarantula, or centipede would run from. Beautiful metallic shield bugs band together to take down prey a thousand times their mass without the use of venom or jaws. Others species hunt on the open ocean or feed on plants, reserving their spines and vicious attacks for battle over mates. Despite such endearing qualities of this widespread and common group, the only impressive aspect of true bug literature is its intense insufficiency. Even common laboratory species generate little writing. This book is the first and foremost attempt to provide a large format presentation on the biology of true bugs, represented in direct observations and repeatable husbandry guidelines for the largest and most formidable species. A full-color, pictorial essay accompanies this detailed text, highlighting the variety and design of this breathtaking group of insects.

Orin McMonigle - Millipeds ​in Captivity
Orin ​McMonigle, with contributions by the late Dr. Richard L. Hoffman, assembles the definitive resource guide with reproductive and developmental data for those spectacular terrestrial arthropods, the millipeds (or millipedes). Invertebrate hobbyists can successfully culture a number of colorful and gigantic diplopods by following specific methodologies outlined in this book. From the world's largest African giant millipeds to the most astoundingly colorful members of the Orders Polydesmida and Spirobolida, there are plenty of species to attract the beginning enthusiast or to challenge the advanced keeper. 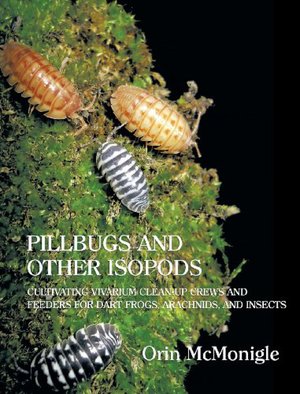 Pillbugs ​and Other Isopods Orin McMonigle
1

Orin McMonigle - Pillbugs ​and Other Isopods
The ​pillbug and its relatives are beloved the world over by children-in this text they get their due for adults. Spectacular cultivars and amazing species represent an often forgotten group of backyard arthropods. In recent years the beautiful peach pillbug, zebra armadillo-bug, and Dalmatian isopod, among others, have burst on the scene in a growing hobby. Their use as feeders for herps and invertebrates combined with spectacular clean-up crew attributes for terrariums and paludariums may be the main assets of the isopod, but after learning about these spectacular beauties, their simple husbandry, and historical cultivation, the child inside may fall in love again.

Steven Barney - Orin McMonigle - The ​Complete Guide to Rearing the Rainbow Scarab and Other Dung Beetles
This ​guide to dung beetle husbandry is the sixth in the complete guide to rearing beetles series. The text covers background, captive husbandry, trapping and collecting, food and bait, other dung beetle species, and behavior with concentration on the beautiful Phanaeus vindex (Coleoptera: Scarabaeidae, Scarabaeinae). 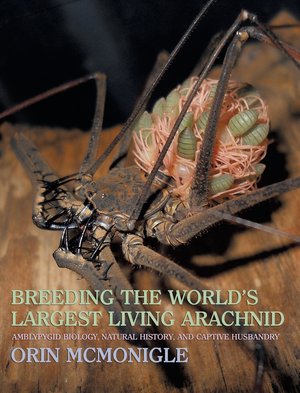 Orin McMonigle - Breeding ​the World's Largest Living Arachnid
What ​arachnologist worth his salt could forget the arachnid with a two-foot legspan? The Order Amblypygi not only contains world record species, but also some of the most improbable and unbelievable looking members of the Class Arachnida. Otherwise known as whipspiders, these creatures appear to have been formed in the deep recesses of a human nightmare, and yet are the only large arachnids that are entirely harmless to humans. Predatory whipspiders display advanced social behaviors and externally visible reproductive biology of immense complexity. This text presents cutting edge biological details, supporting Scanning Electron Micrographs, and unparalleled captive reproduction information with photographic documentation. 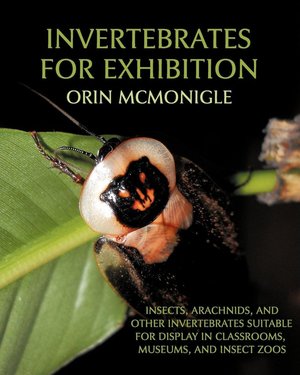 Orin McMonigle - Invertebrates ​For Exhibition
There ​are a wide range of insects, arachnids, and other invertebrate species that can be maintained and exhibited alive for the public or small groups. Orin McMonigle has displayed numerous invertebrates since the early '90s, and offers a wealth of experience and practical advice in this book for those who would like to incorporate these spineless wonders into their displays. Husbandry, display, and breeding advice is accompanied by numerous full color images of these species in various stages of their life cycles. This is a fascinating book for teachers, small museums, or even the casual pet lover who would like to add some interesting inverts to their collection.