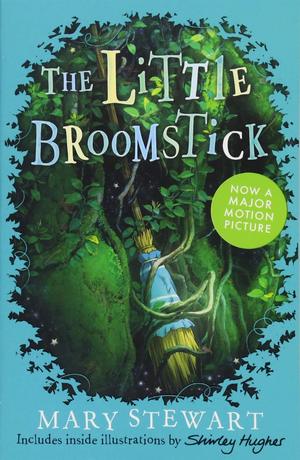 Mary Stewart - The ​Little Broomstick
A ​black cat that needs to rescue its brother from a witch's spell enlists the help of a lonely ten-year-old Mary Smith. It is Tib the black cat who leads Mary to the strange flower in the woods. When she discovers a little broomstick shortly afterwards, she is astonished to feel it jump in to action. Before she can gather her wits, it is whisking her over the treetops, above the clouds, and in to the grounds of Endor College, where: 'All Examinations Coached for by A Competent Staff of Fully-Qualified Witches.' Here she discovers evidence of a terrible experiment in transformation - deformed and mutant animals imprisoned in cages. In the moment after her broomstick takes off, she realises that Tib has been captured. Returning to the College the following day, she manages to free the animals, but not before the Head of the college, Miss Mumblechook, and her colleague, Doctor Dee, have seen her. Mary manages to flee... but the evil pair are in hot pursuit! 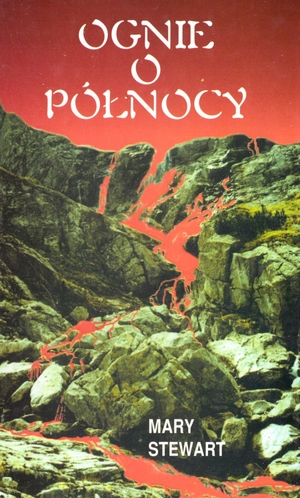 Mary Stewart - The ​Moonspinners (Oxford Bookworms)
When ​Nicola arrives in Crete a day early, she gets more than just an extra day of holiday. She comes to a village where no one can be trusted, and she becomes involved in a murder mystery that puts her own life in danger. This story is set in a small village in the mountains of Crete. This is an island where people have strong feelings, where arguments begin suddenly, and end quickly. And Nicola has arrived in the middle of an argument that could end very quickly - with a gun. 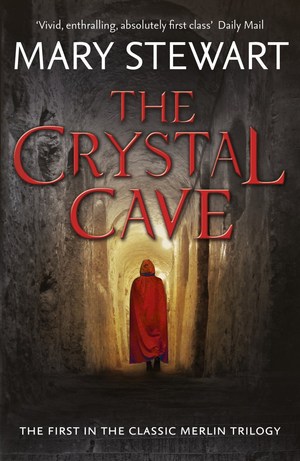 Mary Stewart - The ​Crystal Cave
The ​Crystal Cave plunges the reader deep into Fifth Century Britain, a country in chaos and division after the Roman withdrawal, where minor kings plot and intrigue against each other in draughty fog-bound settlements. This is Merlin’s world. The illegitimate son of a South Wales princess, his young life precariously in balance as the shifting tide of events wash over his homeland, he is aware at the earliest age of a great natural gift – the Sight. Against a background of invasion and imprisonment, wars and conquest, we see his emergence into manhood equipped with learning and wisdom far in advance of his years and his time (which some call magic), and his dramatic role in the New Beginning – the coming of Arthur. 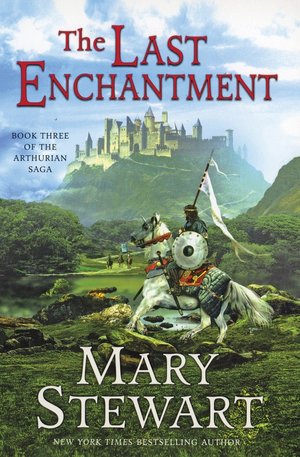 Mary Stewart - The ​Last Enchantment
Arthur ​Pendragon is King! Unchallenged on the battlefield, he melds the country together in a time of promise. But sinister powers plot to destroy Camelot, and when the witch-queen Morgause -- Arthur's own half sister -- ensnares him in an incestuous liaison, a fatal web of love, betrayal, and bloody vengeance is woven. 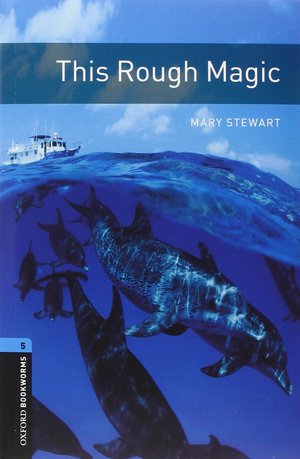 Mary Stewart - This ​Rough Magic (Oxford Bookworms)
The ​Greek island of Corfu lies like a jewel, green and gold, in the Ionian sea, where dolphins swim in the sparkling blue water. What better place for an out-of-work actress to relax for a few weeks? But the island is full of danger and mysteries, and Lucy Waring's holiday is far from peaceful. She meets a rude young man, who seems to have something to hide. Then there is a death by drowning, and then another . . . 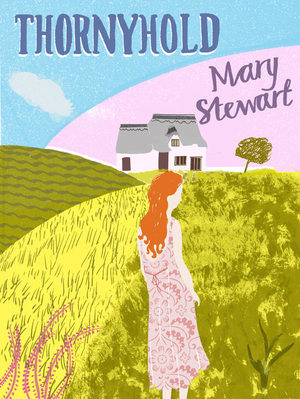 Mary Stewart - Thornyhold
To ​Gilly Ramsey, during her lonely childhood, the occasional brief visits of her mother's cousin Geillis were a delight, appearing to the unhappy child like the visits of a fairy godmother. Years later, when Cousin Geillis was dead, and had willed her house, Thornyhold, to Gilly, the latter discovered that "fairy godmother" was indeed apt. For Cousin Geillis, with her still-room, and her herbalist's practice--and her undoubted powers--had long been known to the locals as a witch. And Gilly, inheriting "the witch's house," inherits, too, in spite of herself, her cousin's reputations. She is approached by neighbours, some innocent, some not so innocent, but all assuming that she, too, is a witch, and a possible addition to the local coven. There is some truth in this, for Gilly, to her own surprise and discomfort, finds that in difficult moments she can call on a kind of power; it is as if Cousin Geillis is still somewhere in house and garden, weaving her own spells. Gilly, once so shy and insecure, is gradually forced, by the very real powers at work in Thornyhold, to choose her own path through the enchanted woods. This she finally does, with the aid of an engaging small boy with a sick ferret, and then of his father. Thornyhold, with its magical strength and peace, and its sovereign defenses against evil, puts an end to loneliness and insecurity, and allows Gilly to mve forward with confidence toward a new and satisfying life. Mary Stewart has written a twentieth-century love story, delicate in its perception of a young woman's falling in love, delightful in its portrayal of the English countryside, and skilled in its creation of a world where the magic casements open upon peril, but also upon hope and happness. —jacket, William Morrow, 1988 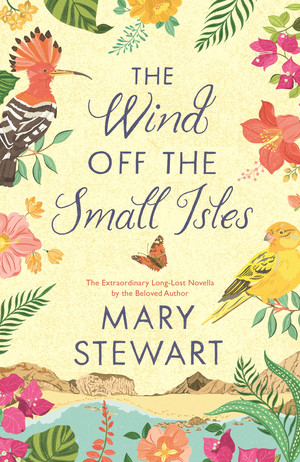 The ​Wind off the Small Isles Mary Stewart
0

Mary Stewart - The ​Wind off the Small Isles
Mary ​Stewart’s new story is lit with the special magic of people and of place that are the hallmarks of a famous author’s best work. In a series of deft brushtrokes she brings her heroine, Perdita—a beautiful twenty-three year old—to vivid life. A secretary to the redoutable children’s novelist, Cora Gresham, Perdita’s job carries her to the Canary Islands in search of local colour for a new masterpiece, and a peaceful house in which to write it. But the house is already occupied—once by the past, and the haunting memory of what happened there a century ago; and now by its present owners—very much alive—a famous playwright and his research assistant, Michael. In the fierce beauty of the volcanic landscape, in the persons of Perdita and Michael, past and present meet, violently. The weird, semi-deserted island of Lanzarote is the scene for the collision which reshapes the lives of the young lovers, as it did a hundred years ago.

Mary Stewart - Nine ​Coaches Waiting
A ​governess in a French château encounters an apparent plot against her young charge's life in this unforgettably haunting and beautifully written suspense novel. When lovely Linda Martin first arrives at Château Valmy as an English governess to the nine-year-old Count Philippe de Valmy, the opulence and history surrounding her seems like a wondrous, ecstatic dream. But a palpable terror is crouching in the shadows. Philippe's uncle, Leon de Valmy, is the epitome of charm, yet dynamic and arrogant—his paralysis little hindrance as he moves noiselessly in his wheelchair from room to room. Only his son Raoul, a handsome, sardonic man who drives himself and his car with equally reckless abandon, seems able to stand up to him. To Linda, Raoul is an enigma—though irresistibly attracted to him, she senses some dark twist in his nature. When an accident deep in the woods nearly kills Linda's innocent charge, she begins to wonder if someone has deadly plans for the young count. 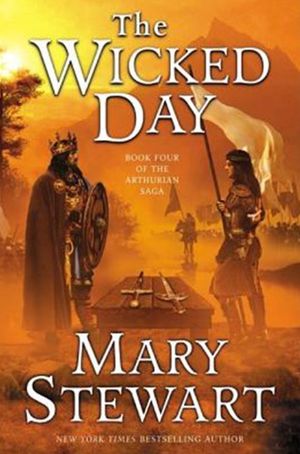 Mary Stewart - The ​Wicked Day
Now, ​the spellbinding, final chapter of King Arthur's reign, where Mordred, sired by incest and reared in secrecy, ingratiates himself at court, and sets in motion the Fates and the end of Arthur... 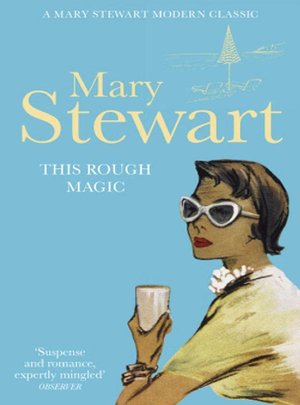 Mary Stewart - This ​Rough Magic
When ​Lucy Waring came to Corfu to visit her sister Phyllida Forli, she was elated to discover that the castello above their villa had been rented to Sir Julian Gale. A very minor cog in the London theatre, Lucy not unnaturally felt something close to reverence for Sir Julian, one of the brilliant lights of England's theatrical world. But any hope of meeting him was quickly dashed by Phyl, who indicated, with uncharacteristic vagueness, that not all was well with the great man and that his composer son, Max, discouraged visitors, particularly strangers . . . Lucy encounted Max Gale the first morning of her arrival—and a tempestuous meeting it was. For Lucy had made friends with an enchanting dolphin by whom she had first been thoroughly frightened then completely captivated. It was when she was sunning on the rocks above the cove that the shots came, and the only person in view was Max Gale . . . Thus begins a series of mystifying and thoroughly frightening events which tinge the otherwise sparkling setting of Corfu with the dark hues of violence. In every way This Rough Magic measures up to its predecessors—in spirited characterization, vivid description, glowing romance and unrelenting excitement. This is storytelling at its best. —jacket William Morrow edition, 1964 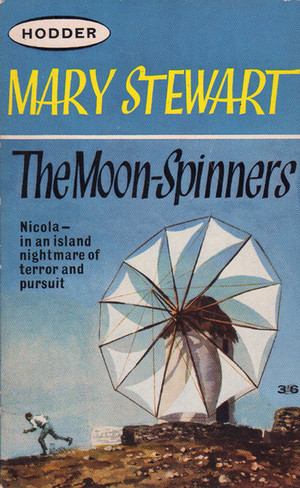 Mary Stewart - The ​Moonspinners
When ​Nicola arrives in Crete a day early, she gets more than just an extra day of holiday. She comes to a village where no one can be trusted, and she becomes involved in a murder mystery that puts her own life in danger. This story is set in a small village in the mountains of Crete. This is an island where people have strong feelings, where arguments begin suddenly, and end quickly. And Nicola has arrived in the middle of an argument that could end very quickly - with a gun. 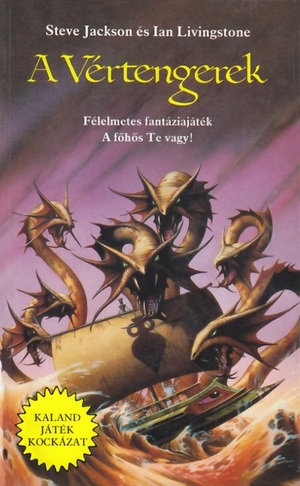