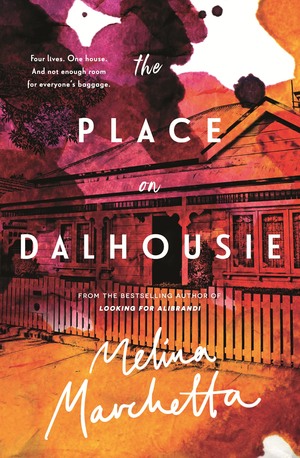 The ​Place on Dalhousie Melina Marchetta
0

Melina Marchetta - The ​Place on Dalhousie
You ​look the type to break your father’s heart.' 'Yeah, but he broke mine first.’ When Rosie Gennaro first meets Jimmy Hailler, she has walked away from life in Sydney, leaving behind the place on Dalhousie that her father, Seb, painstakingly rebuilt for his family but never saw completed. Two years later, Rosie returns to the house and living there is Martha, whom Seb Gennaro married less than a year after the death of Rosie’s mother. Martha is struggling to fulfil Seb’s dream, while Rosie is coming to terms with new responsibilities. And so begins a stand-off between two women who refuse to move out of the home they both lay claim to. As the battle lines are drawn, Jimmy Hailler re-enters Rosie’s life. Having always watched other families from the perimeters, he’s now grappling, heartbreakingly, with forming one of his own . . . An unforgettable story about losing love and finding love; about the interconnectedness of lives and the true nature of belonging, from one of our most acclaimed writers. 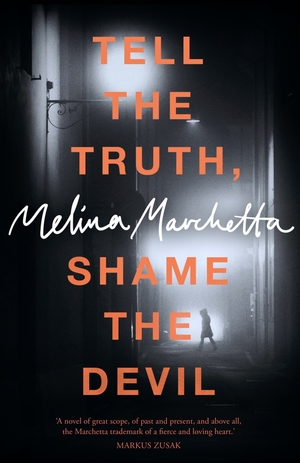 Melina Marchetta - Tell ​the Truth, Shame the Devil
Bashir ​“Bish” Ortley is a London desk cop. Almost over it. Still not dealing with the death of his son years ago, as well as the break-up of his marriage. Across the channel, a summer bus tour, carrying a group of English teenagers is subject to a deadly bomb attack, killing four of the passengers and injuring a handful of others. Bish’s daughter is one of those on board. The suspect is 17 year old Violette LeBrac whose grandfather was responsible for a bombing that claimed the lives of dozens of people fourteen years ago; and whose mother, Noor, has been serving a life sentence for the part she was supposed to have played in the attack. As Bish is dragged into the search for the missing Violette, he finds himself reluctantly working with Noor LeBrac and her younger brother, Jimmy Sarraf. And the more he delves into the lives of the family he helped put away, the more Bish realizes that they may have got it wrong all those years ago, and that truth wears many colours. Especially when it comes to the teenagers on board the recent bus bombing. Including his daughter. Tell the truth. Shame the devil. Bish can’t get Violette LeBrac’s words out of his head. But what he may get is some sort of peace with his own past as the worlds of those involved in two bombings, years apart, collide into the journey of his life. 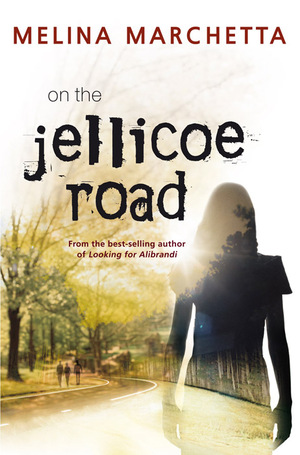 On ​the Jellicoe Road Melina Marchetta
0

Melina Marchetta - On ​the Jellicoe Road
My ​father took one hundred and thirty two minutes to die. I counted. It happened on the Jellicoe Road. The prettiest road I’d ever seen, where trees made breezy canopies like a tunnel to Shangri-La. We were going to the ocean, hundreds of kilometres away, because I wanted to see the ocean and my father said that it was about time the four of us made that journey. I remember asking, “What’s the difference between a trip and a journey?” and my father said, “Narnie, my love, when we get there, you’ll understand,” and that was the last thing he ever said. We heard her almost straight away. In the other car, wedged into ours so deep that you couldn’t tell where one began and the other ended. She told us her name was Tate and then she squeezed through the glass and the steel and climbed over her own dead – just to be with Webb and me; to give us her hand so we could clutch it with all our might. And then a kid called Fitz came riding by on a stolen bike and saved our lives. Someone asked us later, “Didn’t you wonder why no one came across you sooner?” Did I wonder? When you see your parents zipped up in black body bags on the Jellicoe Road like they’re some kind of garbage, don’t you know? ‘Wonder dies.’ 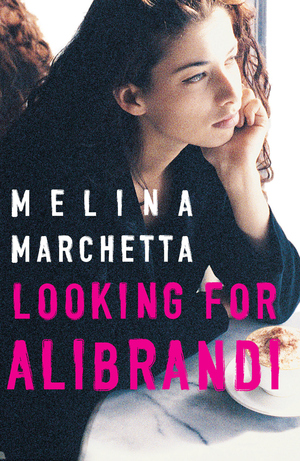 Melina Marchetta - Looking ​for Alibrandi
For ​as long as Josephine Alibrandi can remember, it’s just been her, her mom, and her grandmother. Now it’s her final year at a wealthy Catholic high school. The nuns couldn’t be any stricter—but that doesn’t seem to stop all kinds of men from coming into her life. Caught between the old-world values of her Italian grandmother, the nononsense wisdom of her mom, and the boys who continue to mystify her, Josephine is on the ride of her life. This will be the year she falls in love, the year she discovers the secrets of her family’s past—and the year she sets herself free. Told with unmatched depth and humor, this novel—which swept the pool of Australian literary awards and became a major motion picture—is one to laugh through and cry with, to cherish and remember. 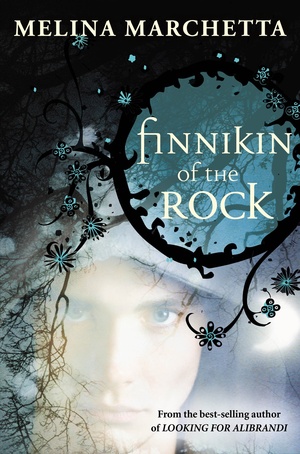 Finnikin ​of the Rock Melina Marchetta
1

Melina Marchetta - Finnikin ​of the Rock
At ​the age of nine, Finnikin is warned by the gods that he must sacrifice a pound of flesh to save his kingdom. He stands on the rock of the three wonders with his friend Prince Balthazar and Balthazar's cousin, Lucian, and together they mix their blood to safeguard Lumatere. But all safety is shattered during the five days of the unspeakable, when the king and queen and their children are brutally murdered in the palace. An impostor seizes the throne, a curse binds all who remain inside Lumatere's walls, and those who escape are left to roam the land as exiles, dying by the thousands in fever camps. Ten years later, Finnikin is summoned to another rock—to meet Evanjalin, a young novice with a startling claim: Balthazar, heir to the throne of Lumatere, is alive. This arrogant young woman claims she'll lead Finnikin and his mentor, Sir Topher, to the prince. Instead, her leadership points them perilously toward home. Does Finnikin dare believe that Lumatere might one day rise united? Evanjalin is not what she seems, and the startling truth will test Finnikin's faith not only in her but in all he knows to be true about himself and his destiny. In a bold departure from her acclaimed contemporary novels, Printz Medalist Melina Marchetta has crafted an epic fantasy of ancient magic, feudal intrigue, romance, and bloodshed that will rivet you from the first page. 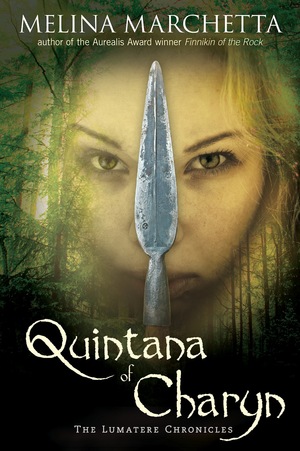 Melina Marchetta - Quintana ​of Charyn
Separated ​from the girl he loves and has sworn to protect, Froi must travel through Charyn to search for Quintana, the mother of Charyn's unborn king, and protect her against those who will do anything to gain power. But what happens when loyalty to family and country conflict? When the forces marshalled in Charyn's war gather and threaten to involve the whole of the land, including Lumatere, only Froi can set things right, with the help of those he loves. 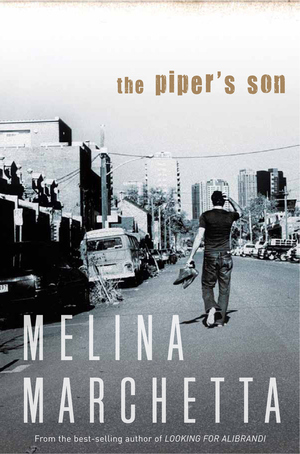 Melina Marchetta - The ​Piper's Son
Melina ​Marchetta's brilliant, heart-wrenching new novel takes up the story of the group of friends from her best-selling, much-loved book Saving Francesca - only this time it's five years later and Thomas Mackee is the one who needs saving. Thomas Mackee wants oblivion. Wants to forget parents who leave and friends he used to care about and a string of one-night stands, and favourite uncles being blown to smithereens on their way to work on the other side of the world. But when his flatmates turn him out of the house, Tom moves in with his single, pregnant aunt, Georgie. And starts working at the Union pub with his former friends. And winds up living with his grieving father again. And remembers how he abandoned Tara Finke two years ago, after his uncle's death. And in a year when everything's broken, Tom realises that his family and friends need him to help put the pieces back together as much as he needs them. 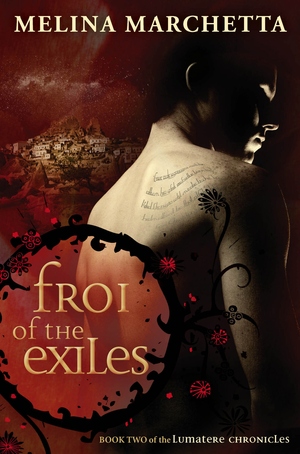 Froi ​of the Exiles Melina Marchetta
0

Melina Marchetta - Froi ​of the Exiles
From ​master storyteller Melina Marchetta comes an exhilarating new fantasy springing from her celebrated epic, Finnikin of the Rock. Three years after the curse on Lumatere was lifted, Froi has found his home . . . or so he believes. Fiercely loyal to the Queen and Finnikin, Froi has been taken roughly and lovingly in hand by the Guard sworn to protect the royal family, and has learned to control his quick temper with a warrior's discipline. But when he is sent on a secretive mission to the kingdom of Charyn, nothing could have prepared him for what he finds in its surreal royal court. Soon he must unravel both the dark bonds of kinship and the mysteries of a half-mad princess in this barren and mysterious place. It is in Charyn that he will discover there is a song sleeping in his blood . . . and though Froi would rather not, the time has come to listen. 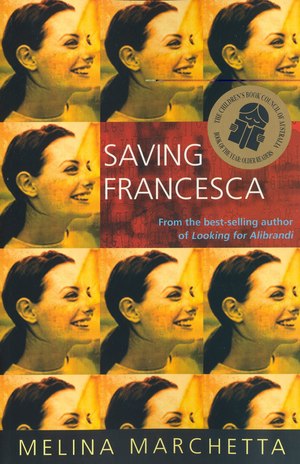 Melina Marchetta - Saving ​Francesca
Francesca ​is stuck at St. Sebastians, a boys' school that's pretends it's coed by giving the girls their own bathroom. Her only female companions are an ultra-feminist, a rumored slut, and an an impossibly dorky accordion player. The boys are no better, from Thomas who specializes in musical burping to Will, the perpetually frowning, smug moron that Francesca can't seem to stop thinking about. Then there's Francesca's mother, who always thinks she knows what's best for Francesca—until she is suddenly stricken with acute depression, leaving Francesca lost, alone, and without an inkling who she really is. Simultaneously humorous, poignant, and impossible to put down, this is the story of a girl who must summon the strength to save her family, her social life and—hardest of all—herself. 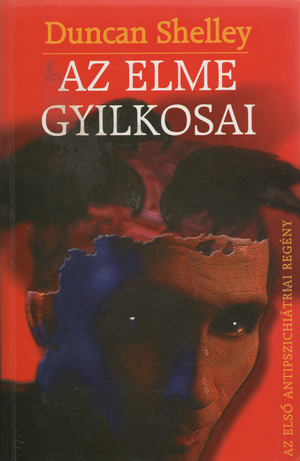