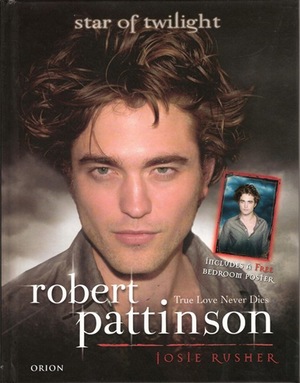 Josie Rusher - Kristen ​Stewart - Infinite romance
Kristin ​Stewart, the beautiful Bella in the screen version of Stephanie Meyers’s Twilight saga, has become Hollywood’s hottest young actress, set for global stardom. In this book you can learn everything you need to know about this interesting, beautiful and glamorous film star. From her early roles in films with Jodie Foster and Sharon Stone, Kristen showed her true potential as a child star who could make it big. But nothing was to prepare her for global superstardom when it was announced that Kirsten was to play Isabella 'Bella' Swan in the movie Twilight, based on Stephenie Meyer's bestselling vampire/romance novels. Alongside Robert Pattinson, her vampire boyfriend, Kristen smashed box office records, became a teen idol and confirmed herself as the actor most teens would like to be. 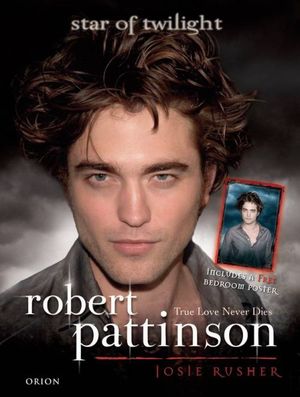 Josie Rusher - Robert ​Pattinson (angol)
As ​the gorgeous vampire hero of Twilight, Robert Pattinson worked his hypnotic magic on teenage girls…and became a superstar. All the information his millions of fans want to know is right here, complete with plenty of photos to swoon over. Follow Pattinson’s meteoric rise to fame, from his early days as a model and his role as Cedric Diggory in the Harry Potter series to his new success as the brooding Edward Cullen. Read all about Robert's interests, his passion for music, and how he feels about becoming a teen heartthrob. Get the inside gossip on the filming of Twilight and his co-stars…as well as plans for the sequel. With all that—and a free pull-out bedroom poster, too—this book has everything!

Josie Rusher - Taylor ​Lautner
Not ​all of Twilight’s male hotties are vampires! Taylor Lautner, who plays the werewolf Jacob Black, is about to hit new heights of superstardom. That’s because New Moon, the next film adaptation in the popular series, will uncover his story. So it’s time for fans to learn more about this appealing actor. Taylor Lautner Me & You follows Taylor from his early days in TV commercials to his appearances in 3D movies and, finally, to the role of a lifetime. Read all about his loves, interests, passion for acting, and feelings about being a heartthrob. There’s also plenty of inside gossip on New Moon, of course - and a free full colour pull-out poster, too! A bit more about Taylor Taylor Daniel Lautner (born February 11, 1992 in Grand Rapids, Michigan) is an American actor and martial artist who is perhaps best known for his 2005 performances in the family films The Adventures of Sharkboy and Lavagirl in 3-D, Cheaper by the Dozen 2, and as Jacob Black in the Twilight movies. Taylor began acting in 2001, appearing in the made-for-television film Shadow Fury. He subsequently had roles on the series Summerland, The Bernie Mac Show, and My Wife and Kids. He appeared as himself in America's Most Talented Kids, putting on an exhibition of his Martial Arts skills. In addition to television, he has been very successful in voice-over work. He has booked a recurring role as Youngblood on the cartoon Danny Phantom, and has recorded episodes of What's New, Scooby-Doo? and He's a Bully, Charlie Brown. His big break came in 2005 when, at the age of thirteen, Lautner won the role of Shark Boy in the Robert Rodriguez film, The Adventures of Sharkboy and Lavagirl in 3-D, a film that showcased his martial arts skills. Lautner played Native American character Jacob Black in Twilight, the movie adaptation of the novel by Stephenie Meyer. Due to major physical changes that occur in the character of Jacob Black throughout the series, the director of Twilight's sequel, New Moon, considered replacing Lautner with a different actor in the second film. In an attempt to keep the role, Lautner weight-trained excessively and gained approximately 30 pounds. Lautner will be reprising his role as Jacob in New Moon. Lautner has also been cast in the film Valentine's Day as Tyler Harrinton.

Josie Rusher - Robert ​Pattinson annual 2010
He’s ​talented, sexy, and here to stay! Twilight star Robert Pattinson is officially the world’s hottest young actor, and this yearbook takes fans closer to him than ever before. Star-struck admirers will learn the latest gossip from the set of New Moon, get heart-fluttering new photos, and enjoy a range of puzzles, quizzes (see which Twilight character you’re most like), and lots more.