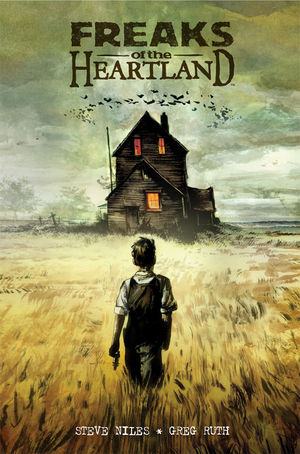 Freaks ​of the Heartland Steve Niles
1

Steve Niles - Freaks ​of the Heartland
Trevor ​Owen has a younger brother who lives in the barn behind the house, too monstrous to be let into the house. The boy's only six years old, but he towers over his older brother, and possesses monstrous strength. For years, Trevor has looked after his baby brother, keeping him from the light, but now that's all about to change. His family's profane secret is about to be revealed, uncovering the horrible truth of the small midwestern town the boys have grown up in. Prepare to have your expectations about horror comics changed, with this bizarre tale from the writer of the best-selling horror comics in years. 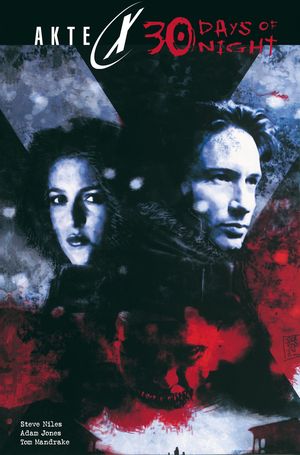 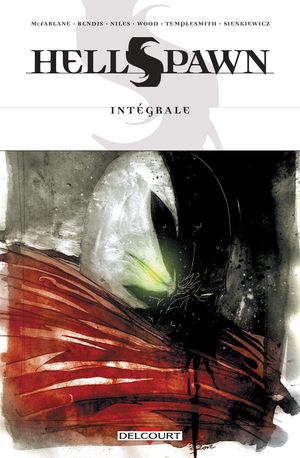 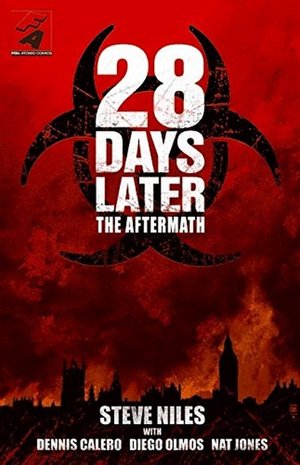 Steve Niles - 28 ​Days Later: The Aftermath
Two ​idealistic scientists unwittingly developing the deadliest virus the world has ever known...A family making desperate choices as they struggle to survive the Infection's initial outbreak...A lone gunslinging survivor battling the Infected in a decimated London...Four original tales chronicling the greatest horror humanity has ever faced come together in a bloody conclusion as terrifying as the Rage Virus itself. Written by horror master Steve Niles (creator of the classic 30 Days of Night) and illustrated by three of the most terrifyingly talented illustrators working in comics today, 28 Days Later: The Aftermath begins before the hit movie—and ends with a shocking revelation that leads into the events of the sequel, 28 Weeks Later. 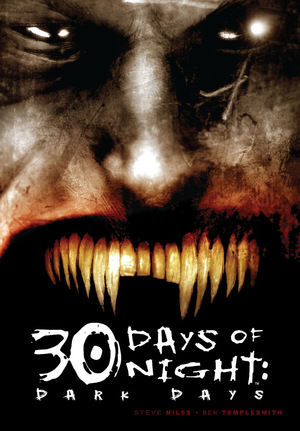 Steve Niles - 30 ​Days of Night: Dark Days
This ​story follows Stella Olemaun's efforts to warn the world about the threat the vampires pose - the vampires who overran Barrow, Alaska, killing her husband and most of the town. With an exclusive introduction by screenwriter Eric Red (The Hitcher, Near Dark), the flat-out terror of Dark Days will reaffirm the dominance of Niles and Templesmith over the realm of illustrated horror fiction. 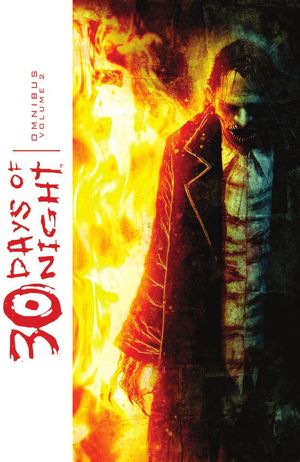 Steve Niles - 30 ​Days of Night Omnibus 2.
Go ​deeper into the night with this continuation of the vampire tale that put horror comics back on the map! Series creators Steve Niles and Ben Templesmith, joined by a cast of all-star comics talent, bring you multiple stories of blood and darkness. First, it's two stories for the price of one in Bloodsucker Tales. Kody Chamberlain provides art for Steve Niles' story, "Dead Billy Dead," in which a young man is turned into a vampire only to be abducted, along with his girlfriend, by an obssesive scientist. Then, superstar writer Matt Fraction (Sex Criminals) gets the Templesmith treatment with "Juarez," in which Lex Nova investigates the disappearances of hundreds of girls in a Mexican border town. He suspects vampire involvement. Unfortunately, an entire tribe of territorial vampires thinks the same thing. In Eben & Stella, find out what happened to the heroes of Barrow after the end of Dark Days, and before their appearance in Return to Barrow. Featuring Kelly Sue DeConnick (Bitch Planet) and Justin Randall (Changing Ways). In Templesmith's Red Snow, readers will discover that vampires aren't just a modern-day problem, and British military attaché Charle Keating, observing the battle on the eastern front from the Soviet side, will discover that, no matter how hard humanity tries to kill itself, something else does it better. Finally, Barrow may deal with yearly vampire assaults, but the entire Arctic Circle gets its share of polar night. What monsters lurk in this endless dark? Go Beyond Barrow, with Niles and superstar artist Bill Sienkiewicz (New Mutants). Collects four full volumes of the 30 Days of Night saga: Bloodsucker Tales, Eben & Stella, Red Snow, and Beyond Barrow. 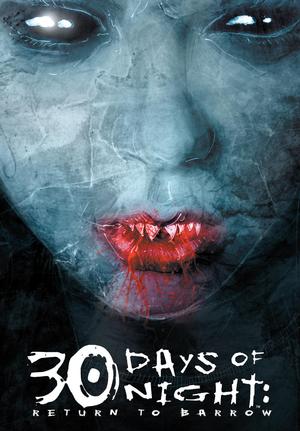 Steve Niles - 30 ​Days of Night: Return to Barrow
The ​21st century has seen a horror comics renaissance, and it all started with Steve Niles and Ben Templesmith's frostbitten vampire saga 30 Days of Night. The original three issue series spawned a major motion picture and grabbed the attention of thousands of fans longing for an innovative tale of terror. In Return to Barrow, Niles and Templesmith bring us, once again, to the snow-crusted Alaskan town where the setting sun ignites a new winter of terror for the beleagured townspeople. Brian Kitka is desperate to find out what happened to his brother three years ago, and becoming the new sheriff may get him the answers he needs. But some things are best left in the dark, and Brian will need more than just the help of a few old friends if anyone's going to be alive come sunrise. 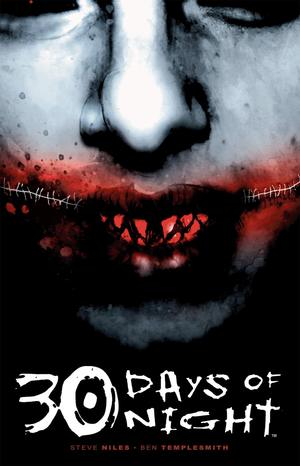 Steve Niles - 30 ​Days of Night
In ​a sleepy, secluded Alaska town called Barrow, the sun sets and doesn't rise for over thirty consecutive days and nights. From the darkness, across the frozen wasteland, an evil will come that will bring the residents of Barrow to their knees. The only hope for the town is the Sheriff and Deputy, husband and wife who are torn between their own survival and saving the town they love. 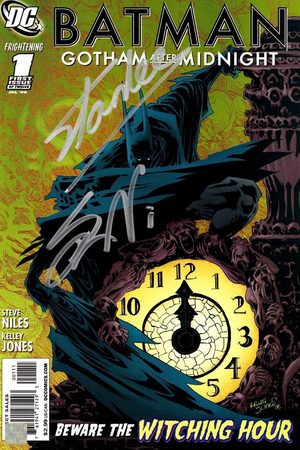 Steve Niles - Batman: ​Gotham after Midnight
As ​the clocks strike twelve, a ghastly figure haunts the darkened streets of Gotham City. First serialised as a twelve-issue mini-series, this special edition collects the 12-issue series in one fantastic hardback book Batman: Gotham After Midnight. A gothic-inspired take on the Dark Knight and his world by horror maestros Steve Niles and Kelley Jones. No stranger to the world of Batman, Jones brought his A-game to the project, fusing traditional horror motifs with grandiose superhero concepts – creating a style that was simultaneously nostalgic and forward-looking. The story so far: welcome to Halloween in Gotham City, October 31st in Gotham City - the scariest day of the year. Some things go 'bump' in the night. But be thankful that one of those things is on our side. It's the night when trick-or-treating can be terrifying and tragic. The mysterious Midnight is on a mission of personal vengeance. Those who fall short of his high moral standards must pay the price – and surrender their hearts! Unless Batman can solve the mystery of Midnight’s identity soon, he’ll lose the trust of his beloved city and fear will triumph over hope. BATMAN: GOTHAM AFTER MIDNIGHT Originally published as Batman: Gotham After Midnight #1-12, July 2008-June 2009. 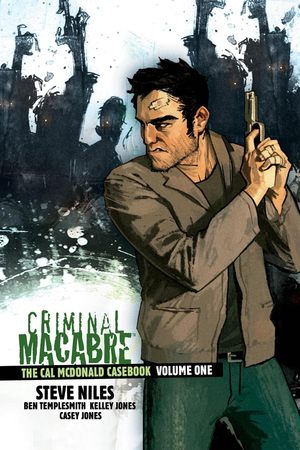 Steve Niles - Criminal ​Macabre: The Cal Mcdonald Casebook 1.
In ​the dark and gritty town of Los Angeles, one man stands between humans and... everything else. Cal McDonald, private detective with scotch for blood, investigates the cases that no one else will. Mummies&demons, frankenstein creations, and possessed cars. Collects Criminal Macabre: A Cal McDonald Mystery #1#5, "A Letter from B.S." from the Dark Horse comic Drawing on Your Nightmares, Love Me Tenderloin, Last Train to Deadsville #1#4, Criminal Macabre: Supernatural Freak Machine #1#5, Hairball, and the prose Savage Membrane. 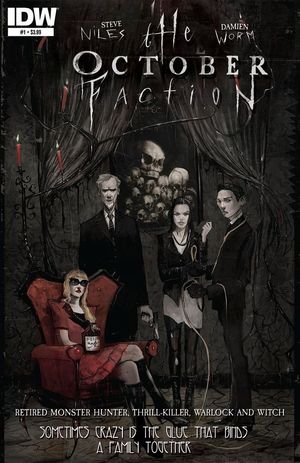 Steve Niles - The ​October Faction 1.
The ​October Faction details the adventures of retired monster-hunter Frederick Allan and his family... which include a thrill-killer, a witch, and a warlock. Because sometimes crazy is the glue that binds a family together. 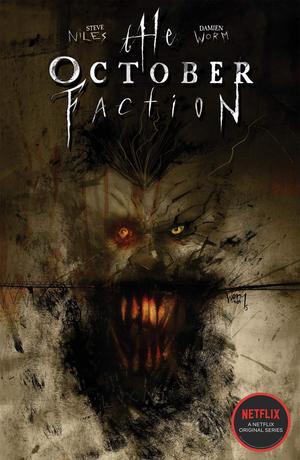 Steve Niles - The ​October Faction 2.
The ​Allan family has inducted Dante, a.k.a. Robot Face, into the fold and Geoff and Vivian have begun their training in the family business; monster hunting. All looks well for the Allans, but Sheriff Chambers is slowly catching on to their occult activities. Collects issues #7-12. 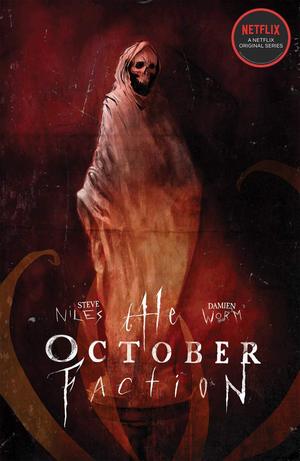 Steve Niles - The ​October Faction 3.
Merle ​Cope and his frightful family have been destroyed and Fred Allan has been rescued. Now that the kids have proven themselves, the whole Allan family is back in business, ready to take on the monstrous, paranormal, and downright strange. Collects issues #13 18." 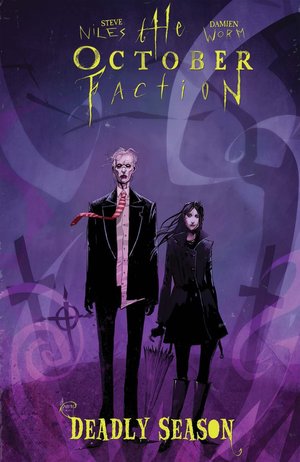 Steve Niles - The ​October Faction 4.
Ghouls ​in the graveyard! Giant Monsters downtown! The Allan family comes face to face with a whole new threat. This one comes from the past and it won't stop until the Allan's are dead.