Yoshihiro Togashi - Hunter ​x Hunter 22.
Having ​lost their queen, the Chimera Ants are spreading beyond their native homeland to establish their own colonies. Some attack Meteor City, and the group of assassins known as the Spiders, are called home to fend off the invasion. Meanwhile, in the Republic of East Gorteau, Gon and Killua realize that entire populations of towns are going missing. They decide to find out what's happening and try to stop it, but Gon soon realizes he's not alone, and whoever's following him is not friendly! Yoshihiro Togashi - Hunter ​x Hunter 12.
The ​Spiders unravel the clues that will bring them ever closer to Kurapika's identity. Meanwhile, Kurapika's desire for revenge is rekindled when he learns that the Spiders are still alive. And though the bounty on the Spiders has been withdrawn, Gon persuades Killua to help Kurapika awhile longer, if only to bring the cycle of killing to an end. Then, during a mad chase through the crowded streets of Yorknew, the Spiders capture Gon and Killua again! Will Kurapika and Leorio be able to set them free? And will Kurapika finally get his revenge? Yoshihiro Togashi - Yu ​Yu Hakusho 13.
This ​is it folks--the conclusion of the long and deadly Dark Tournament. But don't worry--there's lots more to come because a new adventure starts with this volume! After the Dark Tournament ends, Yusuke and friends come home for a much deserved rest. The vacation is cut short when Yusuke is taken hostage by three classmates who have recently gained strange powers. It's up to Kuwabara and friends to try to rescue him. But without their star fighter's abilities, will they be up to the task? Yoshihiro Togashi - Hunter ​x Hunter 1.
Gon ​might be a country boy, but he has high aspirations. Despite his Aunt Mito's protests, Gon decides to follow in his father's footsteps and become a legendary Hunter. The Hunter hopefuls begin their journey by storm-tossed ship, where Gon meets Leorio and Kurapika, the only other applicants who aren't devastated by bouts of seasickness. Having survived the terrors of the high seas, Gon and his companions now have to prove their worth in a variety of tests in order to find the elusive Exam Hall. And once they get there, will they ever leave alive...? Yoshihiro Togashi - Hunter ​x Hunter 36.
The ​princes begin to move against each other as the Succession War continues on the Whale Ship when Second Prince Camilla attempts to assassinate First Prince Benjamin. Meanwhile, something fishy is going on in Thirteenth Prince Marayam’s room. The Spiders appear and make their move as well! Will Kurapika be able to keep up with the madness and murders taking place on the ship?! Yoshihiro Togashi - Hunter ​x Hunter 21.
The ​Chimera Ant king is born, bursting from the stomach of the queen--a violent birth for a violent being. He makes his first move on the neighboring country by manipulating its dictator to summon all the citizens to a ceremony at the capital. There he plans to Nen-baptize them, which will kill 99 percent of the population. The remaining one percent will have their Nen awakened, thus providing a healthy snack for the new king that not only tastes good but greatly increases his power. Can Gon and Killua find a way to stop this brutal Ant king? 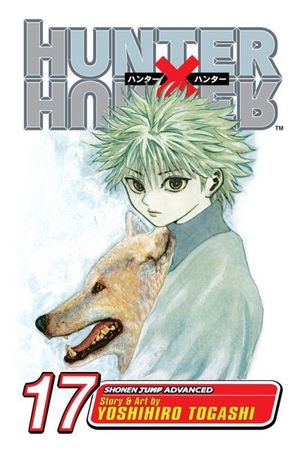 Yoshihiro Togashi - Yu ​Yu Hakusho 11.
The ​Dark Tournament is finally down to the wire. After a long trail of brutal bloodshed, the stage has been set for the ultimate showdown between Team Urameshi and Team Toguro. And now that Kurama can transform into a fox demon at will by drinking the potion from the Seed of De-Incarnation--a lovely parting gift from Suzuki, The Beautiful Fighter--his ferocious plants have been given a much-needed energy boost. Meanwhile, Sakyo reveals that his grand plan is to create a path between the demon plane and the human world, allowing powerful demons to come through and wreak havoc in the human realm. Could this be the beginning of the end for humans...? Yoshihiro Togashi - Hunter ​x Hunter 13.
Hunters ​Gon and Killua have fallen into the clutches of the sinister gang known as the Spiders. Luckily, the Hunters' friend Kurapika has captured the Spiders' ringleader and proposed a hostage exchange. Will the Spiders agree to the plan? Meanwhile, a multi-trillionaire named Battera has been buying up copies of the super-rare video game Greed Island, which may contain clues about Gon's father's whereabouts. More importantly, Battera has been hiring Hunters to play the game for him! Could this be Gon's chance to enter the legendary game? Yoshihiro Togashi - Hunter ​x Hunter 31.
The ​time has come for the Hunter Association to choose a new chairman, but it’s shaping up to be anything but a clean election. While the world’s Hunters descend into dirty politics, Gon remains hospitalized in critical condition. Killua knows of a way to save him, but it will mean facing his deadly family of assassins…and the deadliest and strangest of them all, Killua’s little sibling Alluka… Yoshihiro Togashi - Yu ​Yu Hakusho 15.
Kuwabara's ​been kidnapped! Unbeknownst to anyone--especially him--his aura sword is so powerful it can actually cut holes between dimensions, which is exactly what his kidnapper Sensui is after. But Yusuke's not giving up so easily and sets off in pursuit on a bicycle. Then Yusuke and his old friends and new allies are put to the test when they battle a bratty little kid in a deadly video game contest! From trivia to battle tennis, the contest heats up! Who will come out on top and who will face the dreaded "Game Over"?