The ​History of Rasselas, Prince of Abissinia Samuel Johnson
2

Samuel Johnson - The ​History of Rasselas, Prince of Abissinia
In ​Samuel Johnson’s classic philosophical tale, the prince and princess of Abissinia escape their confinement in the Happy Valley and conduct an ultimately unsuccessful search for a choice of life that leads to happiness. Johnson uses the conventions of the Oriental tale to depict a universal restlessness of desire. The excesses of Orientalism—its superfluous splendours, its despotic tyrannies, its riotous pleasures—cannot satisfy us. His tale challenges us by showing the problem of finding happiness to be insoluble while still dignifying our quest for fulfillment.

Samuel Johnson - Lives ​of the English Poets
Johnson’s ​last great work, Prefaces, Biographical and Critical, to the Works of the English Poets (conventionally known as The Lives of the Poets), was conceived modestly as short prefatory notices to an edition of English poetry. When Johnson was approached by some London booksellers in 1777 to write what he thought of as “little Lives, and little Prefaces, to a little edition of the English Poets,” he readily agreed. He loved anecdote and “the biographical part” of literature best of all. The project, however, expanded in scope; Johnson’s prefaces alone filled the first 10 volumes (1779–81), and the poetry grew to 56 volumes. Johnson was angered by the appearance of his name on the spines, because he had neither “recommended” nor “revised” these poets, except for adding Isaac Watts, Sir Richard Blackmore, John Pomfret, Thomas Yalden, and James Thomson to the list. 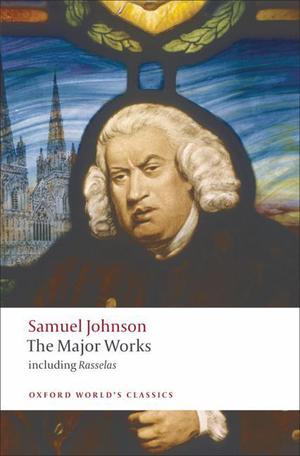 Samuel Johnson - The ​Major Works
This ​authoritative edition was formerly published in the acclaimed Oxford Authors series under the general editorship of Frank Kermode. It brings together a unique combination of Johnson's poetry and prose - all the major poems, complemented by essays, criticism, and fiction - to give the essence of his work and thinking. Samuel Johnson's literary reputation rests on such a varied output that he defies easy description: poet, critic, lexicographer, travel writer, essayist, editor, and, thanks to his good friend Boswell, the subject of one of the most famous English biographies. This volume celebrates Johnson's astonishing talent by selecting widely across the full range of his work. It includes 'London' and 'The Vanity of Human Wishes' among other poems, and many of his essays for the Rambler and Idler. The prefaces to his edition of Shakespeare and his famous Dictionary, together with samples from the texts, are given, as well as selections from A Journey to the Western Islands of Scotland, the Lives of the Poets, and Rasselas in its entirety. There is also a substantial representation of lesser-known prose, and of his poetry, letters, and journals.