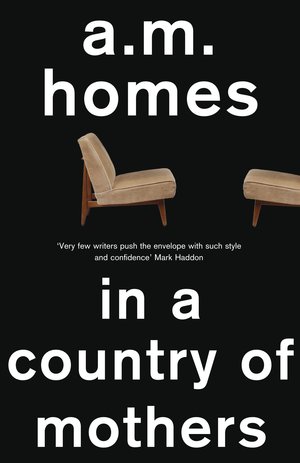 A. M. Homes - In ​a Country of Mothers
No ​relationship is more charged than that between a psychotherapist and her patient—unless it is the relationship between a mother and her daughter. This disturbing literary thriller explores what happens when the line between those relationships blurs. Jody Goodman enters psychotherapy with questions of career and love on her mind. But Claire Roth, her therapist, keeps changing the focus of their sessions to Jody's parentage—Jody was adopted; Claire gave up a baby for adoption who would now be exactly Jody's age. As the two women become increasingly involved, speculation turns into certainty, fantasy into fixation. Until suddenly it is no longer clear just which of them needs the other more—or with more terrifying consequences. 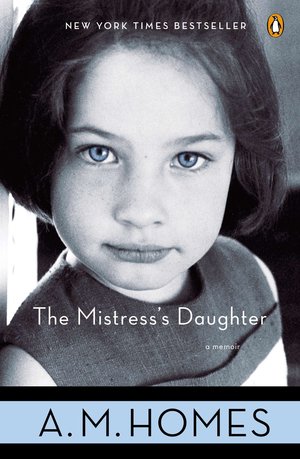 The ​Mistress's Daughter A. M. Homes
0

A. M. Homes - The ​Mistress's Daughter
Before ​A.M. Homes was born, she was put up for adoption. Her birth mother was a twenty-two-year-old single woman who was having an affair with a much older married man with children of his own. The Mistress's Daughter is the story of what happened when, thirty years later, her birth parents came looking for her. Homes, renowned for the psychological accuracy and emotional intensity of her storytelling, tells how her birth parents initially made contact with her and what happened afterward (her mother stalked her and appeared unannounced at a reading) and what she was able to reconstruct about the story of their lives and their families. Her birth mother, a complex and lonely woman, never married or had another child, and died of kidney failure in 1998; her birth father, who initially made overtures about inviting her into his family, never did. Then the story jumps forward several years to when Homes opens the boxes of her mother's memorabilia. She had hoped to find her mother in those boxes, to know her secrets, but no relief came. She became increasingly obsessed with finding out as much as she could about all four parents and their families, hiring researchers and spending hours poring through newspaper morgues, municipal archives and genealogical Web sites. This brave, daring, and funny book is a story about what it means to be adopted, but it is also about identity and how all of us define our sense of self and family. 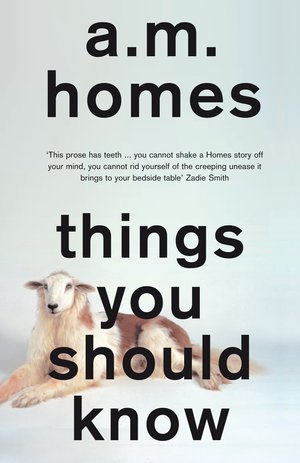 Things ​You Should Know A. M. Homes
0

A. M. Homes - Things ​You Should Know
'The ​best collection of short stories I read this year ... profound weirdness, unorthodox sex-acts, wonderful prose and the sense that you are being taken for a stout walk along the frontier of modern fiction' Mark Haddon, _Scotsman_ 'This prose has teeth ... You cannot shake a Homes story off your mind, you cannot rid yourselff of the creeping unease it brings to your bedside table' Zadie Smith 'Home's stories make you laugh out loud then finally break your heat. That's why she has and deserves her A-list status' _Independent_ 'The prosaic and the biyarre are combined with a skill and wit that few can match ... with every story Homes is able to unsettle us, and to create an entire world' _Observer_ 'Insanely good' Dave Eggers 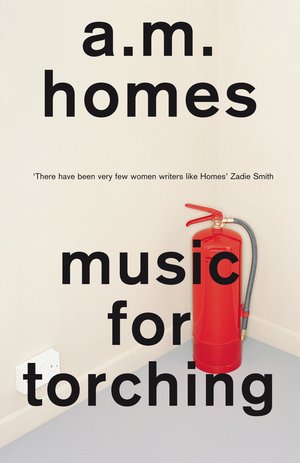 A. M. Homes - Music ​for Torching
Flash-frozen ​in the anxious culture of a suburban subdivision, Paul and Elaine have two boys and a beautiful home, yet they find themselves thoroughly, inexplicably stuck. Obsessed with "making things good again," they spin the quiet terrors of family life into a fantastical frenzy that careens out of control, doing and saying all the things we dare not, throwing into full relief the chasm between our public and private selves. From a strange and hilarious encounter on the floor of the pantry with a Stepford-wife neighbor to an ill-conceived plan for a tattoo, to a sexy town cop who shows up at every inopportune moment, to a house-cleaning team in space suits, to a mistress calling on the cell phone, to a hostage situation at the school, Homes creates characters so outrageously flawed and deeply human that they are entirely believable. 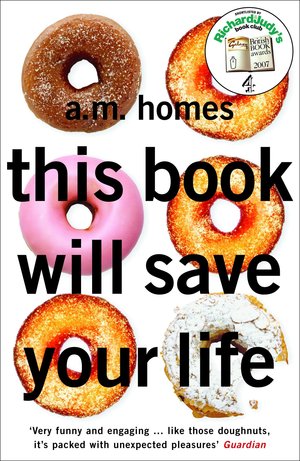 This ​Book Will Save Your Life A. M. Homes
0

A. M. Homes - This ​Book Will Save Your Life
Short ​listed for the Richard & Judy Book Club 2007. An uplifting story set in Los Angeles about one man's effort to bring himself back to life. Richard is a modern day everyman; a middle-aged divorcee trading stocks out of his home. He has done such a good job getting his life under control that he needs no one. His life has slowed almost to a standstill, until two incidents conspire to hurl him back into the world. One day he wakes up with a knotty cramp in his back, which rapidly develops into an all-consuming pain. At the same time a wide sinkhole appears outside his living room window, threatening the foundations of his house. A vivid novel about compassion and transformation, "This Book Will Save Your Life" reveals what can happen if you are willing to open up to the world around you. Since her debut in 1989, A.M. Homes has been among the boldest and most original voices of her generation, acclaimed for the psychological accuracy and unnerving emotional intensity of her storytelling. Her keen ability to explore how extraordinary the ordinary can be is at the heart of her touching and funny new novel, her first in six years. 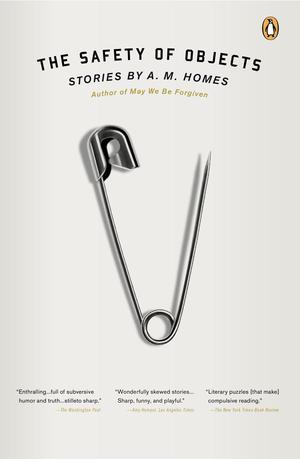 A. M. Homes - The ​Safety of Objects
The ​breakthrough story collection that established A. M. Homes as one of the most daring writers of her generation. Originally published in 1990 to wide acclaim and later adapted into a film starring Glenn Close, Patricia Clarkson, and Kristen Stewart, this extraordinary first collection of stories by A. M. Homes confronts the real and the surreal on even terms to create a disturbing and sometimes hilarious vision of the American dream. Included here are "Adults Alone," in which a couple drops their kids off at Grandma's and gives themselves over to ten days of Nintendo, porn videos, and crack; "A Real Doll," in which a girl's blond Barbie doll seduces her teenaged brother; and "Looking for Johnny," in which a kidnapped boy, having failed to meet his abductor's expectations, is returned home. These stories, by turns satirical, perverse, unsettling, and utterly believable, expose the dangers of ordinary life even as their characters stay hidden behind the disguises they have so carefully created. 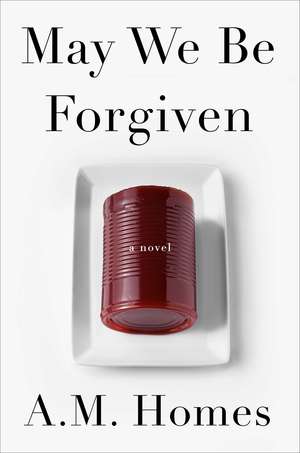 A. M. Homes - May ​We Be Forgiven
A ​darkly comic novel of twenty-first-century domestic life and the possibility of personal transformation Harold Silver has spent a lifetime watching his younger brother, George, a taller, smarter, and more successful high-flying TV executive, acquire a covetable wife, two kids, and a beautiful home in the suburbs of New York City. But Harry, a historian and Nixon scholar, also knows George has a murderous temper, and when George loses control the result is an act of violence so shocking that both brothers are hurled into entirely new lives in which they both must seek absolution. Harry finds himself suddenly playing parent to his brother’s two adolescent children, tumbling down the rabbit hole of Internet sex, dealing with aging parents who move through time like travelers on a fantastic voyage. As Harry builds a twenty-first-century family created by choice rather than biology, we become all the more aware of the ways in which our history, both personal and political, can become our destiny and either compel us to repeat our errors or be the catalyst for change. May We Be Forgiven is an unnerving, funny tale of unexpected intimacies and of how one deeply fractured family might begin to put itself back together.

A. M. Homes - The ​End of Alice
Only ​a work of such searing, meticulously controlled brilliance couldprovoke such a wide range of visceral responses. Here is the incredible story of an imprisoned pedophile who is drawn into an erotically charged correspondence with a nineteen-year-old suburban coed. As the two reveal -- and revel in -- their obsessive desires, Homes creates in The End of Alice a novel that is part romance, part horror story, at once unnerving and seductive. 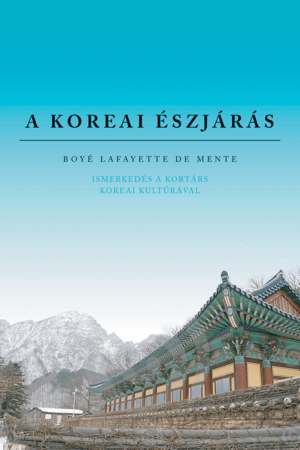