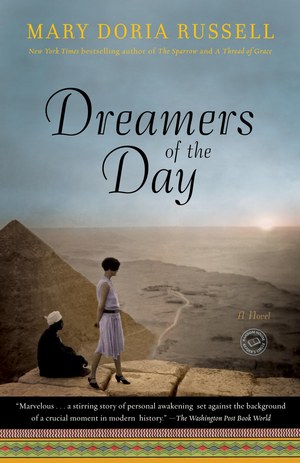 Mary Doria Russell - Dreamers ​of the Day
'I ​am sure of this much: my little story has become your history. You won't really understand your times until you understand mine'. Reeling from the aftermath of the twin tragedies of the Great War and the influenza epidemic, diffident schoolteacher Agnes Shanklin has taken the trip of a lifetime: to Egypt and the Holy Land. But her arrival at Cairo's Semiramis Hotel coincides with an event that will change history. For the year is 1921 and the Cairo Peace Conference is about to preside over nothing less than the creation of the modern Middle East. At first Agnes acts as a welcome sounding board for the historic players - Churchill, T. E. Lawrence and Lady Gertrude Bell among them - poised to invent the nations of Iraq, Syria, Lebanon, Israel, Jordan and so decide the fate of the Arab world. Yet as the tumultuous days pass, she attracts the attention of a charismatic German spy and is inexorably drawn into the duplicitous, dangerous world of geopolitical intrigue. As enlightening as it is entertaining, this compelling, passionately felt novel casts brilliant and perceptive light on what lies behind so many of today's headlines. 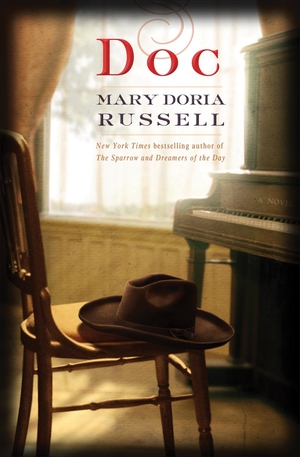 Mary Doria Russell - Doc
The ​year is 1878, peak of the Texas cattle trade. The place is Dodge City, Kansas, a saloon-filled cow town jammed with liquored-up adolescent cowboys and young Irish hookers. Violence is random and routine, but when the burned body of a mixed-blood boy named Johnnie Sanders is discovered, his death shocks a part-time policeman named Wyatt Earp. And it is a matter of strangely personal importance to Doc Holliday, the frail twenty-six-year-old dentist who has just opened an office at No. 24, Dodge House. Beautifully educated, born to the life of a Southern gentleman, Dr. John Henry Holliday is given an awful choice at the age of twenty-two: die within months in Atlanta or leave everyone and everything he loves in the hope that the dry air and sunshine of the West will restore him to health. Young, scared, lonely, and sick, he arrives on the rawest edge of the Texas frontier just as an economic crash wrecks the dreams of a nation. Soon, with few alternatives open to him, Doc Holliday is gambling professionally; he is also living with Mária Katarina Harony, a high-strung Hungarian whore with dazzling turquoise eyes, who can quote Latin classics right back at him. Kate makes it her business to find Doc the high-stakes poker games that will support them both in high style. It is Kate who insists that the couple travel to Dodge City, because “that’s where the money is.” And that is where the unlikely friendship of Doc Holliday and Wyatt Earp really begins—before Wyatt Earp is the prototype of the square-jawed, fearless lawman; before Doc Holliday is the quintessential frontier gambler; before the gunfight at the O.K. Corral links their names forever in American frontier mythology—when neither man wanted fame or deserved notoriety. Authentic, moving, and witty, Mary Doria Russell’s fifth novel redefines these two towering figures of the American West and brings to life an extraordinary cast of historical characters, including Holliday’s unforgettable companion, Kate. First and last, however, Doc is John Henry Holliday’s story, written with compassion, humor, and respect by one of our greatest contemporary storytellers. 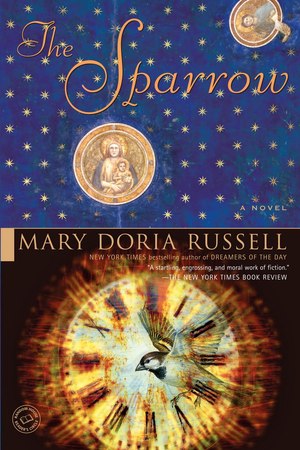 Mary Doria Russell - The ​Sparrow
In ​2019, humanity finally finds proof of extraterrestrial life when a listening post in Puerto Rico picks up exquisite singing from a planet which will come to be known as Rakhat. While United Nations diplomats endlessly debate a possible first contact mission, the Society of Jesus quietly organizes an eight-person scientific expedition of its own. What the Jesuits find is a world so beyond comprehension that it will lead them to question the meaning of being "human." When the lone survivor of the expedition, Emilio Sandoz, returns to Earth in 2059, he will try to explain what went wrong... Words like "provocative" and "compelling" will come to mind as you read this shocking novel about first contact with a race that creates music akin to both poetry and prayer. 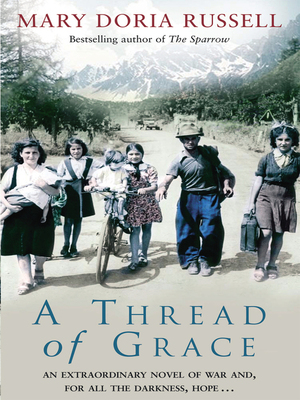 Mary Doria Russell - A ​Thread of Grace
8th ​September 1943, and Claudette Blum and her father are among thousands of Jewish refugees fleeing over the Alps towards Italy. For the Italians have broken with Hitler and sued for peace, and here the Blums hope to find safety at last. But overnight the Nazis seize control and the country becomes a battleground - for the occupying German forces, the advancing allies, partisans, Jews in hiding and ordinary Italians simply trying to survive. Against this dramatic backdrop and through the lives of a multitude of beautifully drawn characters - a mercurial resistance leader, a priest, an Italian rabbi and his family, and a disillusioned Wehrmacht doctor - Mary Doria Russell tells the little-known story of those who sought refuge in Italy during the final phase of the Second World War, and of those who risked all to help them. 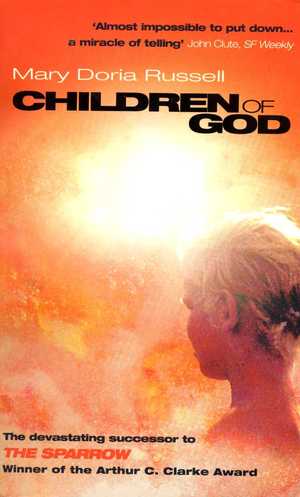 Mary Doria Russell - Children ​of God
Mary ​Doria Russell's debut novel, _The Sparrow,_ took us on a journey to a distant planet and into the center of the human soul. A critically acclaimed bestseller, _The Sparrow_ was chosen as one of _Entertainment Weekly_'s Ten Best Books of the Year, a finalist for the Book-of-the-Month Club's First Fiction Prize and the winner of the James M. Tiptree Memorial Award. Now, in _Children of God,_ Russell further establishes herself as one of the most innovative, entertaining and philosophically provocative novelists writing today. The only member of the original mission to the planet Rakhat to return to Earth, Father Emilio Sandoz has barely begun to recover from his ordeal when the Society of Jesus calls upon him for help in preparing for another mission to Alpha Centauri. Despite his objections and fear, he cannot escape his past or the future. Old friends, new discoveries and difficult questions await Emilio as he struggles for inner peace and understanding in a moral universe whose boundaries now extend beyond the solar system and whose future lies with children born in a faraway place. Strikingly original, richly plotted, replete with memorable characters and filled with humanity and humor, _Children of God_ is an unforgettable and uplifting novel that is a potent successor to _The Sparrow_ and a startlingly imaginative adventure for newcomers to Mary Doria Russell's special literary magic. 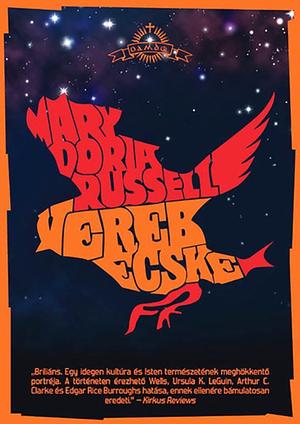