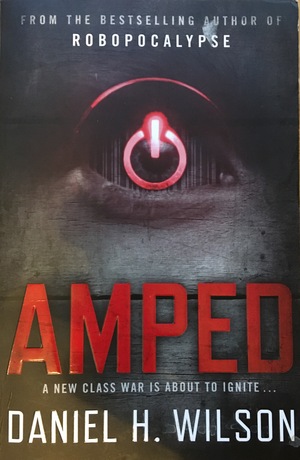 Daniel H. Wilson - Amped
What is in Owen Gray's head ... and who is trying to kill him for it? Twenty-nine-year-old Owen Gray always believed the miraculous device in his brain had been implanted for purely medical reasons, as a way of controlling the debilitating seizures he suffered in his youth. But when the Supreme Court rules that "amplified" humans like Owen are not protected by the same basic laws as pure humans, his world instantly fractures. As society begins to unravel and a new class war is ignited by fear, Owen's father, a doctor who originally implanted the "amp", confides something that will send him on a harrowing journey - his "amp" has hidden potential to do so much more than he imagined ... and he is now in grave danger. All roads lead to a dusty community in rural Oklahoma, where Owen must find the one man who can explain what is really in his head. There he also meets Lyle Crosby, a dangerous and unpredictable leader of the fast-growing "amp" movement, someone whose stunning physical abilities and ruthless ideas show Owen how to harness his own startling gifts - but threaten to draw him into a world from which there may be no moral return. 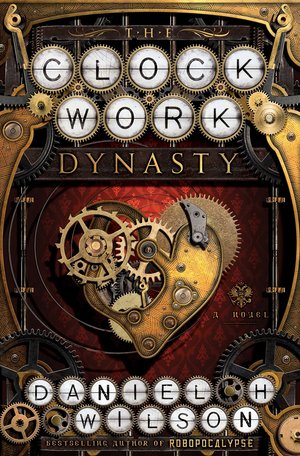 Daniel H. Wilson - The ​Clockwork Dynasty
An ​ingenious new thriller that weaves a path through history, following a race of human-like machines that have been hiding among us for untold centuries, written by the New York Times bestselling author of Robopocalypse. Present day: When a young anthropologist specializing in ancient technology uncovers a terrible secret concealed in the workings of a three-hundred-year-old mechanical doll, she is thrown into a hidden world that lurks just under the surface of our own. With her career and her life at stake, June Stefanov will ally with a remarkable traveler who exposes her to a reality she never imagined, as they embark on an around-the-world adventure and discover breathtaking secrets of the past... Russia, 1725: In the depths of the Kremlin, the tsar's loyal mechanician brings to life two astonishingly humanlike mechanical beings. Peter and Elena are a brother and sister fallen out of time, possessed with uncanny power, and destined to serve great empires. Struggling to blend into pre-Victorian society, they are pulled into a legendary war that has raged for centuries. The Clockwork Dynasty seamlessly interweaves past and present, exploring a race of beings designed to live by ironclad principles, yet constantly searching for meaning. As June plunges deeper into their world, her choices will ultimately determine their survival or extermination. Richly-imagined and heart-pounding, Daniel H. Wilson's novel expertly draws on his robotics and science background, combining exquisitely drawn characters with visionary technology--and riveting action. 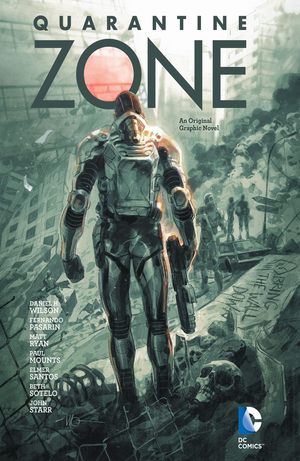 Daniel H. Wilson - Quarantine ​Zone
Humanity ​has discovered the root of all evil: the Malnoro virus—a devastating malady that modifies the neural pathways for empathy. Those infected have been forcibly imprisoned in the Quarantine Zone (whether they choose to do good or evil). Meanwhile, the rest of the cured world is sterile and crime-free, but permeated by an oppressive, paranoid fear of new outbreaks. If we could "cure" ourselves of the capability to do evil, should we? And could a person truly be good without the choice to do evil? New York Times best-selling author Daniel H. Wilson delivers a thrilling sci-fi series that raises hard questions about free will and the nature of good and evil. 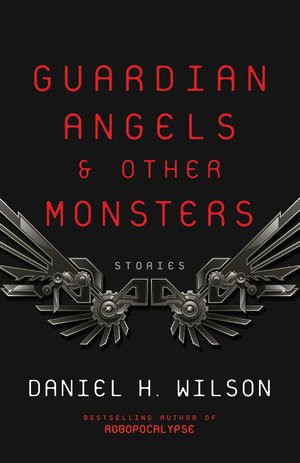 Daniel H. Wilson - Guardian ​Angels and Other Monsters
In ​"All Kinds of Proof," a down-and-out drunk makes the unlikeliest of friends when he is hired to train a mail-carrying robot; in "Blood Memory," a mother confronts the dangerous reality that her daughter will never assimilate in this world after she was the first child born through a teleportation device; in "The Blue Afternoon That Lasted Forever," a physicist rushes home to be with his daughter after he hears reports of an atmospheric anomaly which he knows to be a sign of the end of the earth; in "Miss Gloria," a robot comes back to life in many different forms in a quest to save a young girl. Guardian Angels and Other Monsters displays the depth and breadth of Daniel H. Wilson's vision and examines how artificial intelligence both saves and destroys humanity. 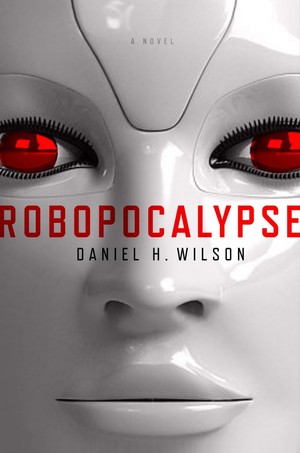 Daniel H. Wilson - Robopocalypse
In ​this terrifying tale of humanity’s desperate stand against a robot uprising, Daniel H. Wilson has written the most entertaining sci-fi thriller in years. Not far into our future, the dazzling technology that runs our world turns against us. Controlled by a childlike—yet massively powerful—artificial intelligence known as Archos, the global network of machines on which our world has grown dependent suddenly becomes an implacable, deadly foe. At Zero Hour—the moment the robots attack—the human race is almost annihilated, but as its scattered remnants regroup, humanity for the first time unites in a determined effort to fight back. This is the oral history of that conflict, told by an international cast of survivors who experienced this long and bloody confrontation with the machines. Brilliantly conceived and amazingly detailed, Robopocalypse is an action-packed epic with chilling implications about the real technology that surrounds us. 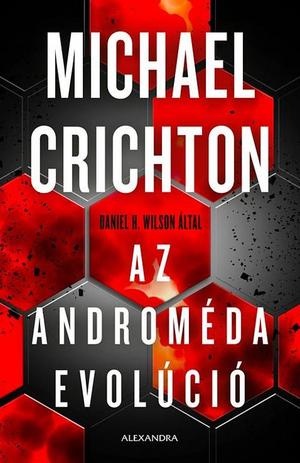 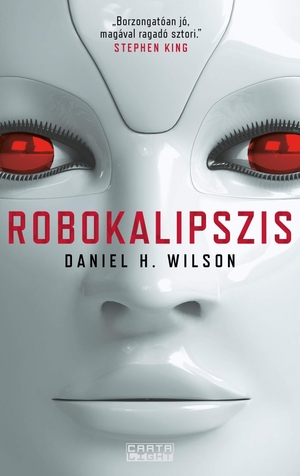 How ​To Survive a Robot Uprising Daniel H. Wilson
2

Daniel H. Wilson - How ​To Survive a Robot Uprising
An ​inspired and hilarious look at how humans can defeat the inevitable robot rebellion—as revealed by a robotics expert. How do you spot a robot mimicking a human? How do you recognize and then deactivate a rebel servant robot? How do you escape a murderous “smart” house, or evade a swarm of marauding robotic flies? In this dryly hilarious survival guide, roboticist Daniel H. Wilson teaches worried humans the keys to quashing a robot mutiny. From treating laser wounds to fooling face and speech recognition, besting robot logic to engaging in hand-to-pincer combat, How to Survive a Robot Uprising covers every possible doomsday scenario facing the newest endangered species: humans. And with its thorough overview of current robot prototypes—including giant walkers, insect, gecko, and snake robots— How to Survive a Robot Uprising is also a witty yet legitimate introduction to contemporary robotics. Full of cool illustrations, and referencing some of the most famous robots in pop-culture, How to Survive a Robot Uprising is a one-of-a-kind book that is sure to be a hit with all ages. 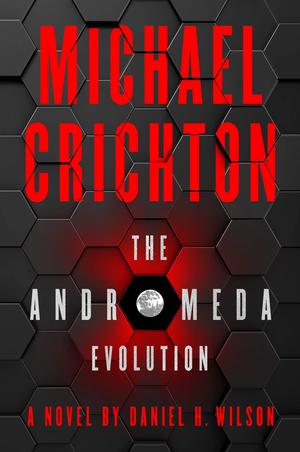 Michael Crichton - Daniel H. Wilson - The ​Andromeda Evolution
The ​Evolution is Coming. In 1967, an extraterrestrial microbe came crashing down to Earth and nearly ended the human race. Accidental exposure to the particle—designated The Andromeda Strain—killed every resident of the town of Piedmont, Arizona, save for an elderly man and an infant boy. Over the next five days, a team of top scientists assigned to Project Wildfire worked valiantly to save the world from an epidemic of unimaginable proportions. In the moments before a catastrophic nuclear detonation, they succeeded. In the ensuing decades, research on the microparticle continued. And the world thought it was safe… Deep inside Fairchild Air Force Base, Project Eternal Vigilance has continued to watch and wait for the Andromeda Strain to reappear. On the verge of being shut down, the project has registered no activity—until now. A Brazilian terrain-mapping drone has detected a bizarre anomaly of otherworldly matter in the middle of the jungle, and, worse yet, the tell-tale chemical signature of the deadly microparticle. With this shocking discovery, the next-generation Project Wildfire is activated, and a diverse team of experts hailing from all over the world is dispatched to investigate the potentially apocalyptic threat. But the microbe is growing—evolving. And if the Wildfire team can’t reach the quarantine zone, enter the anomaly, and figure out how to stop it, this new Andromeda Evolution will annihilate all life as we know it. 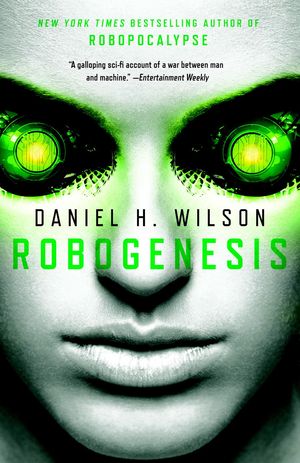 Daniel H. Wilson - Robogenesis
"The ​machine is still out there. Still alive." Humankind had triumphed over the machines. At the end of Robopocalypse, the modern world was largely devastated, humankind was pressed to the point of annihilation, and the earth was left in tatters . . . but the master artificial intelligence presence known as Archos had been killed. In Robogenesis, we see that Archos has survived. Spread across the far reaches of the world, the machine code has fragmented into millions of pieces, hiding and regrouping. In a series of riveting narratives, Robogenesis explores the fates of characters new and old, robotic and human, as they fight to build a new world in the wake of a devastating war. Readers will bear witness as survivors find one another, form into groups, and react to a drastically different (and deadly) technological landscape. All the while, the remnants of Archos's shattered intelligence are seeping deeper into new breeds of machines, mounting a war that will not allow for humans to win again. Daniel H. Wilson makes a triumphant return to the apocalyptic world he created, for an action-filled, raucous, very smart thrill ride about humanity and technology pushed to the tipping point. 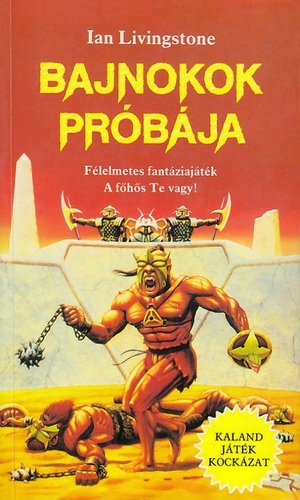