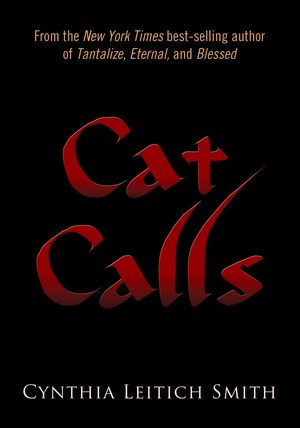 Cynthia Leitich Smith - Cat ​Calls
Tiffany's ​grandmother sees something wild in her future -- but is 16-year-old Tiffany prepared for the powerful shape it will take? When she takes over her grandmother’s fortune telling booth for a day, some really strange things happen… CAT CALLS is a short story by New York Times Bestseller Cynthia Leitich Smith -- set in the same dark universe as her novels Tantalize, Eternal, and Blessed 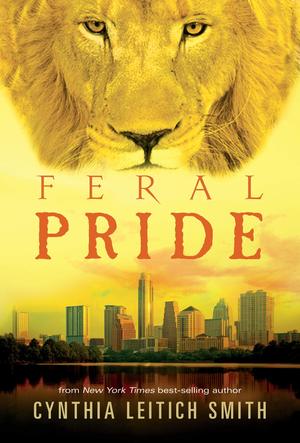 Cynthia Leitich Smith - Feral ​Pride
The ​explosive finale to the Feral series by New York Times best-selling author Cynthia Leitich Smith. Anti-shifter sentiment is at an all-time high when Kayla’s transformation to werecat is captured on video and uploaded for the world to see. Suddenly she becomes a symbol of the werebeast threat and—along with fellow cat Yoshi, lion-possum Clyde, and human Aimee—a hunted fugitive. Meanwhile, a self-proclaimed weresnake has kidnapped the governor of Texas and hit the airwaves with a message of war. In retaliation, werepeople are targeted by law enforcement, threatened with a shift-suppressing vaccine, terrorized by corporate conspiracy, and enslaved by a top-secret, intelligent Cryptid species. Can Clyde rally his inner lion king to lead his friends—new and old—into battle against ruthless, media-savvy foes? A rousing blend of suspense, paranormal romance, humor, and high action. 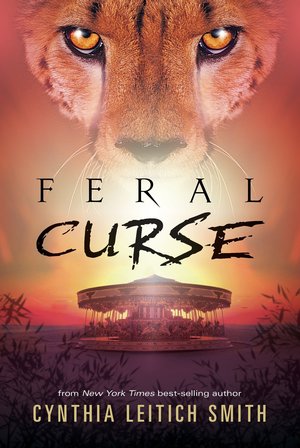 Cynthia Leitich Smith - Feral ​Curse
The ​second installment of New York Times best-selling author Cynthia Leitich Smith’s thrilling Feral series delivers danger, romance, and suspense in an all new action-packed adventure. The adopted daughter of two respectable human parents, Kayla is a werecat in the closet. All she knows is the human world. When she comes out to her boyfriend, tragedy ensues, and her determination to know and embrace her heritage grows. Help appears in the lithe form of sexy male werecat Yoshi, backed up by Aimee and Clyde, as the four set out to solve the mystery of a possessed antique carousel while fielding miscast magic, obsessive strangers, and mounting species intolerance. Paranormal fans will go wild for this rousing second Feral adventure. 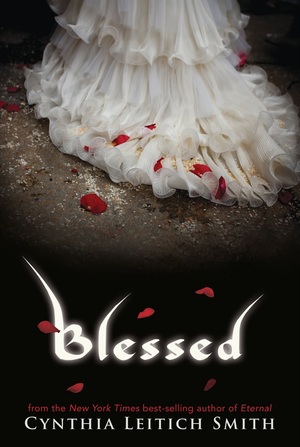 Cynthia Leitich Smith - Blessed
With ​a wink and a nod to Bram Stoker, bestselling author Cynthia Leitich Smith unites the casts of Tantalize and Eternal in a delicious dark fantasy her fans will devour. Quincie Morris, teen restaurateur and neophyte vampire, is in the fight of her life — or undeath. Even as she adjusts to her new appetites, she must clear her best friend and true love, the hybrid-werewolf Kieren, of murder charges; thwart the apocalyptic ambitions of Bradley Sanguini, the seductive vampire-chef who “blessed” her; and keep her dead parents’ restaurant up and running. She hires a more homespun chef and adds the preternaturally beautiful Zachary to her wait staff. But with hundreds of new vampires on the rise and Bradley off assuming the powers of Dracula Prime, Zachary soon reveals his true nature — and his flaming sword — and they hit the road to staunch the bloodshed before it’s too late. Even if they save the world, will there be time left to salvage Quincie’s soul? 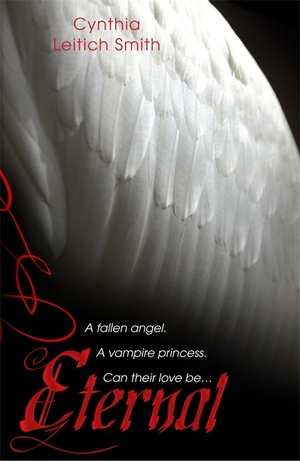 Cynthia Leitich Smith - Eternal
At ​last, Miranda is the life of the party: all she had to do was die. Elevated by none other than the King of the Mantle of Dracul, she goes from high-school theater wannabe to glamorous fiend overnight. Meanwhile, her guardian angel, Zachary, demoted to human guise as her personal assistant, has his hands full saving his girl’s soul while planning a fast-approaching Death Day gala. In alternating viewpoints, Miranda and Zachary navigate a cut-throat aristocracy as they play out a dangerous, diabolically witty love story for the ages. 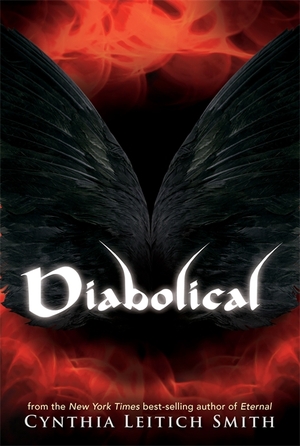 Cynthia Leitich Smith - Diabolical
Tantalize ​4 Prepare for a hell of a ride as Cynthia Leitich Smith calls on characters from her previous novels - and conjures up new ones - for a climactic showdown. When "slipped" angel Zachary and his werewolf pal, Kieren, arrive under suspicious circumstances to a mysterious New England boarding school, they quickly find themselves in a hellish lockdown with an intriguing assortment of secretive, hand-picked students. Plagued by demon dogs, hallucinatory wall décor, a sadistic instructor, and a legendary fire-breathing monster, will they somehow manage to escape? Or will the devil have his due? Best-selling author Cynthia Leitich Smith unites heroes from the previous three novels in the Tantalize Series - including Zachary's girl, Miranda, and Kieren's love, Quincie - along with a fascinating cast of all-new characters for a suspenseful, action-packed clash between the forces of heaven and hell. 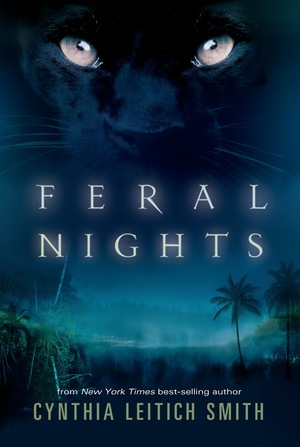 Cynthia Leitich Smith - Feral ​Nights
Fans ​of the Tantalize quartet will thrill to see werepossum Clyde and other favorite secondary characters — plus all-new ones — take to the fore in book one of an all-new series. When sexy, free-spirited werecat Yoshi tracks his sister, Ruby, to Austin, he discovers that she is not only MIA, but also the key suspect in a murder investigation. Meanwhile, werepossum Clyde and human Aimee have set out to do a little detective work of their own, sworn to avenge the brutal killing of werearmadillo pal Travis. When all three seekers are snared in an underground kidnapping ring, they end up on a remote island inhabited by an unusual (even by shifter standards) species and its cult of worshippers. Their hosts harbor a grim secret: staging high-profile safaris for wealthy patrons with evil pedigrees, which means that at least one newcomer to the island is about to be hunted. As both wereprey and werepredator fight to stay alive, it’s up to mild-mannered Clyde — a perennial sidekick — to summon the hero within. Can he surprise even himself? 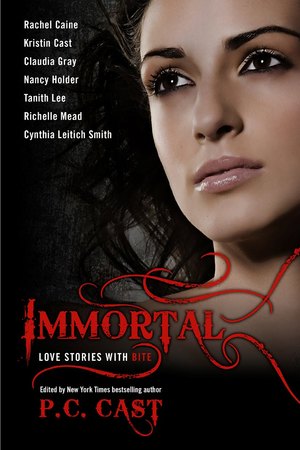 Rachel Vincent - Richelle Mead - Rachel Caine - Cynthia Leitich Smith - Claudia Gray - Nancy Holder - Kristin Cast - Immortal
In ​Immortal: Love Stories With Bite, edited by New York Times bestselling author of the House of Night series P.C. Cast, seven of today’s most popular YA vampire and contemporary fantasy authors offer new short stories that prove when you’re immortal, true love really is forever. Rachel Caine (the Morganville Vampires series) revisits the setting of her popular series, where the vampires are in charge and love is a risky endeavor, even when it comes to your own family. Cynthia Leitich Smith (Tantalize) gives us a love triangle between a vampire, a ghost and a human girl, in which none of them are who or what they seem. Claudia Gray (Evernight) takes us into the world of her Evernight series, in which a pre–Civil War courtesan-to-be is courted by a pale, fair-haired man whose attentions are too dangerous to spurn, in more ways than one. Richelle Mead (the Vampire Academy series) brings us the tale of a young vampire on the run from the rest of her kind, and the human boy who provides the getaway car, as well as a reason to keep running. Nancy Holder (the Wicked series, “Buffy the Vampire Slayer”) immerses us in a post-apocalyptic New York where two best friends are forced to make a choice that may kill them both. Kristin Cast (the House of Night series) introduces us to a new kind of vampire: one with roots in Greek mythology, and the power to alter space and time to save the girl he's meant to love. Rachel Vincent (the Soul Screamers series) explores a new corner of her series with the story of aleanan sidhe capable of inspiring the musician she loves to new creative heights, or draining him, and his talent, dry. And Tanith Lee (Black Unicorn) shows us what happens when a bright young woman with some supernatural savvy encounters a misguided (but gorgeous) young vampire. 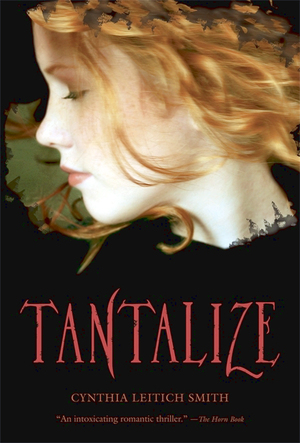 Cynthia Leitich Smith - Tantalize
Quincie ​Morris has never felt more alone. Her parents are dead, and her hybrid-werewolf first love is threatening to embark on a rite of passage that will separate them forever. Then, as she and her uncle are about to unveil their hot vampire-themed restaurant, a brutal murder leaves them scrambling for a chef. Can Quincie transform their new hire into a culinary Dark Lord before opening night? Can he wow the crowd in his fake fangs, cheap cape, and red contact lenses — or is there more to this earnest face than meets the eye? As human and preternatural forces clash, a deadly love triangle forms, and the line between predator and prey begins to blur. Who’s playing whom? And how long can Quincie play along before she loses everything? TANTALIZE marks Cynthia Leitich Smith’s delicious debut as a preeminent author of dark fantasy. 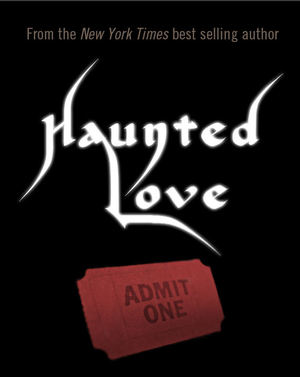 Cynthia Leitich Smith - Haunted ​Love
Spirit, ​Texas, is a town of secrets, and as the new owner of the local haunted movie theater, Cody Stryker is juggling more than his fair share. When a mysterious new girl comes to town and runs afoul of the ghost that lives in his theater, Cody’s caught in the middle and needs to figure out exactly who he can trust. HAUNTED LOVE is a short story by New York Times Bestseller Cynthia Leitich Smith -- set in the same dark universe as her novels TANTALIZE, ETERNAL, and BLESSED. This story includes a sneak preview of Cynthia Leitich Smith’s latest novel, DIABOLICAL, which unites characters from the previous three novels in the Tantalize Series along with a fascinating cast of all-new characters for a suspenseful, action-packed clash between the forces of heaven and hell. 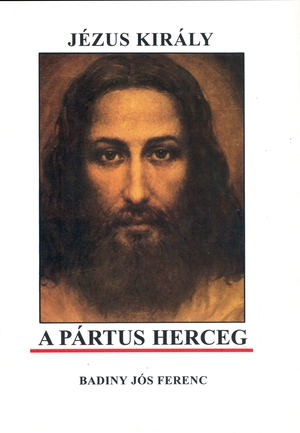