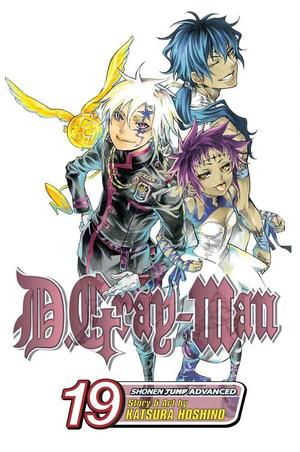 Katsura Hoshino - D.Gray-Man ​19.
Following ​a brutal battle with a Level 4 akuma, Allen seems to be undergoing an odd and disturbing change. Meanwhile, a new breed of Exorcist is introduced at Black Order headquarters and, at Asia Branch, Kanda learns some disturbing things about his own status in the Black Order's Exorcist operations. Needless to say, Allen and his friends are ill prepared to deal with the simultaneous appearance of the servants of the Millennium Earl all over the world! 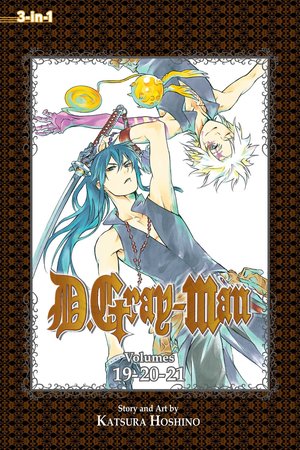 Katsura Hoshino - D.Gray-man ​19-21.
D.Gray-man ​is the story of Allen Walker, who roams a fictional 19th century Earth in search of Innocence, a mysterious substance used to fight demons called akuma. The Millennium Earl and the Noah attack the North American Branch of the Black Order. During the battle Allen is able to see into Yu Kanda’s past and learns the shocking truth about Kanda—and himself! 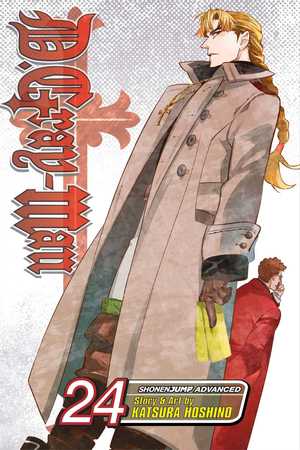 Katsura Hoshino - D.Gray-Man ​24.
Set ​in a fictional 19th century England, D.Gray-man is the story of Allen Walker, a 15-year-old boy who roams the earth in search of Innocence. Washed away to unknown parts of the world after The Great Flood, Innocence is the mysterious substance used to create weapons that obliterate demons known as akuma. Allen, now joined by two companions, is still on the run and trying to deal with his demonic alter ego, the Fourteenth. This means avoiding erstwhile allies as well as overt enemies. He also has to prevent one of his companions, fellow Exorcist Kanda, from trying to destroy the Fourteenth while keeping the Fourteenth from destroying his other companion, Johnny, whose zealous devotion to Allen is gratifying but not much help in a fight! Katsura Hoshino - D.Gray-Man ​25.
A ​cursed teenage boy saves mankind one soul at a time. Set in a fictional 19th century England, D.Gray-man is the story of Allen Walker, a boy who roams the earth in search of Innocence. Washed away to unknown parts of the world after The Great Flood, Innocence is the mysterious substance used to create weapons that obliterate demons known as akuma. After a savage battle, Allen and the Millennium Earl, leader of the akuma, confront each other not as themselves but as mysterious entities that came into being as seeming twin brothers during an even more mysterious episode in the Earl’s past. Nea, the twin inhabiting Allen, has a mission: to destroy Mana, the one inhabiting the Earl. But then some of Allen’s erstwhile allies in the battle against the akuma show up at exactly the wrong moment—for them! 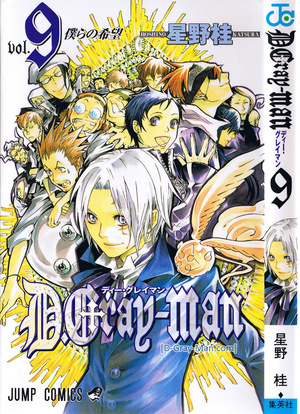 Katsura Hoshino - D.Gray-Man ​9.
Hordes ​of akuma are arriving in Edo to join the Earl, who has found a nefarious use for one of the greatest of all Biblical artifacts. Meanwhile, one akuma has invaded the Asian Branch of the Dark Order to take care of Allen once and for all. Allen doesn't appear to stand a chance, but the very nature of the akuma's attack starts something no one could have anticipated! 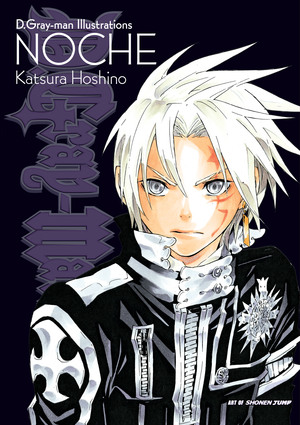 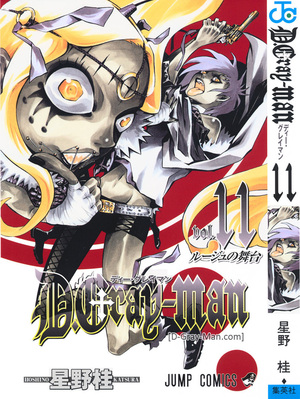 Katsura Hoshino - D.Gray-Man ​11.
With ​Allen Walker once more in their ranks, the Exorcists soldier into the fabled Ark of Noah. In almost no time they encounter opposition in the form of two young Noah possessing startling powers. The Noah, however, seem less interested in the grand plans of the Millennium Earl than in collecting payment on yet another mountain of debt accrued by Allen's master, General Cross Marian. Can the Exorcists find the literal key out of this potentially lethal predicament? 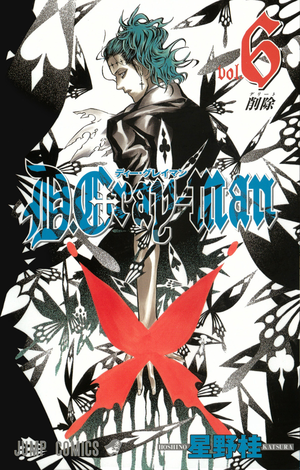 Katsura Hoshino - D.Gray-Man ​6.
A ​horde of akuma is closing in on Allen, but instead of attacking him they mysteriously head right for another exorcist - Suman Dark! His tragic story and the secret of his unique Innocence are revealed, but in the process Suman's life is threatened. Allen tries his best to save his comrade by putting himself in grave danger! 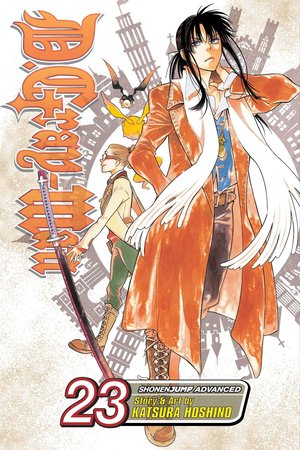 Katsura Hoshino - D.Gray-Man ​23.
Allen ​has been revealed to be the embodiment of one of a special class of demons known as the Noah, but some of his friends don’t want to believe he’d really go over to their side. Finding Allen and getting him to clear up the matter, however, proves to be a difficult and extremely dangerous proposition! 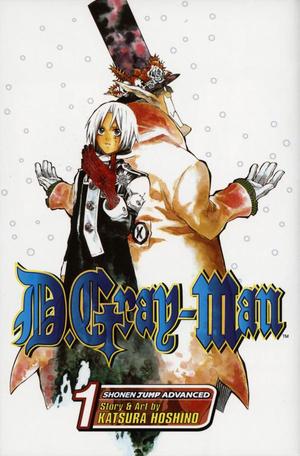 Katsura Hoshino - D.Gray-Man ​1.
Set ​in a fictional end of the 19th century England, the story revolves around a teenage boy named Allen Walker who is cursed with a cross mark on his hand that turns his arm into an enormous weapon, which he uses to hunt down and kill akumas. An akuma, generated by a 1,000-year-old phantom, is implanted into a human's soul during a moment of devastation and despair. The phantom uses the demons to then carry out his goal: destroy all humankind. 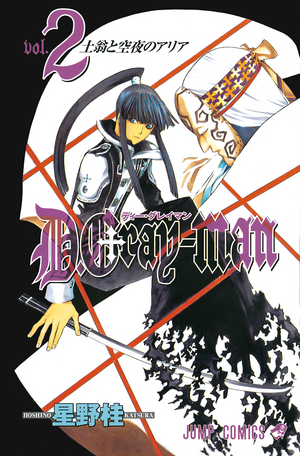 Katsura Hoshino - D.Gray-Man ​2.
Teen ​exorcist Allen Walker is given his first assignment, and his perilous mission takes him to southern Italy, where an Innocence has been located. Along with fellow exorcist Kanda, and Tom, a "finder" - one of a support group for exorcists - Allen must vanquish the akuma that covets the Innocence. 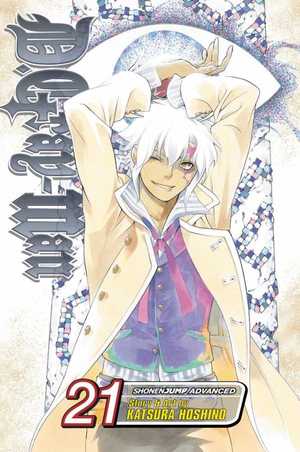 Katsura Hoshino - D.Gray-Man ​21.
Allen ​has been dropped into a flashback of his surly colleague Yu Kanda's past, where a parade of disturbing secrets reveal themselves--including one that could at long last explain what makes Yu tick! 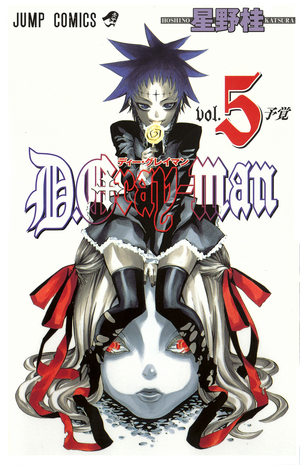 Katsura Hoshino - D.Gray-Man ​5
The ​battle against Arystar Krory and Eliade continues. With Allen's eye once again healed and operational, the truth begins to be revealed. Allen's companion Rabi realizes that Arystar may not actually be a vampire, but something else entirely. By the end of the battle at Crowley Castle, Allen and Rabi find themselves with an unexpected companion for their journey. 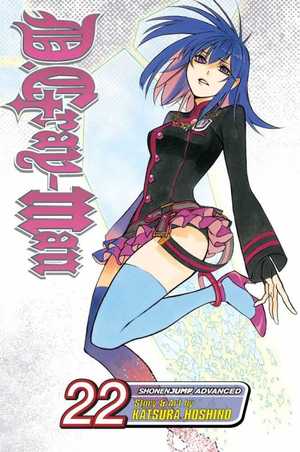 Katsura Hoshino - D.Gray-Man ​22.
Struggling ​with mounting turmoil over his own identity, Allen meets The Cardinal. Who is he? What is he? Why is he interested in Allen? The answers are startling, and arrive with a vision that shocks the young demon fighter to the core! Katsura Hoshino - D.Gray-Man ​16.
Lenalee ​is determined to confront a Level Four Akuma that's out to kill Komui, but her only chance is to reclaim her Innocence and synchronize with it. The Level Four is not inclined to wait around and pursues its mission even against the best efforts of Lavi and Kanda. It's left to Allen to hold the line, but it soon becomes obvious he has no hope of doing it all by himself! 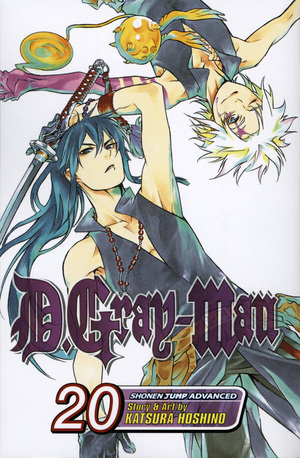 Katsura Hoshino - D.Gray-Man ​20.
Set ​in a fictional 19th century England, D.Gray-man is the story of Allen Walker, a 15-year-old boy who roams the earth in search of Innocence. Washed away to unknown parts of the world after The Great Flood, Innocence is the mysterious substance used to create weapons that obliterate demons known as akuma. 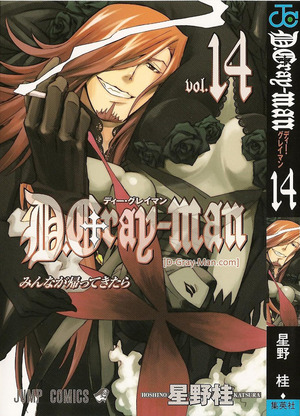 Katsura Hoshino - D.Gray-Man ​14.
Cross ​Marian is about to finish off Tyki Mikk when the Millennium Earl barges in, spreading chaos and destruction in every direction! The Earl's plan to build a new Ark using data downloads from the old one seems unstoppable, until Allen encounters a strange apparition that tells him to play the piano. Allen would be more than happy to oblige, but there's one slight problem--he never learned how! 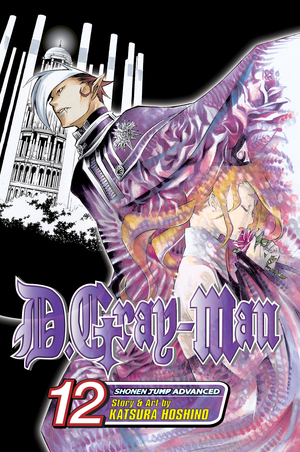 Katsura Hoshino - D.Gray-Man ​12.
Fight ​to the Debt! Krory, trapped with seemingly no hope of escape, receives a visitation from the last person he thought he would ever see again. Allen reluctantly agrees, unaware that Lavi is feverishly mulling over mounting evidence that Innocence is far more, and far stranger, than anyone had previously imagined! 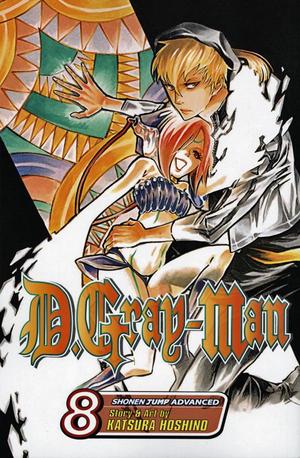 Katsura Hoshino - D.Gray-Man ​8.
The ​battle on the sea continues, with the swarm of evolved akuma pressing hard on the Exorcists. Lenalee tries to tackle one akuma on her own, but realizes she can prevail only by unleashing the full force of her Innocence. Back on the ship Lavi prepares to call on a special attribute of his own Innocence. Will any of this be enough? Katsura Hoshino - D.Gray-man ​22-24.
D.Gray-man ​is the story of Allen Walker, who roams a fictional 19th century Earth in search of Innocence, a mysterious substance used to fight demons called akuma. Allen struggles as the Fourteenth—the mysterious Noah inside him—begins to awaken. When an independent-type Innocence tries to fuse with Allen, the Black Order determines Allen to be one of the Noah! 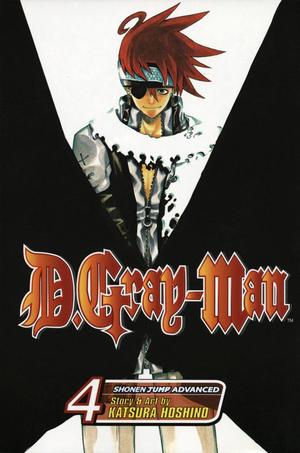 Katsura Hoshino - D.Gray-Man ​4
Allen ​starts to question the Black Ministry about the "Clan of Noah" and the reason he became an Exorcist. With his left eye injured and incapable of detecting akuma, he has come to understand the constant fear of not knowing whether the person he is talking to is truly human! Despite his confusion, Allen is sent on a mission to seek out his master, Cross, one of the Marshals of the Black Ministry, and find out why the akuma have suddenly started targeting leaders of the Ministry. 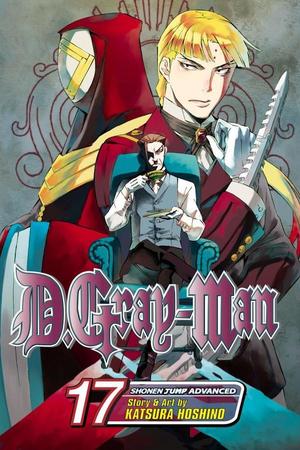 Katsura Hoshino - D.Gray-Man ​17.
An ​experimental virus is turning members of the Black Order into zombies! Even Count Krory is infected, driving him to attack Allen and Lavi. It's up to Komui, creator of the virus, to deal with this disaster, but though he knows how to stop it he literally doesn't know where to start. Can he figure it out while also contending with a vengeful spirit eager to see the virus complete its rampage? 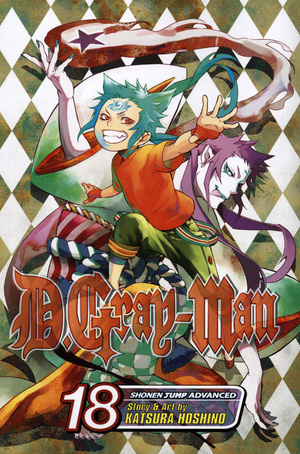 Katsura Hoshino - D.Gray-Man ​18.
It's ​been three months since Allen Walker's mentor, Cross Marian, pulled his latest disappearing act. Allen and fellow exorcist Kanda now learn of an odd new threat known only as G. G plans to steal a valuable crown from the Louvre, so Allen and Kanda join the local constabulary in trying to prevent the theft. This leads to a surprise discovery that could have no small significance for the future of the Black Order! 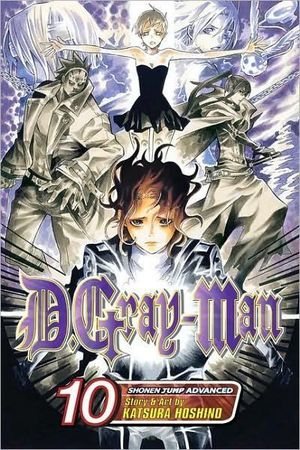 Katsura Hoshino - D.Gray-Man ​10.
Hopelessly ​outnumbered by the Millennium Earl's forces, Lenalee, Lavi, and the rest of the survivors aboard Anita's ship face almost certain annihilation. Then, as if determined to make sure of it, the Noah enter the fray! But the harried agents of the Black Order refuse to throw in the towel, knowing this may be the last stand of the Exorcists. If any hope remains, it could reside with Allen Walker - but no one knows if they'll ever see him again! 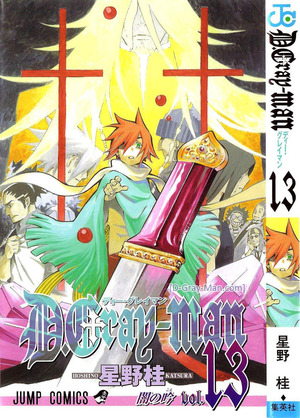 Katsura Hoshino - D.Gray-Man ​13.
Allen ​is presented with a stark choice- if he wishes to rescue Lenalee and Chaoji, he must destroy his friend Lavi! Allen refuses to do it, little realizing that the choice is not what it seems. Lavi knows what's up and may be the only person who can turn the tables on Road. Has Road, however, destroyed Lavi's will to resist? Katsura Hoshino - D.Gray-Man ​7.
Allen ​has disappeared. Lavi and Lenalee rush to find him, only to wind up confronting a horde of akuma pursuing Allen's golem Timcanpy. After dealing with this they are ordered to continue their mission without Allen. Is his place to be taken by a new exorcist, Miranda Lotto. Allen, meanwhile, wakes up inside the Asian Branch of the Black Ministry to the sobering reality that he has lost his Innocence! 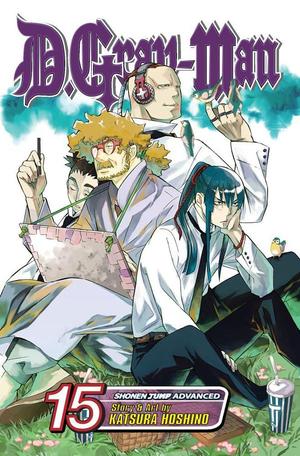 Katsura Hoshino - D.Gray-Man ​15.
A ​Noah called Lulu Bell leads an army of Akuma against the exorcists in order to retrieve the Egg, a device that will enable the Millenium Earl to activate his new Ark. With most of the surviving exorcists incapacitated, it's up to Allen and Bookman to try to stop the Akuma from making off with the Egg. But when the Akuma try to make off with Allen as well, all Hell really breaks loose! 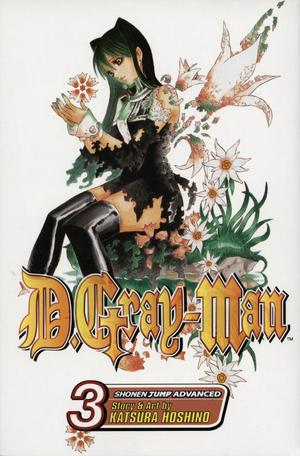 Katsura Hoshino - D.Gray-Man ​3.
Allen ​and Lenalee are sent on a mission to a city where time has stood still, a place where the townsfolk forget that every day is the same day repeating itself. Strangely enough, a woman named Miranda is the only one unaffected by the time warp. Would it have anything to do with her being fired from her job for the hundredth time?