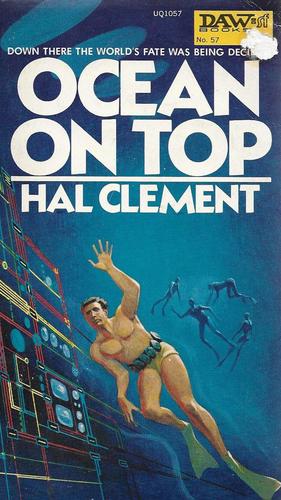 Hal Clement - Ocean ​on Top
Aquatic ​Enigma - The world's energy was limited... and with overpopulation and a high level of technology, the Power Board had virtually become the real government of the world. Power was rationed, it was guarded, it was sacred. Thus when three of the Power Board's agents disappeared at sea, and there was evidence that something irregular was happening to the energy quota in that area, it was cause for real alarm. 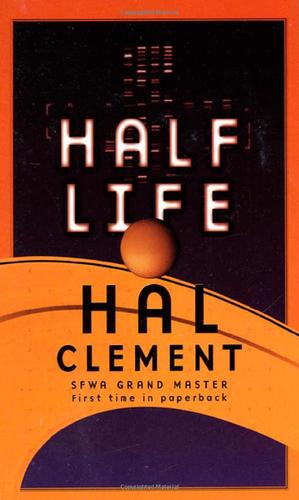 Hal Clement - Half ​life
In ​about two hundred years, the human race on Earth is perhaps facing extinction due to the rapid evolution of disease. A crew of young men and women travel to the moons of Saturn, to Titan, to investigate the biochemistry of the pre-life conditions there in the slim hope of discovering something that might save Earth. The whole story runs at high-speed, as they race to find answers across the surface of an alien landscape with death close behind . . . and gaining. 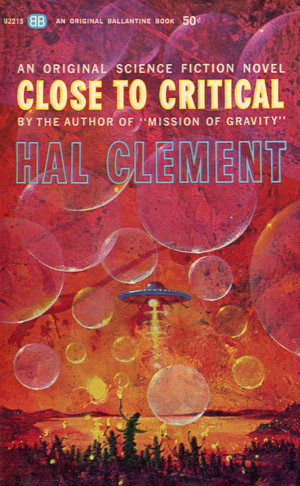 Hal Clement - Close ​to Critical
Shrouded ​in eternal gloom by its own thick atmosphere Tenebra was a hostile planet...a place of crushing gravity, 370-degree temperatures, a constantly shifting crust and giant drifting raindrops. Unpromising - yet there was life, intelligent life on Tenebra. For more than 20 years, Earth scientists had studied the natives from an orbiting laboratory...and had even found a way to train and educate a few of them. Then the unexpected happened! A young Earth girl and the son of a powerful, hot-tempered alien diplomat were marooned in a bathyscape, drifting toward the planet's deadly surface. Only the primitive Tenebrans could rescue them! 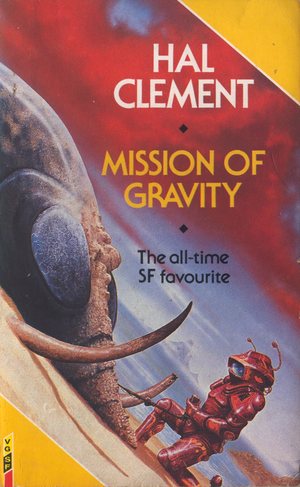 Hal Clement - Mission ​of Gravity
Mesklin ​is a vast, inhospitable, disc-shaped planet, so cold that its oceans are liquid methane and its snows are frozen ammonia. It is a world spinning dizzyingly, a world where gravity can be a crushing 700 times greater than Earth's, a world too hostile for human explorers. But the planet holds secrets of inestimable value, and an unmanned probe that has crashed close to one of its poles must be recovered. Only the Mesklinites, the small creatures so bizarrely adapted to their harsh environment can help. And so Barlennan, the resourceful and courageous captain of the Mesklinite ship Bree, sets out on an heroic and appalling journey into the terrible unknown... 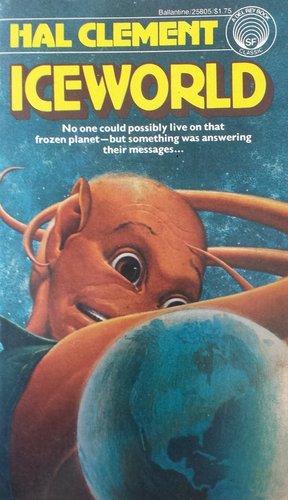 Hal Clement - Iceworld
Mottled ​with sinister colors, the planet gleamed in the spacecraft's viewport. Sallman Ken could not believe that such a bleak and icy globe could ever have produced intelligent life. Yet the expedition had contacted natives of some sort when it sent in unmanned landers. More important, smugglers from his own planet had begun trading with the natives of that Iceworld for a new and virulent narcotic...the most dangerous drug ever to come into their universe. Now Sallman Ken wondered what manner of creature could exist on a planet so cold that sulfur was a solid, not a gas, and water actually existed as a liquid. But he wouldn't wonder for long, for Ken had to find a way onto the surface of that planet so he could locate the source of that deadly drug. 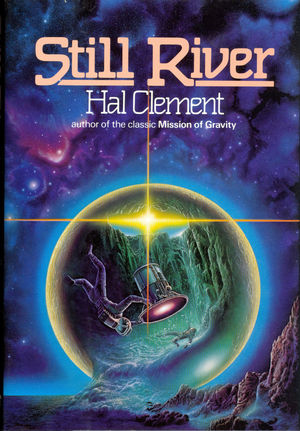 Hal Clement - Still ​River
Five ​student scientist, all of different species had one final program of fieldwork to complete before they could graduate. They were to study a tiny planet called Enigma. Suddenly, their mapping robots were disappearing. The Human went looking, only to disappear into a fissure. Her companions followed, deep into a labyrinth of caves and tunnels, and discovered life - where none should be. 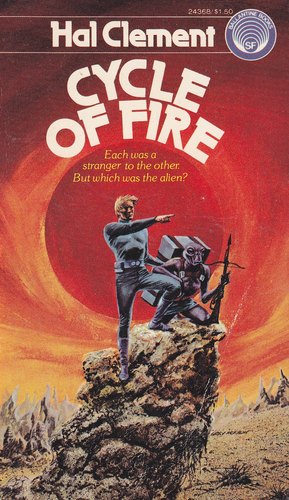 Hal Clement - Cycle ​of Fire
After ​his ship crashed on the inhospitable planet Abyorman, Nils Kruger had spent weeks wandering across the face of the planet.suffering from blistering heat, the searing cold of an alien climate. Now he had found a fellow wanderer, Dar, an alien castaway. They may both die. The human opts to do something about it. Dar, who knows the time of his death in advance, opts to do nothing. Which of them is right? Perhaps both? 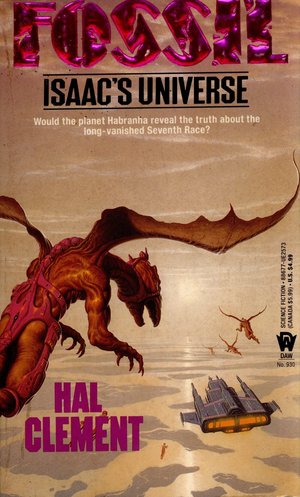 Hal Clement - Fossil
Set ​in a niverse created by Isaac Asimov and written by science fiction master Hal CLement, this is the story of six vastly different star faring races struggling to coexist as they combine their forces for a scientific project on the inhospitable world of Habranha. Their mission is to search through the planet's ice layers for fossils which they hope will determine whether the winged natives, the Habras, actually evolved there or are--as some evidence indicates--descendants of the long-vanished, legendary Seventh Race. But there are those among the Six Races who seem to have secret agendas of their own. And when a ground vehicle turns up at the research settlement with no one aboard except a long-dead Habra frozen in a block of ice, humans Hugh and Janice Cedar and their allies among the Six Races are determined to get to the root of this mystery. Has someone sent them a fully preserved fossil, a long-buried ancestor of the present-day Habras? Or is this an elaborate hoax being staged to put an end to their study before they can unearth the truth about the planet and its people? 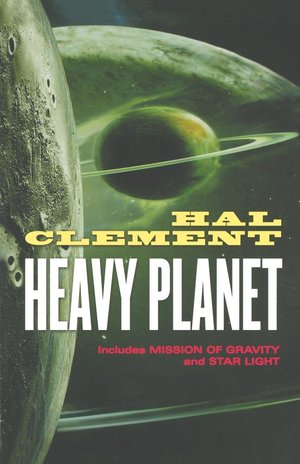 Hal Clement - Heavy ​Planet
Discover ​MESKLIN - Gravity: 3g at the equator, 700g at the poles! Hal Clement is a Grand Master of SF, and the one most associated with the subgenre of hard SF. From his classic stories in Astounding in the 1940s through his novels of the 1950s and on to the recent _Half Life_, he has made a lasting impression on SF readers, and on writers, too. For many of them, Clement's work is the model of how to write hard SF, and this book contains the reasons why. Here are all the tales of bizarre, unforgettable Mesklin: the classic novel _Mission of Gravity_ and its sequel, _Star Light_, as well as the short stories "Under" and "Lecture Demonstration." Also included is "Whirligig World," the famous essay Clement published in Astounding in 1953. It describes the rigorous process he used to create his intriguingly plausible high-gravity planet, with its odd flattened shape, its day less than eighteen minutes long, and its many-limbed, noble natives. Come to Mesklin and learn why _The Encyclopedia of Science Fiction_ called _Mission of Gravity_ "one of the best loved novels in SF." 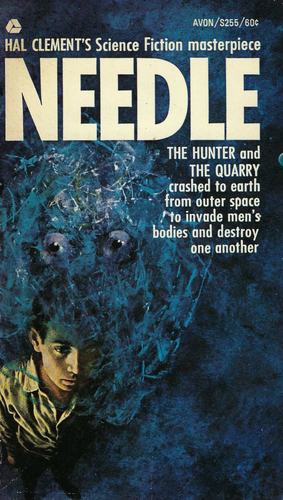 Hal Clement - Needle
The ​Hunter and his quarry raced through space—when suddenly both ships crashed head on into one of the oceans of earth! Both the Hunter and his quarry were symbiotes—creatures who had to live within the body of another organism. When the Hunter emerged from his wreck of a ship, he soon realized that a man of earth would make a suitable host. It became obvious, too, that his quarry had already selected his host—but which human being. Then the Hunter found an excellent host in the person of young and intelligent Robert Kinnaird. He made his presence known and, in return for some clever suggestions and help with his search, he helped Robert with his problems. There follows an exciting, excellently wrought, and—you will agree—absolutely unique chase and deduction story. Tense, dramatic, and humorous, too, it's a top-drawer tale of scientific ingenuity. 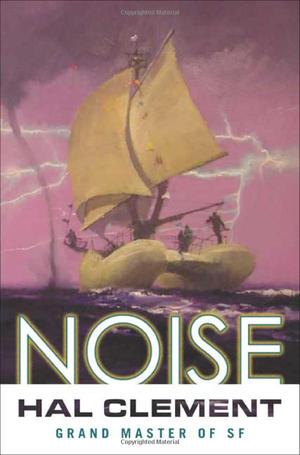 Hal Clement - Noise
Hal ​Clement, the dean of hard science fiction, has written a new planetary adventure in the tradition of his classic Mission of Gravity. It is the kind of story that made his reputation as a meticulous designer of otherworldly settings that are utterly convincing because they are constructed from the ground up using established principles of orbital mechanics, geology, chemistry, biology, and other sciences. Kainui is one of a pair of double planets circling a pair of binary stars. Mike Hoani has come there to study the language of the colonists, to analyze its evolution in the years since settlement. But Kainui is an ocean planet. Although settled by Polynesians, it is anything but a tropical paradise. The ocean is 1,700 miles deep, with no solid ground anywhere. The population is scattered in cities on floating artificial islands with no fixed locations. The atmosphere isn't breathable, and lightning, waterspouts, and tsunamis are constant. Out on the great planetary ocean, self-sufficiency is crucial, and far from any floating city, on a small working-family ship, anything can happen. There are, for instance, pirates. Mike's academic research turns into an exotic nautical adventure unlike anything he could have imagined. 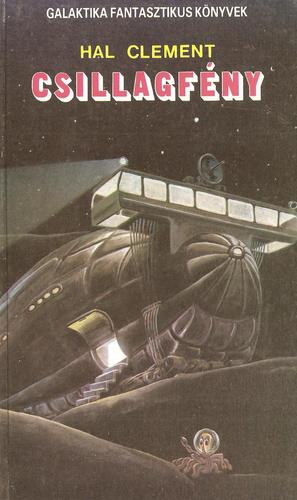 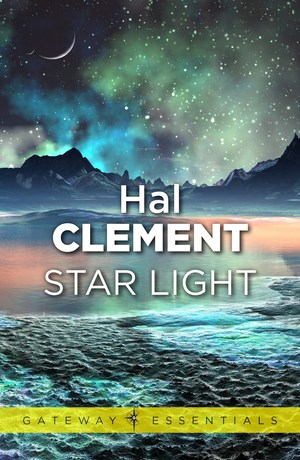 Hal Clement - Star ​Light
Dhrawn ​was a giant rockball, more than 3,000 times the mass of Earth. Perhaps a planet, perhaps a nearly dead star, these 17 billion square miles of mystery cried out for investigation. But its corrosive atmosphere and crushing gravity assured that no human would ever set foot on its surface. Those hardy, caterpillarlike Mesklinites, on the other hand, were ideally suited to explore Dhrawn, and their leader certainly knew a good deal when he saw one. So Barlennan, a shrewd sea captain if ever there was one, struck a sharp bargain with the Earthmen for his services in leading the expedition. But the humans might not have been so pleased with their side of the bargain, if they had known that Barlennan had plans of his own for Dhrawn.... 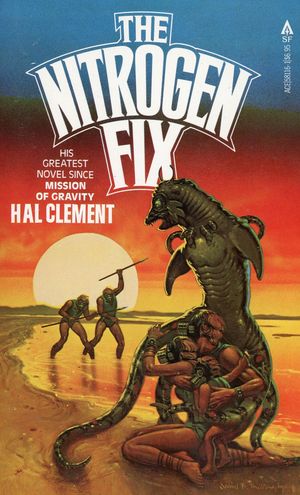 Hal Clement - The ​Nitrogen Fix
2000 ​years from now, the Earth has acid oceans, mutating exploding plants, silent, tentacled observers, doomed Hill cities, nomad Outcasts, vicious, power-mad rebels. The Earth does not have oxygen; it has all been trapped in The Nitrogen Fix, a novel of the ultimate ecological disaster. 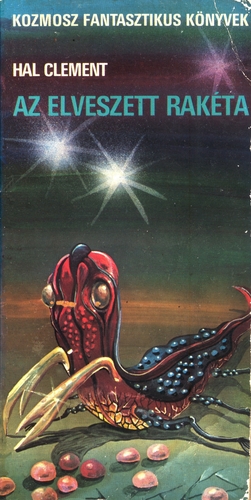 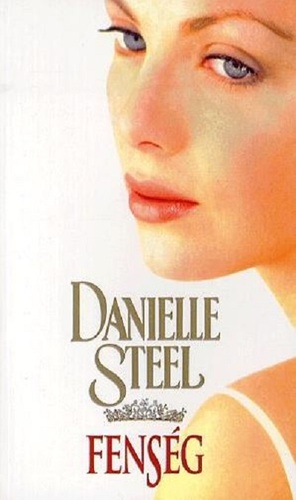