Escape from the Planet of the Apes Jerry Pournelle
0

Jerry Pournelle - Escape from the Planet of the Apes
The time indicator raced back through the years--from 3955 to 1973. The spacecraft held the Earth's future inhabitants - three survivors of a devastating cataclysm. The capsule's occupants included Cornelius, his mate Zira, and Dr. Milo--three Apes, the thinking, speaking descendants of the species that had dominated Man and the Earth for centuries. The world of 1973 welcomed them at first, pampered them when it realized their unusual qualities, threatened them later when it was learned that Zira carried the seed of the future ascendance of Ape over Man. 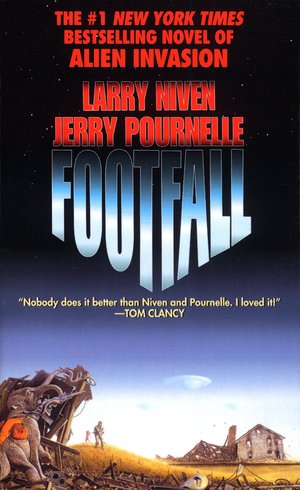 Larry Niven - Jerry Pournelle - Footfall
They ​first appear as a series of dots on astronomical plates, heading from Saturn directly toward Earth. Since the ringed planet carries no life, scientists deduce the mysterious ship to be a visitor from another star. The world's frantic efforts to signal the aliens go unanswered. The first contact is hostile: the invaders blast a Soviet space station, seize the survivors, and then destroy every dam and installation on Earth with a hail of asteriods. Now the conquerors are descending on the American heartland, demanding servile surrender--or death for all humans. 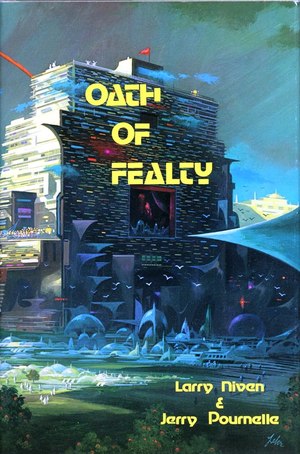 Larry Niven - Jerry Pournelle - Oath ​of Fealty
In ​the near future, Los Angeles is an all but uninhabitable war zone, racked by crime, violence, pollution and poverty. But above the blighted city, a Utopia has arisen: Todos Santos, a thousand-foot high single-structured city, designed to used state-of-the-art technology to create a completely human-friendly environment, offering its dwellers everything they could want in exchange for their oath of allegiance and their constant surveillance . But there are those who want to see the utopia destroyed, whose answer to tomorrow's best and brightest hope is mindless violence. And they have just entered Todos Santos. . . . 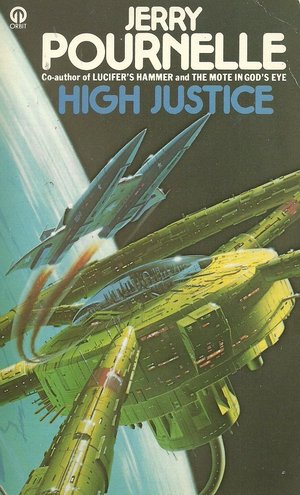 Jerry Pournelle - High ​Justice
High ​Justice begins Jerry Pournelle's own Future History, a universe which he shared with Larry Niven in their collaborative novel, The Mote in God's Eye. Here we see, with all the vivid detail for which Pournelle is known, the Fall of the West, and how in its death throes it gave birth to a society that would conquer the stars themselves, as real people battle desperate odds, both for their own survival and for something more - for High Justice. 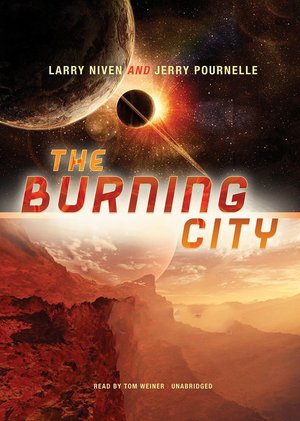 Larry Niven - Jerry Pournelle - The ​Burning City
Set ​in the world of Larry Niven's popular _The Magic Goes Away_, _The Burning City_ transports readers to an enchanted ancient city bearing a provocative resemblance to our own modern society. Here Yagen-Atep, the volatile and voracious god of fire, alternately protects and destroys the city's denizens. In Tep's Town, nothing can burn indoors and no fire can start -- except when the Burning comes upon the city. Then the people, possessed by Yagen-Atep, set their own town ablaze in a riotous orgy of destruction that often comes without warning. Whandall Placehold has lived with the Burning all his life. Fighting his way to adulthood in the mean-but-magical streets of the city's most blighted neighborhoods, Whandall dreams of escaping the god's wrath to find a new and better life. But his best hope for freedom may lie with Morth of Atlantis, the enigmatic sorcerer who killed his father! 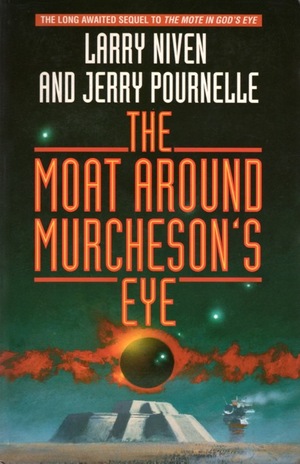 Larry Niven - Jerry Pournelle - The ​Moat Around Murcheson's Eye
Humankind ​has spent years agonizing over the deadly threat posed by the only aliens they have ever encountered, the Moties. A race divided into distinct biological forms, each serving a different function. Now the Moties are isolated - until the empire is threatened. By the authors of "Footfall". 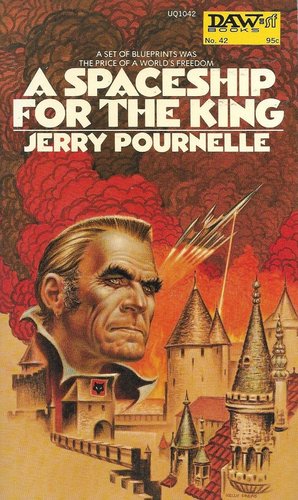 A ​Spaceship for the King Jerry Pournelle
0

Jerry Pournelle - A ​Spaceship for the King
They ​had struggled upwards for a thousand years to reach the point Earth had reached in the early 20th Century—and then the revived Galactic Empire took them over as a colony. There was one condition under which the planet's people could achieve freedom—they had to prove they could build themselves a spaceship on their own know-how. The plans for such a starship existed on an even more backward world—heavily guarded as taboo documents. So the puppet king called on his former foeman, Nathan MacKinnie, to go and bring back the "sacred" blueprints—without bringing a world-destroying Imperial fleet on his heels. 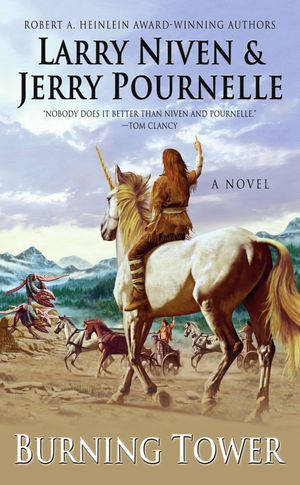 Larry Niven - Jerry Pournelle - Burning ​Tower
The ​people of Tep's Town are desperate. Monstrous invaders have emerged from the desert, and people are being slaughtered. Danger on the roads means no trade. No trade means that Tep's Town itself will die. The fire god Yangin-Atep has retreated into myth, leaving the town's residents unprotected for the first time in its history - and they now face an army of fearsome birds with blades for wings, consumed by an inexorable lust for blood. Lord Sandry and his beloved, Burning Tower, must travel far beyond the walls of their home to discover the origin of these terror birds. They enter a world where magic is still strong - and someone or something has been waiting to destroy them... 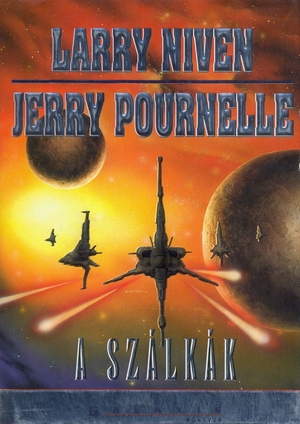 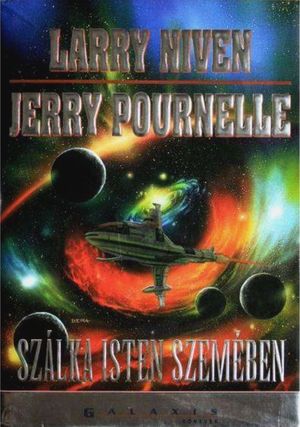 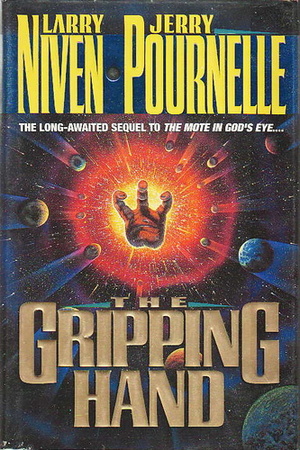 Larry Niven - Jerry Pournelle - The ​Gripping Hand
Robert ​Heinlein called it "possibly the finest science fiction novel I have ever read." The San Francisco Chronicle declared that "as science fiction, The Mote in God's Eye is one of the most important novels ever published." Now Larry Niven and Jerry Pournelle, award winning authors of such bestsellers as Footfall and The Legacy of Heorot, return us to the Mote, and to the universe of Kevin Renner and Horace Bury, of Rod Blaine and Sally Fowler. There, 25 years have passed since humanity quarantined the mysterious aliens known as Moties within the confines of their own solar system. They have spent a quarter century analyzing and agonizing over the deadly threat posed by the only aliens mankind has ever encountered-- a race divided into distinct biological forms, each serving a different function. Master, Mediator, Engineer. Warrior. Each supremely adapted to its task, yet doomed by millions of years of evolution to an inescapable fate. For the Moties must breed-- or die. And now the fragile wall separating them and the galaxy beyond is beginning to crumble. 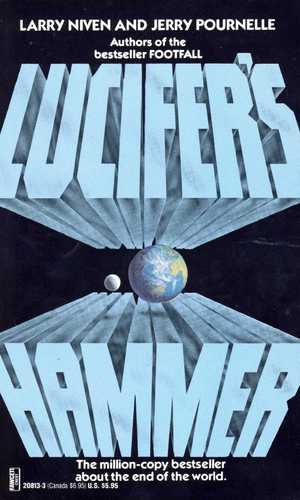 Larry Niven - Jerry Pournelle - Lucifer's ​Hammer
The ​gigantic comet had slammed into Earth, forging earthquakes a thousand times too powerful to measure on the Richter scale, tidal waves thousands of feet high. Cities were turned into oceans; oceans turned into steam. It was the beginning of a new Ice Age and the end of civilization. But for the terrified men and women chance had saved, it was also the dawn of a new struggle for survival--a struggle more dangerous and challenging than any they had ever known.... 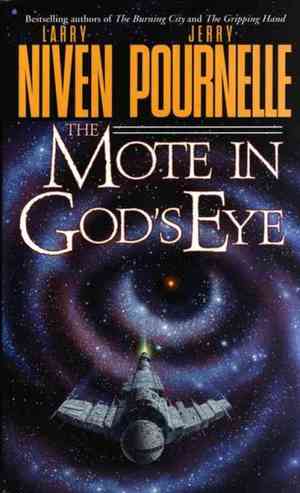 Larry Niven - Jerry Pournelle - The ​Mote in God's Eye
In ​the year 3016, the Second Empire of Man spans hundreds of star systems, thanks to the faster-than-light Alderson Drive. No other intelligent beings have ever been encountered, not until a lightsail probe enters a human system carrying a dead alien. The probe is traced to the Mote, an isolated star in a thick dust cloud, and an expedition is dispatched. In the Mote the humans find an ancient civilization--at least one million years old--that has always been bottled up in their cloistered solar system for lack of a star drive. The Moties are welcoming and kind, yet rather evasive about certain aspects of their society. It seems the Moties have a dark problem, one they've been unable to solve in over a million years. This is the first collaboration between Niven and Pournelle, two masters of hard science fiction, and it combines Pournelle's interest in the military and sociology with Niven's talent for creating interesting, believable aliens. The novel meticulously examines every aspect of First Contact, from the Moties' biology, society and art, to the effects of the meeting on humanity's economics, politics and religions. And all the while suspense builds as we watch the humans struggle toward the truth.