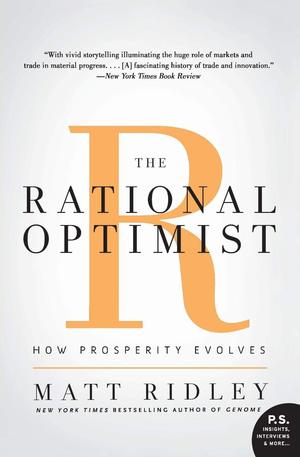 Matt Ridley - The ​Rational Optimist
Life ​is getting better—and at an accelerating rate. Food availability, income, and life span are up; disease, child mortality, and violence are down — all across the globe. Though the world is far from perfect, necessities and luxuries alike are getting cheaper; population growth is slowing; Africa is following Asia out of poverty; the Internet, the mobile phone, and container shipping are enriching people’s lives as never before. The pessimists who dominate public discourse insist that we will soon reach a turning point and things will start to get worse. But they have been saying this for two hundred years. Yet Matt Ridley does more than describe how things are getting better. He explains why. Prosperity comes from everybody working for everybody else. The habit of exchange and specialization—which started more than 100,000 years ago—has created a collective brain that sets human living standards on a rising trend. The mutual dependence, trust, and sharing that result are causes for hope, not despair. This bold book covers the entire sweep of human history, from the Stone Age to the Internet, from the stagnation of the Ming empire to the invention of the steam engine, from the population explosion to the likely consequences of climate change. It ends with a confident assertion that thanks to the ceaseless capacity of the human race for innovative change, and despite inevitable disasters along the way, the twenty-first century will see both human prosperity and natural biodiversity enhanced. Acute, refreshing, and revelatory, The Rational Optimist will change your way of thinking about the world for the better. 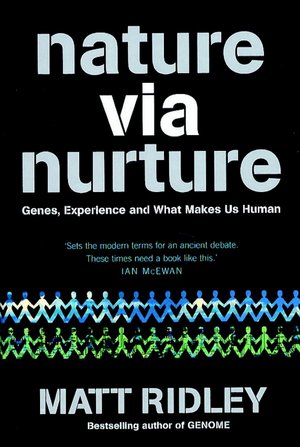 Matt Ridley - Nature ​Via Nurture
This ​is acclaimed author Matt Ridley's thrilling follow-up to his bestseller Genome. Armed with the extraordinary new discoveries about our genes, Ridley turns his attention to the nature versus nurture debate to bring the first popular account of the roots of human behaviour. What makes us who we are? In February 2001 it was announced that the genome contains not 100,000 genes as originally expected but only 30,000. This startling revision led some scientists to conclude that there are simply not enough human genes to account for all the different ways people behave: we must be made by nurture, not nature. Yet again biology was to be stretched on the Procrustean bed of the nature-nurture debate. Acclaimed science writer Matt Ridley argues that the emerging truth is far more interesting than this myth. Nurture depends on genes, too, and genes need nurture. Genes not only predetermine the broad structure of the brain; they also absorb formative experiences, react to social cues and even run memory. They are consequences as well as causes of the will. via Nurture chronicles a new revolution in our understanding of genes. Ridley recounts the hundred years' war between the partisans of nature and nurture to explain how this paradoxical creature, the human being, can be simultaneously free-willed and motivated by instinct and culture. Nature via Nurture is an enthralling, up-to-the-minute account of how genes build brains to absorb experience. 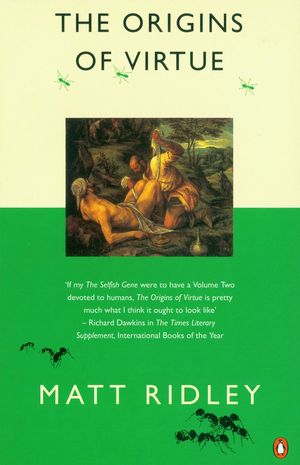 The ​Origins of Virtue Matt Ridley
0

Matt Ridley - The ​Origins of Virtue
If ​evolution by natural selection relentlessly favors self-interest, why do human beings live in complex societies and show so much cooperative spirit? In The Origins of Virtue, Matt Ridley, a zoologist and former American editor of the Economist, shows that recent research in a number of fields has suggested a resolution of the apparent contradiction between self-interest and mutual aid. Brilliantly orchestrating the new findings of geneticists, psychologists, and anthropologists, The Origins of Virtue re-examines the everyday assumptions upon which we base our actions towards others, whether we are nurturing parents, siblings, or trade partners. The Origins of Virtue searches for the roots of that capacity for trust, contrasts it with the social instincts of ants, baboons, and naked mole rats, and draws provocative conclusions for our understanding of politics. Ridley not only traces the evolution of society but shows us how breakthroughs in computer programming, microbiology, and economics have all played their role in providing us with a unique perspective on how and why we relate to each other. 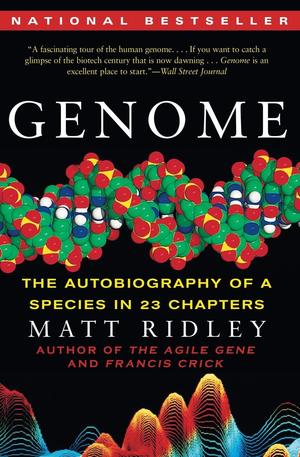 Matt Ridley - Genome
The ​genome's been mapped. But what does it mean? Arguably the most significant scientific discovery of the new century, the mapping of the twenty-three pairs of chromosomes that make up the human genome raises almost as many questions as it answers. Questions that will profoundly impact the way we think about disease, about longevity, and about free will. Questions that will affect the rest of your life. _Genome_ offers extraordinary insight into the ramifications of this incredible breakthrough. By picking one newly discovered gene from each pair of chromosomes and telling its story, Matt Ridley recounts the history of our species and its ancestors from the dawn of life to the brink of future medicine. From Huntington&#39;s disease to cancer, from the applications of gene therapy to the horrors of eugenics, Matt Ridley probes the scientific, philosophical, and moral issues arising as a result of the mapping of the genome. It will help you understand what this scientific milestone means for you, for your children, and for humankind. 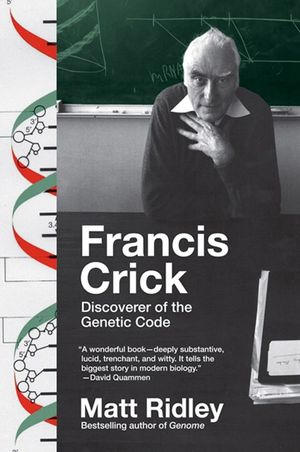 Matt Ridley - Francis ​Crick
Part ​of the acclaimed Eminent Lives series, Francis Crick is the first biography of the eminent scientist, co-discoverer of the double helix structure of DNA. Written by Matt Ridley, the award-winning author of the national bestseller Genome, Francis Crick traces his life from middle class mediocrity in the English Midlands through a lackluster education and six years designing magnetic mines for the Royal Navy to his leap into biology at the age of 31 and his enormous success, providing “a considerably more complete and colorful portrait of Crick than has existed before.” (New York Times) 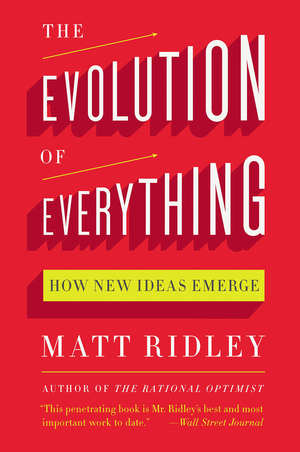 The ​Evolution of Everything Matt Ridley
0

Matt Ridley - The ​Evolution of Everything
The ​New York Times bestselling author of The Rational Optimist and Genome returns with a fascinating, brilliant argument for evolution that definitively dispels a dangerous, widespread myth: that we can command and control our world. The Evolution of Everything is about bottom-up order and its enemy, the top-down twitch—the endless fascination human beings have for design rather than evolution, for direction rather than emergence. Drawing on anecdotes from science, economics, history, politics and philosophy, Matt Ridley’s wide-ranging, highly opinionated opus demolishes conventional assumptions that major scientific and social imperatives are dictated by those on high, whether in government, business, academia, or morality. On the contrary, our most important achievements develop from the bottom up. Patterns emerge, trends evolve. Just as skeins of geese form Vs in the sky without meaning to, and termites build mud cathedrals without architects, so brains take shape without brain-makers, learning can happen without teaching and morality changes without a plan. Although we neglect, defy and ignore them, bottom-up trends shape the world. The growth of technology, the sanitation-driven health revolution, the quadrupling of farm yields so that more land can be released for nature—these were largely emergent phenomena, as were the Internet, the mobile phone revolution, and the rise of Asia. Ridley demolishes the arguments for design and effectively makes the case for evolution in the universe, morality, genes, the economy, culture, technology, the mind, personality, population, education, history, government, God, money, and the future. As compelling as it is controversial, authoritative as it is ambitious, Ridley’s stunning perspective will revolutionize the way we think about our world and how it works. 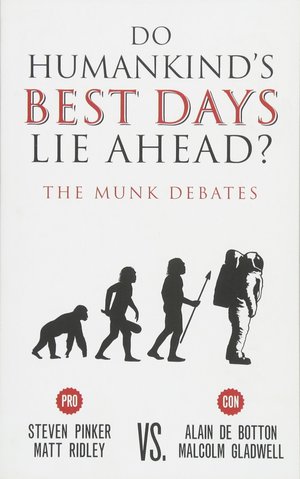 Steven Pinker - Matt Ridley - Alain de Botton - Malcolm Gladwell - Do ​Humankind's Best Days Lie Ahead?
Progress. ​It is one of the animating concepts of the modern era. From the Enlightenment onwards, the West has had an enduring belief that through the evolution of institutions, innovations, and ideas, the human condition is improving. This process is supposedly accelerating as new technologies, individual freedoms, and the spread of global norms empower individuals and societies around the world. But is progress inevitable? Its critics argue that human civilization has become different, not better, over the last two and a half centuries. What is seen as a breakthrough or innovation in one period becomes a setback or limitation in another. In short, progress is an ideology not a fact; a way of thinking about the world as opposed to a description of reality. In the seventeenth semi-annual Munk Debates, which was held in Toronto on November 6, 2015, pioneering cognitive scientist Steven Pinker and best-selling author Matt Ridley squared off against noted philosopher Alain de Botton and best-selling author Malcolm Gladwell to debate whether humankind’s best days lie ahead. 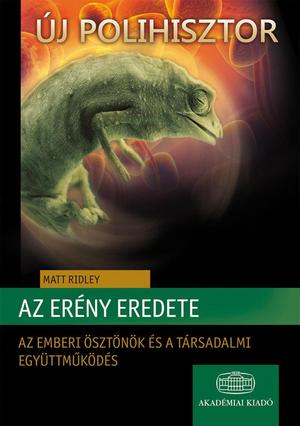 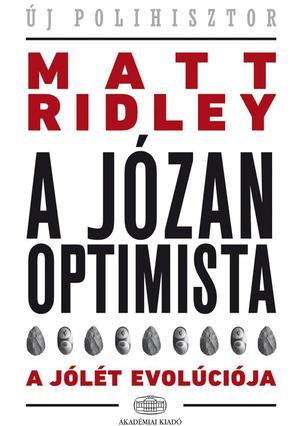 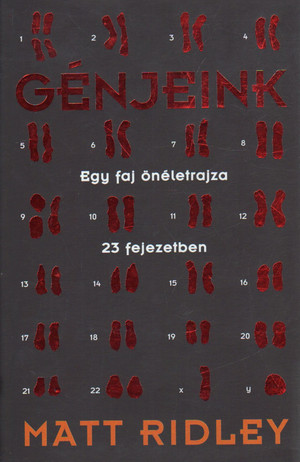 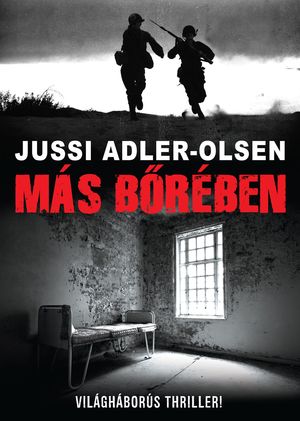