From ​New York Times bestselling author James Rollins comes a novel of boundless imagination and meticulous research, a book that dares to answer a frightening question at the heart of America: Could the founding of the United States be based on a fundamental lie? The shocking truth lies hidden within the ruins of an impossibility, a lost colony of the Americas vanished in time and cursed into oblivion. A place known only as The Devil Colony.

Deep in the Rocky Mountains, a gruesome discovery—hundreds of mummified bodies—stirs international attention and fervent controversy. Despite doubts about the bodies’ origins, the local Native American Heritage Commission lays claim to the prehistoric remains, along with the strange artifacts found in the same cavern: gold plates inscribed with an unfathomable script.

During a riot at the dig site, an anthropologist dies horribly, burned to ashes in a fiery explosion in plain view of television cameras. All evidence points to a radical group of Native Americans, including one agitator, a teenage firebrand who escapes with a vital clue to the murder and calls on the one person who might help—her uncle, Painter Crowe, Director of Sigma Force.

To protect his niece and uncover the truth, Painter will ignite a war among the nation’s most powerful intelligence agencies. Yet an even greater threat looms as events in the Rocky Mountains have set in motion a frightening chain reaction, a geological meltdown that threatens the entire western half of the U.S.

From the volcanic peaks of Iceland to the blistering deserts of the American Southwest, from the gold vaults of Fort Knox to the bubbling geysers of Yellowstone, Painter Crowe joins forces with Commander Gray Pierce to penetrate the shadowy heart of a dark cabal, one that has been manipulating American history since the founding of the thirteen colonies.

But can Painter discover the truth—one that could topple governments—before it destroys all he holds dear? 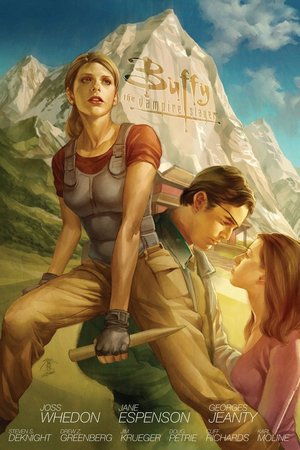 Jane Espenson - Steven S. DeKnight - Drew Z. Greenberg - Jim Krueger - Doug Petrie - Buffy ​the Vampire Slayer Season 8 Library Edition 3.
Joss ​Whedon's Buffy the Vampire Slayer television series continues in comic form with the revolutionary Season 8! This deluxe hardcover edition collects Predators and Prey and Retreat, the fifth and sixth arcs of Season 8, along with three short stories originally published in MySpace Dark Horse Presents. In a strange turn of events, Buffy begins to experience Twilight's reach through the growing mass popularity of vampires - they even have a spokesperson with a reality TV show, Harmony Kendall! Rebel Slayer Faith continues on her journey to help other directionless Slayers, and Slayer Simone has also come back onto the Scoobies' radar. Meanwhile, Dawn finally deals with her ongoing growing pains. Then, as more and more of the world seems to envision Slayers as public enemy number one, Buffy takes her troops to a refuge in the Tibetan mountains, where she hopes to receive some help from Oz. 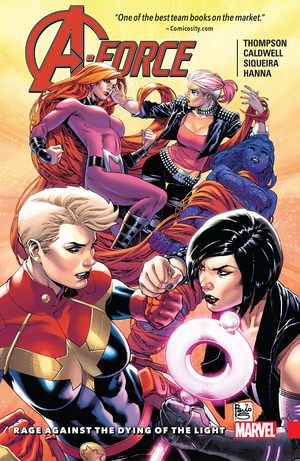 Kelly Thompson - Ben Caldwell - Paulo Siqueira - A-Force ​2. - Rage Against The Dying Of The Light
A-Force ​is assembled - but for how long? When a massive dragon attacks a small coastal town, She-Hulk, Captain Marvel, Medusa, Dazzler, Nico Minoru and Singularity spring into action! But this dragon is more than she seems and has much bigger plans - including turning one of the team's heaviest hitters against her allies! Will A-Force meet an early end at the hands of one of their own? Or will they be torn apart by the looming CIVIL WAR II? For when a predictive vision proclaims that one member is a murderer, Captain Marvel takes action. A rift is created that sets in motion a chain of devastating events - aff ecting not just A-Force, but the whole Marvel Universe! Plus, a dazzling Thor steals the limelight...and the foul-mouthed, gun-toting Elsa Bloodstone will blow you away! COLLECTING: A-FORCE 5-10 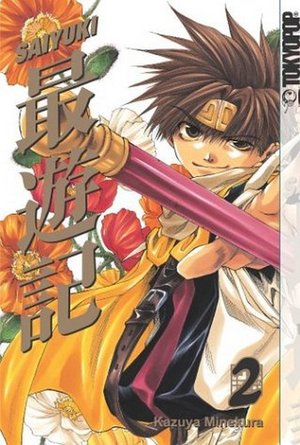 Kazuya Minekura - Saiyuki ​2.
Relates ​the adventures of Genjyo Sanzo and his team of Yokai warriors as they journey west trying to stop a mystical plague. 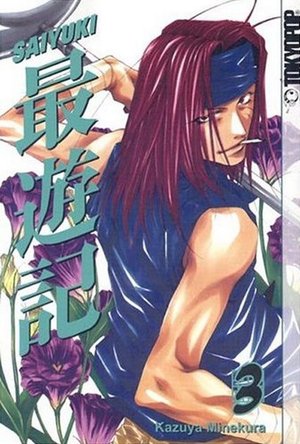 Kazuya Minekura - Saiyuki ​3.
In ​the midst of battle with Sanzo and his team, a cursed human by the name of Rikudo impales the human leader, as he tries to protect Goku. In the melee, Goku's Youkai power limiter, the device that keeps his Youkai madness from taking over his soul, shatters, sending Goku into a violent rampage that yields for neither friend nor foe. 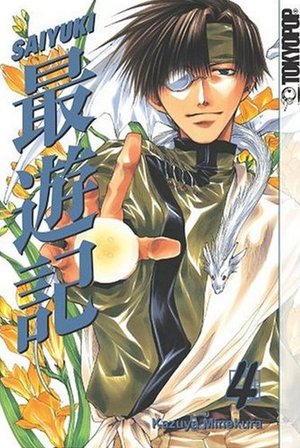 Kazuya Minekura - Saiyuki ​4.
The ​mysterious fortune-teller Chin Yisou takes great pleasure in pushing Hakkai's psychological boundaries, and Hakkai is frightened to find his bloody past nipping at his heels. When Chin Yisou starts targeting Sanzo and the others, our heroes find themselves not only fighting against him, but against each other. 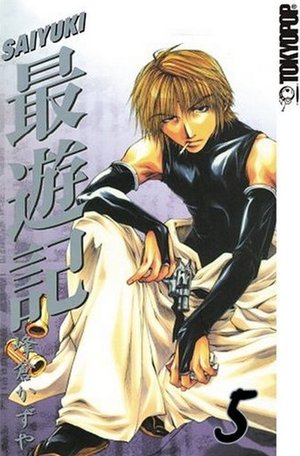 Kazuya Minekura - Saiyuki ​5.
Violence ​drew them close, but something far more powerful kept them together. The story of how Sanzo, Goku, Gojyo, and Hakkai met is revealed at last. 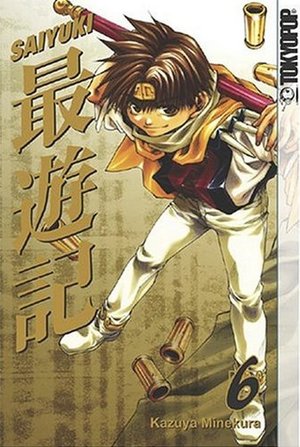 Kazuya Minekura - Saiyuki ​6.
With ​poison coursing through his veins, Sanzo's life dwindles as Goku and the others fight to discover a way out of their desert prison. Although Kougaiji offers a solution, there's a catch - Goku must first defeat him in combat! Goku's desperation grows as Sanzo's health rapidly fails, but there's no divine intervention if Goku loses control this time. Will Goku put Sanzo's life above everything...and everyone? 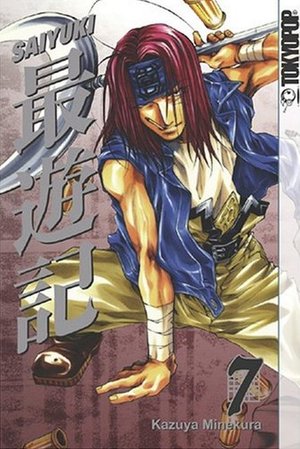 Kazuya Minekura - Saiyuki ​7.
A ​set of twins barge in our heroes, one which is transformed into a monster. While Goku and Hakkai are sucked into the twin's magical gourd, Sanzou and Gojyo set off a hunt for the twin. They find that the demon twins escaped from their village and were taken under the wing of "God", a mysterious figure who granted them whatever they wanted. However, as punishment for one of the twins, Ginkaku, wanted to run away, he transformed him into a monster and convinced his brother to kill "bad guys" in order to return him to normal. In the end, "God" appears to finish off the two of them, because he considers them "toys" which he free to do whatever he wants to them. Deeply disturbed by the murder of the two innocent boys, Gojyo runs off without the others the next morning. The last chapter of the volume gives a sneak peak into the past of our main characters from ten years ago. Goku trapped in his stone cage, Gojyo being ignored by his insane mother, a sullen Hakkai in an orphanage, and Sanzou with his first gun. 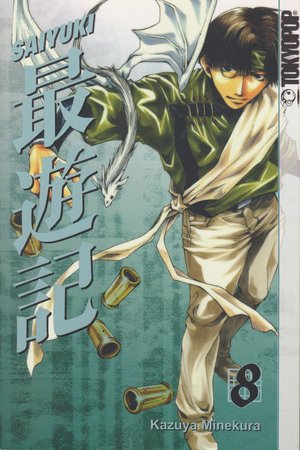 Kazuya Minekura - Saiyuki ​8.
As ​Sanzou, Goku, and Hakkai go off in search of "God" (and Gojyo on the side), Gojyo makes it to a mysterious set of stairs that seem to stretch on forever. In the eerie mist that develops, he is attacked by an illusion of his mother, and eventually makes it to the top. There "God" (who falls apart into beads when attacked) greets him and they battle. This "God" character is also known as Sanzou Houshi, so apparently there are more than one "Sanzou Houshi". Like any monk that was raised in the same temple as Sanzo. Eventually, the rest of the team makes it up the mysterious set of stairs, fight off a fake Gojyu, and join the real Gojyu in the fight against "God". "God" is a very odd fellow, who considers all those weaker than him (which is pretty much everyone) to be his toys to play with. After first avoiding their attacks, "God" lashes out with a single attack that crushes the entire team of heroes. They retreat to recover from the loss and prepare for the final confrontation. 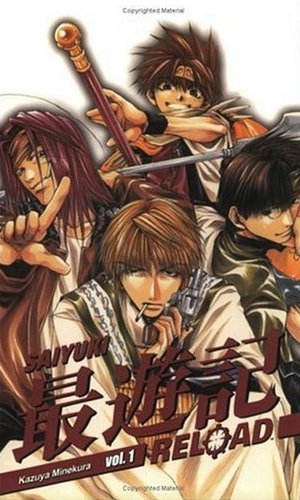 Kazuya Minekura - Saiyuki ​Reload 1.
The ​fearsome foursome continue their journey west towards Shangri-La, encountering new challenges and new adventures along the way. Their legend precedes them, but not always in the way one might expect. The Minus Wave that apparently drove all the youkai in the land mad looks like it might have missed one, as Sanzo, Gojyo, Hakkai, and Goku meet a lone guardian and the band of children he cares for. Fear and misunderstanding run throughout this particular leg of the journey, including between the members of the Sanzo group! 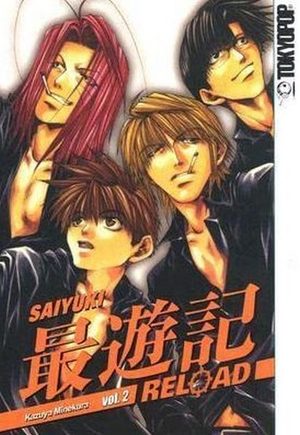 Kazuya Minekura - Saiyuki ​Reload 2.
The ​journey continues as Sanzo faces off against his evil doppleganger. The progress westward is held up continually as new villains surface, and an old foe makes a new appearance. Yaone and Dokugakuji drag our heroes out of a river just in time for the new and improved Kougaiji to come along to kick some butt. His soul replaced with unbelievable strength, Kou now proves to be a challenge for even Goku. While his companions wrestle with corporeal demons, Sanzo must face some of his own inner fears. 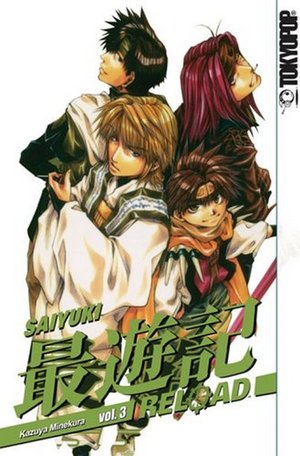 Kazuya Minekura - Saiyuki ​Reload 3.
Goku ​loses all ability to fight Kougaiji, Sanzo and the others show up to fight for him. Yaone and Dokugakuji aren't sure of what to do at first, because the current Kougaiji isn't the same Kougaiji they swore allegiance to, but eventually their loyalty helps Kougaiji overcome his brainwashing, and he is able to defeat Sanzo and company and take Lirin back from Ni. We also begin the "burial" arc, and an explanation of many of the characters' pasts. First is Ukoku Sanzo, otherwise known as Ni Jianyi, who becomes a friend of Koumyou, Genjyo Sanzo's former master. Next we go into Genjyo Sanzo's past. His process of becoming a full-fledged Sanzo priest is finally explained, and he also meets Goku, whom he frees from his prison on Mt. Gogyou. Goku, having nowhere else to go, keeps following Sanzo, until they get attacked by a bunch of bandits. Goku fights them all off, and then realizes that he had been calling for someone in his heart, and it was Sanzo who appeared. Lastly, Sanzo and company celebrate the one year anniversary of their having started the journey west. 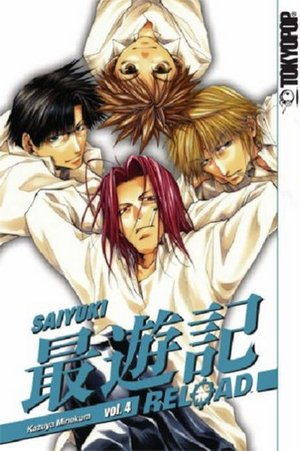 Kazuya Minekura - Saiyuki ​Reload 4.
New ​troubles and new characters are introduced in this exciting installment of "Saiyuki Reload." As the fearsome foursome continue on their latest adventure, what will happen when they are faced with a new kind of enemy? Rated for older teens. 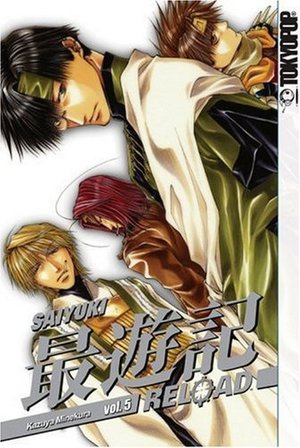 Kazuya Minekura - Saiyuki ​Reload 5.
A ​group of youkai advance upon Goku, Hakkai, and Gojyo. To stop the onslaught against Sanzo and company, Hazel and Gat show up to exterminate the attackers. Our heroes start to disagree with one another when youkai children join the fray! Is it morally wrong to slay those that are trying to kill you, even if they are children? 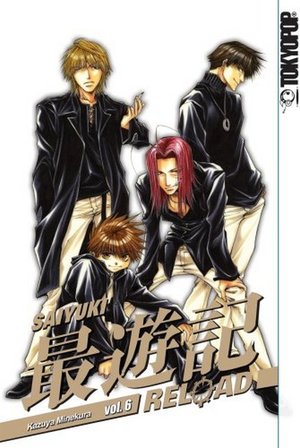 Kazuya Minekura - Saiyuki ​Reload 6.
Ukoku/Ni ​Jianyi returns! The renegade Sanzo priest tells Hazel of the Great Sage Equalling Heaven, how he is the most dangerous youkai in the land, and that the Sage is traveling with the Sanzo party. Hazel now has to make a new decision: Is his personal quest worth sacrificing a new friend? Meanwhile, the Sanzo party ends up in a mysteriously prosperous and youkai-free village. What kind of deal has the village headman made to maintain their safety? And what will happen when the fearsome foursome get involved?! 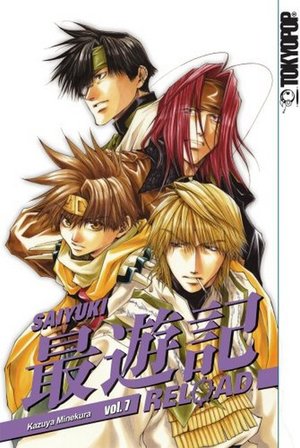 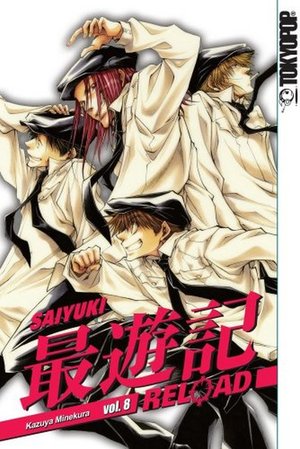 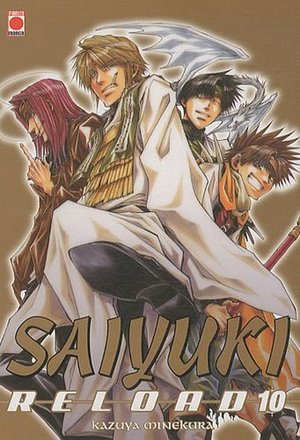 Kazuya Minekura - Saiyuki ​Reload 10.
Goku, ​Gojyo, and Hakkai arrive in time to rescue Sanzo from the darkness unleashed from the Maten Scripture, but the battle with Ukoku is far from over, as the 'Black Sanzo' still has another trick hidden up his sleeve - a pawn he has groomed from young, lured by the powers of resurrection. Whereabouts is the monster responsible for exorcist Filbert's death, and which side will Hazel stand on when the truth comes to light? For some the journey will continue on, but for some it has come to an end... 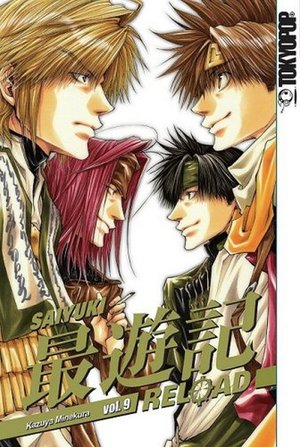 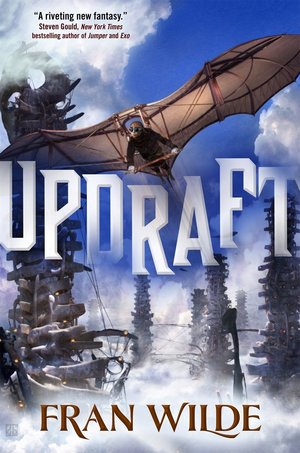 Fran Wilde - Updraft
In ​a city of living bone rising high above the clouds, where danger hides in the wind and the ground is lost to legend, a young woman must expose a dangerous secret to save everyone she loves. Welcome to a world of wind and bone, songs and silence, betrayal and courage.