The ​Last Kids on Earth: Thrilling Tales from the Tree House

The ​first ever graphic novel in the New York Times bestselling The Last Kids on Earth series—now with over 5 million copies in print!

The kids and their monster buddies are hanging out in the tree house, when Jack launches into an epic, totally-heroic, super rad story of one of his many post-apocalyptic adventures. Of course, after he’s finished, everyone’s eager to one-up his tale with a story of their own. Soon, Quint, Dirk, June and Skaelka, and even Globlet regale the group with sometimes outrageous, often hilarious details of their action-packed escapades during the monster-zombie apocalypse. Their stories are capped off by a special double-length feature which will finally reveal the mysterious whereabouts of two villainous villains to prep readers for the 7th book in the series coming Fall 2021! 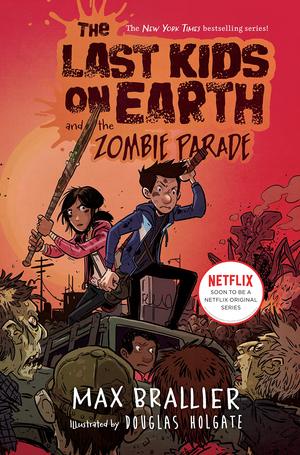 Cullen Bunn - Night ​of the Living Deadpool
Deadpool ​awakes from a food coma to find...the zombie apocalypse has occurred! Now, can the Merc with a mouth avoid becoming the Merc in their mouths?! Thrill to the sight of a hideous, rotting-fleshed monster shambling about the landscape...and don't forget all the zombies that he's fighting! (Get it? That first one referred to Deadpool. Who says zombie horror comics can't have a little humor?) Cullen Bunn, writer of the fan-favorite Deadpool Killogy, brings us one of Deadpool's darkest tales ever...and we're not just saying that because it's in black and white (and red)! So ring the dinner bell and nail shut the door, as Deadpool takes on the undead! COLLECTING: Night of the Living Deadpool 1-4 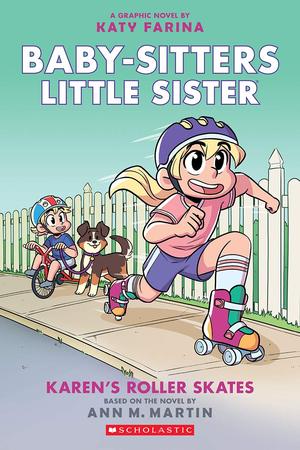 Ann M. Martin - Katy Farina - Karen's ​Roller Skates
Another ​graphic novel in this fresh and fun series spin-off of The Baby-sitters Club, featuring Kristy's little stepsister! It's going to be a great weekend! Karen has new roller skates and is a very good skater. She's looking forward to trying some new tricks. But, oh no! Karen falls down and has to go to the hospital. Her wrist is broken! Karen is determined to get everyone she knows -- plus someone famous -- to sign her cast. It isn't going to be easy, but she won't give up until the job is done. 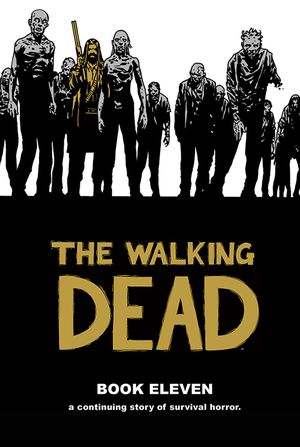 Robert Kirkman - The ​Walking Dead Book Eleven
After ​Alexandria is destroyed by Negan, the remaining communities unite for one last stand against the Saviors. The aftermath to their war leads to the biggest status quo change in the history of this acclaimed series. Collects The Walking Dead #121-132. 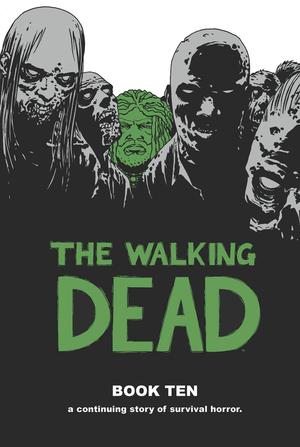 Robert Kirkman - The ​Walking Dead Book Ten
Rick's ​treaty with Negan and the Saviors is pushed to the limit, as both sides march toward ALL OUT WAR! Collects The Walking Dead #109-120. Robert Kirkman - The ​Walking Dead Book Nine
In ​this volume of the New York Times Bestselling survival horror, Rick and his band of survivors work to build a larger network of thriving communities. But Negan and his Saviors prove to be a larger threat than they could have imagined. Crossing them will lead to The Walking Dead's most harrowing story since the Governor's reign of terror! Robert Kirkman - The ​Walking Dead Book Eight
Rick ​and his group rebuild from the events of NO WAY OUT, and learn that maybe they can take part in A LARGER WORLD. Collects The Walking Dead # 85-96. 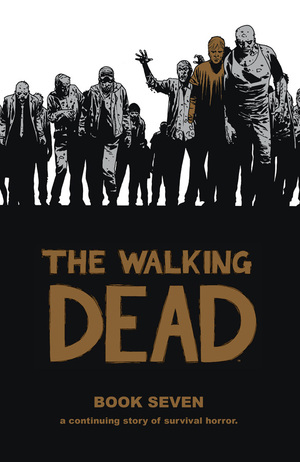 Robert Kirkman - The ​Walking Dead Book Seven
Rick ​and his group learn the dangers of living behind the safety of the Community walls, and much worse: what happens when those walls give way to those outside. - Collects The Walking Dead #73-84. 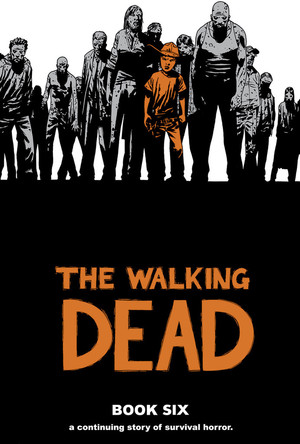 Robert Kirkman - The ​Walking Dead Book Six
This ​hardcover features another 12 issues of the hit series, all in one oversized hardcover volume. Perfect for long time fans, new readers, and anyone interested in reading a zombie movie on paper that never ends. - Collects The Walking Dead #61-72. 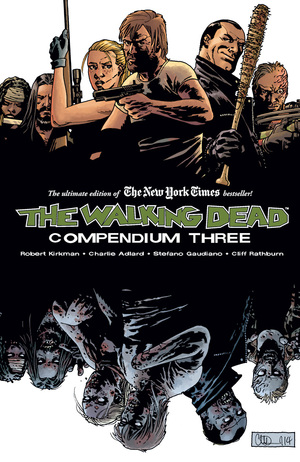 Robert Kirkman - The ​Walking Dead Compendium Three
The ​fan- favorite, New York Times bestselling series returns with its third massive collection! With over 1,000 pages, this volume contains the next chapter of ROBERT KIRKMAN's Eisner Award-winning continuing story of survival horror. Rick Grimes's dream of rebuilding civilization is tested as the people of Alexandria come into contact with other communities that have developed their own methods of survival. Collects THE WALKING DEAD #97-144. 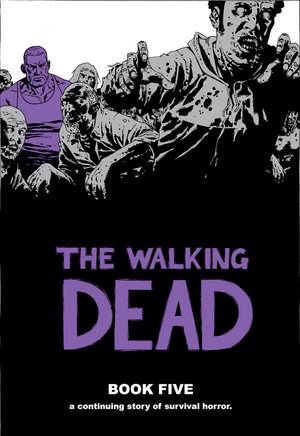 Robert Kirkman - The ​Walking Dead Book Five
This ​hardcover features another 12 issues of the hit series along with the covers for the issues all in one oversized hardcover volume. Perfect for long time fans, new readers, and anyone interested in reading a zombie movie on paper that never ends. Collects The Walking Dead #49-60. 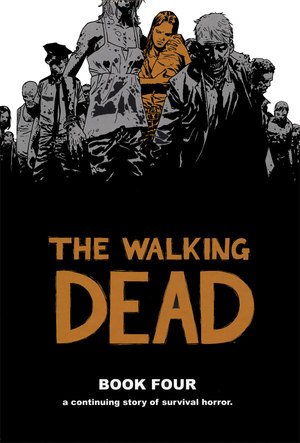 Robert Kirkman - The ​Walking Dead Book Four
The ​hardcover features another 12 issues of the hit series along with the covers for the issues all in one oversized hardcover volume. Perfect for long-time fans, new readers, and anyone interested in reading a zombie movie on paper that never ends. 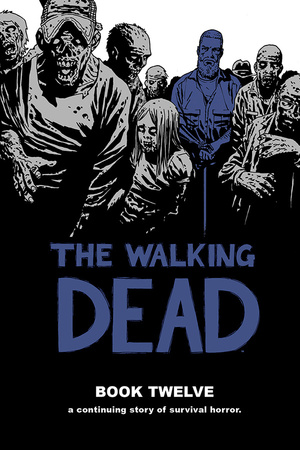 Robert Kirkman - The ​Walking Dead Book Twelve
After ​Rick delivers Carl to Hilltop to start their new lives apart, a threat emerges from within the walker hordes that no one could expect. A threat that will leave readers speechless. Collects The Walking Dead #133-144. 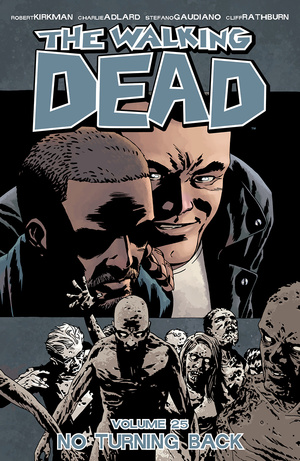 The ​Walking Dead 25. - No Turning Back Robert Kirkman
1

Robert Kirkman - The ​Walking Dead 25. - No Turning Back
After ​a devastating act of war by the Whisperers, Rick must chart a path for his community. But when his leadership is questioned, how will he respond? Collects THE WALKING DEAD #145-150. 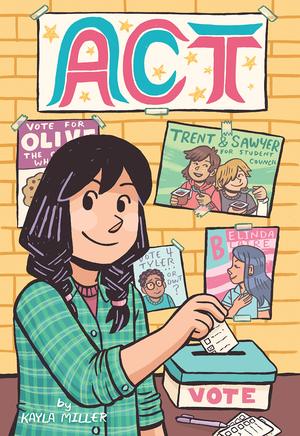 Kayla Miller - Act
Act ​is the funny and honest follow-up to the middle school graphic novel sensations Click and Camp. Perfect for fans of Raina Telgemeier, Shannon Hale, and Victoria Jamieson. How do you know when the person who can make the difference . . . is you? Olive is excited to start sixth grade: new teachers, new experiences, and a field trip to the big city with her best buds! But when Olive finds out that a school policy is keeping some kids from going on the trip, she decides to act. She's prepared to do whatever it takes to be heard—even if it means running against Trent and Sawyer, two of her closest friends, in the student council election! With intense campaign competition and emotions running high, can Olive make a big change and keep her friends? New York Times bestselling author-illustrator Kayla Miller crafts a genuine and inspiring story about evolving friendships, supportive family, and finding out that you—yes, you—have the power to make a difference. 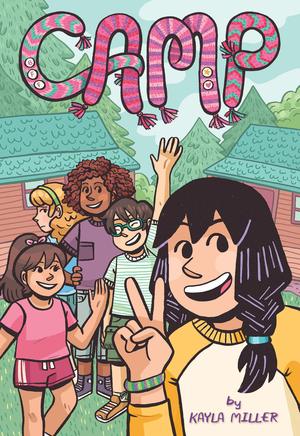 Kayla Miller - Camp
From ​New York Times bestselling author-illustrator Kayla Miller comes a graphic novel about venturing off to summer camp for the first time and stepping out of one's comfort zone, navigating new experiences, and the satisfaction of blazing your own trails. Olive and Willow are happy campers! Or are they? Olive is sure she’ll have the best time at summer camp with her friend Willow – but while Olive makes quick friends with the other campers, Willow struggles to form connections and latches on to the only person she knows – Olive. It’s s’more than Olive can handle! The stress of being Willow's living security blanket begins to wear on Olive and before long…the girls aren’t just fighting, they may not even be friends by the time camp is over. Will the two be able to patch things up before the final lights out? The New York Times bestselling author-illustrator Kayla Miller has created an emotional and honest story about navigating new experiences, learning to step outside one’s comfort zone, and the satisfaction of blazing your own trails. Looking for more of Olive’s adventures? Check out the companion books Click and Act. Robert Kirkman - The ​Walking Dead 5. - The Best Defense
The ​Walking Dead Volume 5: The Best Defense includes issues 25-30. After the dramatic events of the last volume, Rick Grimes, Glenn and Michonne leave the prison after attempting to rescue the occupants of a helicopter that had passed over the prison earlier. Their search brings them to a nearby town called Woodbury where a large, well-armed and well-organized group of survivors have taken refuge, led by a man called The Governor. Rick, Glenn and Michonne quickly learn, at terrible cost to themselves, that they have fallen into the hands of the most dangerous group of people they could have imagined. Rob Guillory - Farmhand ​1. - Reap What Was Sown
Jedidiah ​Jenkins is a farmer--but his cash crop isn't corn or soy. Jed grows fast-healing, plug-and-play human organs. Lose a finger? Need a new liver? He's got you covered. Unfortunately, strange produce isn't the only thing Jed's got buried. Deep in the soil of the Jenkins Family Farm, something dark has taken root, and it's beginning to bloom. From ROB GUILLORY, Eisner-winning co-creator and artist of Image Comics' CHEW, comes a new dark comedy about science gone sinister and agriculture gone apocalyptic. Nature is a Mother... Collects FARMHAND #1-5. 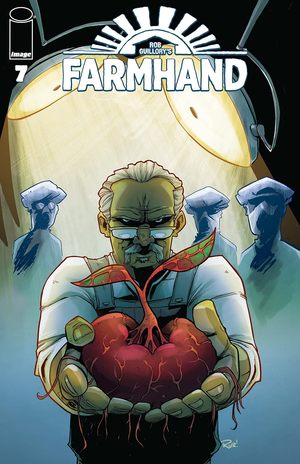 Rob Guillory - Farmhand ​2. - Thorne in the Flesh
Jedidiah ​Jenkins is a simple farmer. But his cash crop isn’t corn or soy. Instead, he grows fast-healing, highly customizable human organs—a miracle cure for all manner of ailments and injuries. Or they were, until his former patients began to transform into something not quite human. Now, these pour souls are coming to the Jenkins Farm searching for answers. But a dark figure lurks in their collective shadow—one with sinister plans for Jedidiah, his family, and the world. Collects FARMHAND #6-10 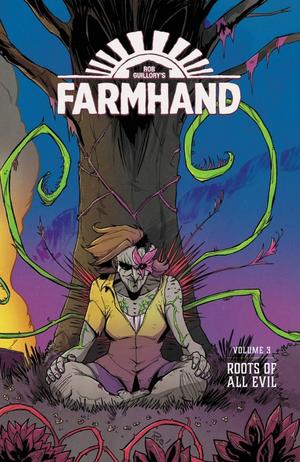 Rob Guillory - Farmhand ​3. - Roots of all Evil
Jedidiah ​Jenkins is a simple farmer. But his cash crop isn’t corn or soy. He grows fast-healing, highly customizable human organs.With the Jedidiah Seed leaking into the local ecosystem at an ever-increasing pace, the Jenkinses’ search for a cure will take them to the very roots of the seed’s creation. What they find there will rock Freetown and shatter their family.There is no going back. Collects FARMHAND #11-15