The ​Tengu's Game of Go

An ​epic four-volume adventure in mythical medieval Japan: a world of warriors and assassins, demons and spirits

In The Tengu’s Game of Go, the final book of Lian Hearn’s epic Tale of Shikanoko—all of which will be published in 2016—the rightful emperor is lost; illness and murder give rise to suspicions and make enemies of allies. Unrest rules the country. Only Shika can end the madness by returning the Lotus Throne to its rightful ruler.

As destiny weaves its rich tapestry, a compelling drama plays out against a background of wild forests, elegant castles, hidden temples, and savage battlefields. This is the medieval Japan of Lian Hearn’s imagination, where animal spirits clash with warriors and children navigate a landscape as serene as it is deadly. Tite Kubo - Bleach ​53.
As ​things seemed dire, Ichigo is once again rescued from thepit of despaor by Rukia. And she's not the only member of the Soul Society who shows up to help out. Now having finally regained his true Soul Reaper powers, Ichigo faces off against Ginjo wit no restraints. 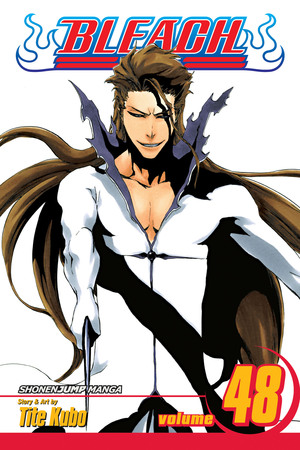 Tite Kubo - Bleach ​48.
Gin ​turns on Aizen, as he was always planning to, and tries to steal the Hōgyoku. Aizen transforms again and easily cuts down Gin, leaving him near death. As Matsumoto goes to see Gin, Ichigo arrives and takes Aizen away from Karakura Town. Although Ichigo easily overpowers Aizen, Aizen continues evolving due to the Hōgyoku. Therefore, Ichigo uses the technique Zangetsu taught him to weaken Aizen at the price of his Soul Reaper powers. As Aizen tries to continue fighting, a kido spell placed on him by Urahara earlier activates, sealing Aizen away. While Soul Society recovers and Aizen is imprisoned, Ichigo loses the last of his powers and bids farewell to Rukia. 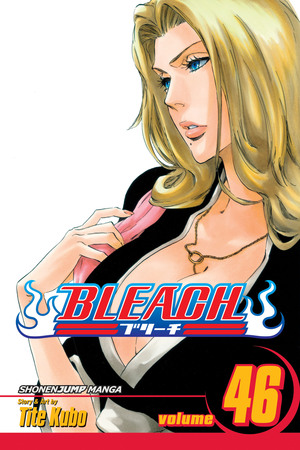 Tite Kubo - Bleach ​46.
Although ​Ichigo's attack wounds Aizen, he is regenerated by the Hōgyoku, which he has merged himself with. Aizen explains to Ichigo that his growth from the time he met Rukia has been part of his plans, but is interrupted by Isshin. Isshin calms Ichigo, who battles Gin, while he confronts Aizen. As Aizen is weakened in battle, the Hōgyoku starts transforming his body into a greater form. Urahara and Yoruichi arrive and join Isshin in fighting Aizen, but all their methods are ineffective. Meanwhile, a wounded Matsumoto tries to get to Gin. Tite Kubo - Bleach ​44.
Old ​friends turn against each other as Tosen and Komamura battle it out. Will Tosen’s new powers be too much for the Soul Reapers? And when Hirako reveals his Bankai for the first time, can he turn the tables against Aizen?! Tite Kubo - Bleach ​43.
The ​battle against Aizen’s Espadas continues as the Soul Reapers search for a way to defeat Barragan’s terrifying abilities. Meanwhile, Shunsui will need every trick in his bag to compete against Stark! Tite Kubo - Bleach ​42.
With ​their bankai, Hitsugaya and Soi Fon temporarily overpower their opponents. Stark releases his zanpakutō by merging with Lilinette, forcing Ukitake to jump in to help Kyoraku. Arrancar Wonderweiss Margera arrives to aid the Espada, gravely injuring Ukitake, and Starrk wounds Kyōraku when he tries to fight him. The Hollow named Fura frees Aizen, Gin and Tōsen from Yamamoto's fire-prison, but before the captains are defeated, the Visored come to their defense. They quickly defeat Fura and then proceed to assist the captains, with Lisa Yadomaru and Hiyori helping Hitsugaya against Halibel, Hachi joining Soi Fon and Ōmaeda against Barragan and Love Aikawa and Rōjūrō "Rose" Otoribashi taking Kyōraku and Ukitake's places against Stark. Komamura and an exhausted Hisagi then prepare to face Tōsen. 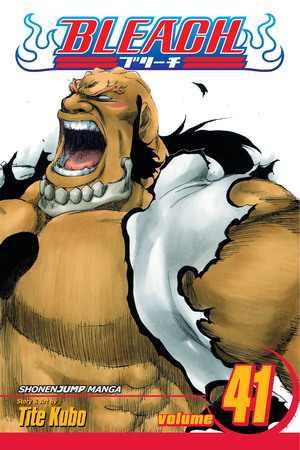 Tite Kubo - Bleach ​41.
Now ​turned into a berserker hollow, Ichigo attacks Ulquiorra until he is stopped by Uryū just before Ichigo delivers the final blow. However, Ichigo sees his friends as enemies and before he attacks them, Ulquiorra knocks him out. Ichigo's body returns to its Soul Reaper state, but before he can continue fighting, Ulquiorra's body is destroyed as a result of receiving the previous attacks. With Ulquiorra dead, Yammy proceeds to fight Rukia, Chad and Renji. Meanwhile, in the fake Karakura Town, Soi Fon and Ōmaeda confront Barragan who overpowers them in his released form. Hitsugaya is also surpassed by Halibel's released state, and is forced to use the full power from his bankai to counterattack. Tite Kubo - Bleach ​40.
Orihime ​shields Ichigo from one of Ulquiorra's attacks, but Ichigo requests her to let him fight alone. While the battle continues, the arrancar Loly and Menoly try to torture Orihime once again. They are interrupted and killed by the Espada Yammy, who has grown angry with their actions. Before he is about to kill Orihime, Uryū stops Yammy, throwing him out of the tower they were fighting in. With Uryū protecting Orihime, Ichigo uses his hollow powers to confront Ulquiorra. However, Ulquiorra releases his zanpakutō which increases his powers to the point that Ichigo is virtually helpless before him. As Ichigo refuses to give up, Ulquiorra makes a second zanpakutō release and blows a hole in Ichigo's chest. Uryū tries to fight Ulquiorra to give Orihime time to heal Ichigo, but when Orihime notes he is dead, she shouts for help, causing Ichigo's body to undergo a new transformation. Tite Kubo - Bleach ​39.
After ​receiving some unneeded help from Ōmaeda, Soi Fon defeats Barragan's last Fracción and prepares to fight Barragan. Matsumoto continues fighting against Halibel's Fracciones and when she is overpowered, she is aided by Hinamori, who decided she will fight Aizen despite how much she used to admire him. Kyōraku confronts Starrk, leaving the latter's Fracción, Lilinette Gingerback, to face Ukitake, who is unwilling to attack her due to the fact she looks like a kid. Meanwhile, Halibel's Fracciones summon an arrancar "pet" which seriously injures both Matsumoto and Hinamori. Kira, Hisagi, and the 7th company assistant captain Tetsuzaemon Iba fail to stop the arrancar, which is later incinerated by Yamamoto. As Yamamoto easily kills Halibel's Fracciones, Halibel reveals herself to be the 3rd Espada, and Starrk shows he is the 1st, leaving Barragan as the 2nd. Back in Hueco Mundo, Ichigo fights Ulquiorra; although neither of them use all their powers, Ulquiorra continues overpowering Ichigo. 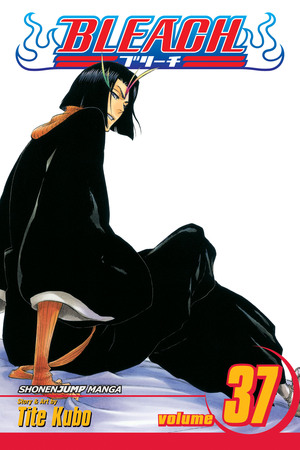 Tite Kubo - Bleach ​37.
Beauty ​Is So Solitary Soul Reaper captain Shinji Hirako has uncovered Aizen's betrayal, but it may be too late. As some of the Soul Society's greatest Soul Reapers transform into Hollows, it will be up to Kisuke Urahara to save them. And back in the present time, the grand battle between the Thirteen Court Guard Companies and the remaining Espada finally begins! Tite Kubo - Bleach ​36.
Turn ​Back the Pendulum Find out what happened in the Soul Society one hundred years ago. Kisuke Urahara is the new captain of twelfth company—now if only he could get along with his assistant captain. And Soul Reaper captain Shinji Hirako suspects something sinister is going on with his second in command, Aizen. Tite Kubo - Bleach ​35.
Higher ​Than the Moon While the Soul Reapers are entrenched in bloody one-on-one battles with the Espadas, their sworn enemy Aizen is preparing to make the next move in his elaborate plan. The battlefields of Hueco Mundo will soon give way to another battlefield where the price of losing will prove to be infinitely higher. Tite Kubo - Bleach ​34.
To ​Ichigo's surprise, his childlike friend Nel Tu reverts to her true form to shield her human protectors. And yet, an unforeseen turn of events leaves Nel and everyone at the mercy of the enemy, who is a heartbeat away from exterminating them. What hope is there for Ichigo and his friends now? Tite Kubo - Bleach ​33.
Ichigo's ​misson to rescue his friend Orihime from the Hollow world has turned into a struggle for survival against a succession of enemies, each one more powerful than the next. Now another vicious challenger has entered the fray, one that happens to know the startling truth about Ichigo's new friend Nel! Tite Kubo - Bleach ​32.
After ​healing Ichigo's terrible wounds so that he can face the diabolic Grimmjow at full strength, Orihime must watch from the sidelines as the two battle. Orihime tries to convince herself that Ichigo will be all right, but she can't help but be worried about him. And when Grimmjow taunts Ichigo into releasing his Hollow self, her confidence in her friend begins to waver. Has their time in the realm of the Hollows changed them both too much? Tite Kubo - Bleach ​30.
Ichigo ​and his friends are moving ever closer to the center of Hueco Mundo and rescuing Orihime. But their battles against the Arrancars are testing them in ways they never thought possible. Can they keep their honor in a world where it doesn't exist, or will Hueco Mundo leave an indelible mark on their souls?! Tite Kubo - Bleach ​29.
Ichigo ​and his friends knew invading Hueco Mundo wouldn't be easy, but even the lesser Arrancars are pushing them to their limits! Can Ichigo, Uryû and Chad find the inner strength to overcome the first line of attack, or will Orihime be stuck in Hueco Mundo forever?! Tite Kubo - Bleach ​26.
Ichigo ​and all his friends are training like mad, spurred on by the looming threat of Aizen's wicked plans. But while Uryû and Chad increase their powers, Orihime finds out that she has to sit out the coming fight, leaving her friends without her protection. And Ichigo, despite his intensive training with the Visards, can't control his Hollowfied self long enough to battle. With the war against the Arrancars ramping up, can the team afford to have two fighters on the sidelines? Tite Kubo - Bleach ​25.
Ichigo's ​recent battles with the Arrancars have proven that if he wants to protect his friends he must get stronger, and the only way to do that is to control his inner Hollow. Ichigo turns to the Visoreds, ex-Soul Reapers who have been Hollowfied, to teach him. But before his training begins, Ichigo must do battle against his Hollow self--winner takes his soul! Tite Kubo - Bleach ​22.
The ​noose is tightening around Ichigo. His inner Hollow can't wait to consume him, the sinister transfer student has him tapped for a mysterious job, and now powerful new enemies have landed in his hometown to destroy him.