The ​second book in the best-selling Legend trilogy comes to life in this vibrant graphic novel adaptation.

After escaping from the Republic’s stronghold, Day and June are on the run in Vegas when the country learns that their Elector Primo has died and his son has stepped in to take his place. They meet up with the rebel stronghold of the Patriots—a large organization straddling the line between the Republic and its warring neighbor, the Colonies—and learn about an assassination plot against the Elector. Using threats and blackmail to get what he wants, the Patriots’ leader, Razor, convinces June to let herself be captured by Republic soldiers so she can win over the Elector and feed him a decoy assassination plan. But when June realizes that the new Elector is nothing like his father, she must work with Day to try to stop the Patriots’ plot before Razor can fulfill his own devastating plans. 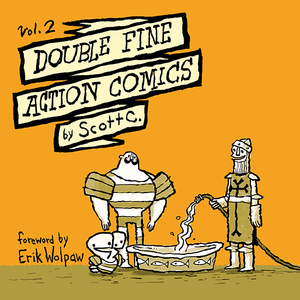 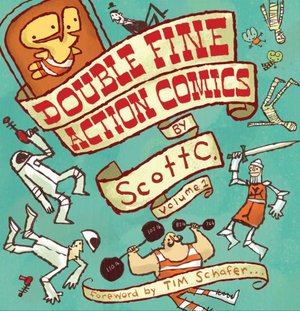 Scott Campbell - Double ​Fine Action Comics 1.
From ​the secret laboratory of renowned videogame developer Double Fine Productions comes this incredible collection of funnies created by the one and only Scott C, art director of Psychonauts and BrÃƒÂ¼tal Legend. Chock full of 300 strips, as well as the coolest behind-the-scenes pages you ll ever find in a book, Double Fine Action Comics by Scott C is an absolute for anyone who enjoys frequent amusement and side effects like laughter. The Really True Myth of Double Fine Action Comics... Once upon a morning, way back in 2002, Scott C stumbled into work at Double Fine Productions. On that particular morning, he decided to get extra inspired and draw a comic to warm up the creative side of his brain. It depicted a two-headed baby (also known as 2HB) and a knight doing not much of anything. Scott quickly got into an amazing groove, drawing a new comic every morning, just to see where the adventure with 2HB and the knight would go. Tim Schafer, founder of Double Fine, suggested to Scott C that he never stop doing comics every morning. In fact, he was so excited about the idea, that he empowered three other Double Fine artists to join him with their own adventures: Nathan Stapley, Razmig Mavlian, and Mark Hamer. Every, single day these dudes would make comics and upload them to doublefine.com. And the world was made amazing. 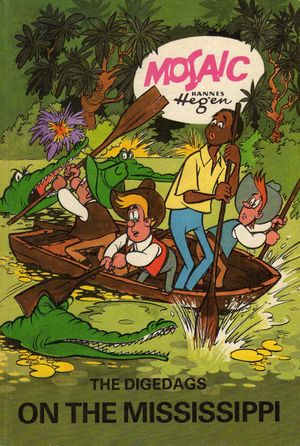 The ​Digedags on the Mississippi Hannes Hegen
2

Hannes Hegen - The ​Digedags on the Mississippi
Hannes ​Hegen was the pen name of Johannes Eduard Hegenbarth (1925-2014), a German cartoonist and comic author, best known as the creator of the Digedags, as popularized in the Mosaik magazine. He was the nephew of illustrator Josef Hegenbarth, as well as a distant cousin of actress Wolke Hegenbarth.

Bryan Konietzko - Michael Dante DiMartino - Avatar ​The Last Airbender - The Lost Adventures
One ​of America's hottest shows returns! For three years, millions of eager fans tuned in each week to watch Nickelodeon's hit animated series, Avatar: The Last Airbender. Ever since, fans have been hungry for more - and now their wait is finally over! This volume collects the long-out-of-print, fan-favorite comics previously published in Nickelodeon Magazine and with the Airbender DVDs, plus over 70 brand-new comics pages. That's over 26 stories set in Airbender continuity, by a host of top-notch talent, many of whom worked on the original animated series itself. 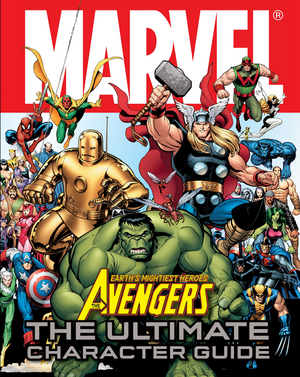 Alan Cowsill - Marvel ​Avengers: The Ultimate Character Guide
Avengers ​Assemble! From Abomination to Wolverine, find out everything about your favorite Marvel Avengers super heroes and villains. This chunky, info-packed guide takes you alphabetically through the Avengers universe, shedding new light on characters like Iron Man, Spider-Man, Wolverine, Thor, and Captain America, giving you more detail about their powers, weaknesses, enemies, and origins than any other book on the market. TM & © 2010 Marvel Entertainment, LLC and its subsidiaries. Licensed by Marvel Characters B.V. All rights reserved. Super Heroes is a co-owned registered trademark 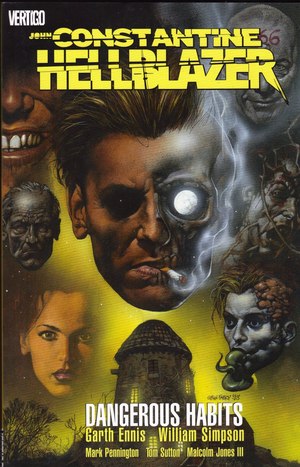 Garth Ennis - Hellblazer ​- Dangerous Habits
John ​Constantine is dying. As a sorcerer literally haunted by the demons of his past, John is no stranger to mystic bedevilment or supernatural horror. But it's his chain smoking that ultimately brings death to Constantine's front door. John Constantine has lung cancer. Though condemned to hell, Constantine continues to laugh in the face of this all-too-serious world. Despite it preternatural overtones, this story is actually a down-to-earth tale about life, death, and the little details in between. 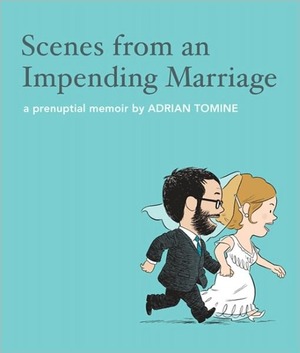 Adrian Tomine - Scenes ​from an Impending Marriage
OU ​ARE CORDIALLY INVITED to witness the hilarious true story of one couple's long march to the altar. Best known for his cover illustrations for The New Yorker and for the critically-acclaimed graphic novel Shortcomings, Adrian Tomine now opens the pages of his private sketchbook to reveal a witty, intimate account of the heady months prior to getting married. Through a series of comic vignettes, Tomine captures the amusing, taxing, and often absurd process of planning a wedding, as well as the peculiar characters and situations that he and his fiancee encounter along the way. Filled with incisive humor, keen observations, and unabashed tenderness, Scenes from an Impending Marriage is a sweet-natured document of the little moments leading up to the big day. 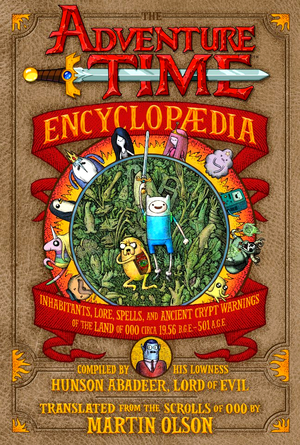 Martin Olson - The ​Adventure Time Encyclopædia
WARNING! Written ​by Lord of Evil Himself to amuse and confound the citizenry of the Nightosphere, Adventure Time Encyclopaedia is perhaps the most dangerous book in history. Although seemingly a guidebook to the Land of Ooo and its post-apocalyptic inhabitants, it is in fact an amusing nightmare of literary pitfalls, bombastic brain-boggles and ancient texts designed to drive the reader mad. Complete with secret lore and wizard spells, fun places you should visit and places where you will probably die, whom to marry and whom not to marry, how to make friends and how to destroy your enemies--this volume includes hand-written marginalia by Finn, Jake, and Marceline. Arguably the greatest encyclopedia ever written since the beginning of the cosmos, it is also an indispensable companion to humans and demons who know what time it is. Adventure Time! 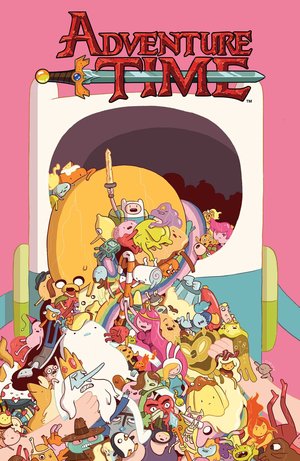 Ryan North - Adventure ​Time 6.
Finn ​is cursed! It looks like Magic Man is at it again and it's up to our heroes to save Ooo before Finn forgets everything... again. This is going to be an adventure you'll want to remember! 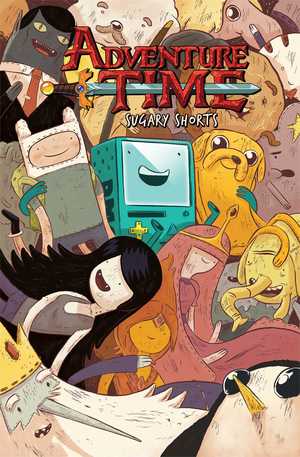 Paul Pope - Aaron Renier - Adventure ​Time - Sugary Shorts 1
Comic ​creators from around the world unite to celebrate all things ADVENTURE TIME in this collection of incredibly original mini-adventures. Starring all of your favorite characters from Finn and Jake to Hot Dog Princess and Peppermint Butler, SUGARY SHORTS Volume One is a syrupy salute to the Land of Ooo that is sure to satisfy your sweet tooth. 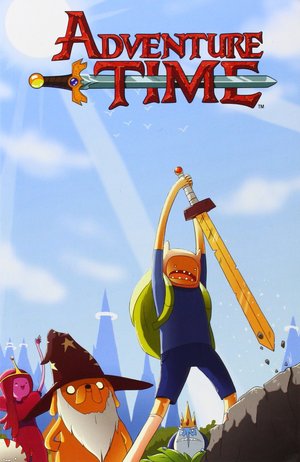 Ryan North - Adventure ​Time 5.
Princess ​Bubblegum is facing a lot of trouble when one of her experiments backfire on her, the land of Ooo is in danger... and so are her friends! Without the help of Finn and Jake, it is up to Princess Bubblegum to clean up her own mess, and hopefully save her kingdom in the process.

The ​Giant Book of Cartoons and Jokes Peter Lawson
0 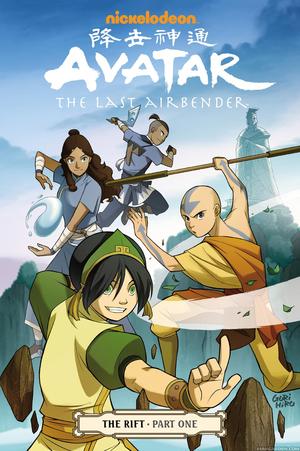 Gene Luen Yang - Bryan Konietzko - Michael Dante DiMartino - Avatar ​- The Last Airbender - The Rift Part 1.
Avatar ​Aang asks his friends to help him honor Yangchen’s Festival – one of the highest Air Nomad holidays, which hasn’t been celebrated in over one hundred years. But cryptic visits from the spirit of Avatar Yangchen herself lead Aang to discover a jointly owned Fire Nation and Earth Kingdom refinery – operating on land sacred to the Airbenders! Is this the cause of the pollution Aang finds there, or is a more mysterious menace afoot? 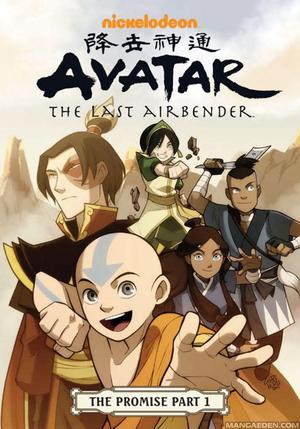 Michael Dante DiMartino - Bryan Konietzko - Gene Luen Yang - Avatar: ​The Last Airbender - The Promise Part 1.
Although ​the Hundred Year War is now over, tensions run high as Aang and Zuko are put on a "collision course" after the Avatar travels to a Fire Nation colony and finds "tension between neighbors" – a threat that may "shatter the world's newfound peace". The unfinished conversation between Zuko and Ozai about the whereabouts of Ursa, Zuko's long lost mother, is completed, but the conversation takes a different path after Zuko asks the question and her fate still remains unknown. Negotiations with Earth King Kuei commence to begin the Harmony Restoration Movement. 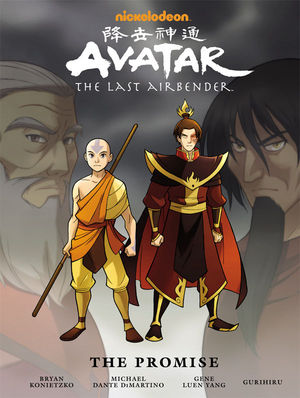 Bryan Konietzko - Michael Dante DiMartino - Gene Luen Yang - Avatar: ​The Last Airbender - The Promise
Aang ​and friends must join together once again as the four nations' tenuous peace is threatened in an impasse between Fire Lord Zuko and Earth King Kuei! As the world heads toward another devastating war, Aang's friendship with Zuko throws him into the middle of the conflict. 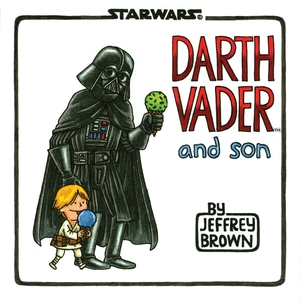 Jeffrey Brown - Darth ​Vader and Son
What ​if Darth Vader took an active role in raising his son? What if "Luke, I am your father" was just a stern admonishment from an annoyed dad? In this hilarious and sweet comic reimagining, Darth Vader is a dad like any other—except with all the baggage of being the Dark Lord of the Sith. Celebrated artist Jeffrey Brown's delightful illustrations give classic Star Wars® moments a fresh twist, presenting the trials and joys of parenting through the lens of a galaxy far, far away. Life lessons include lightsaber batting practice, using the Force to raid the cookie jar, Take Your Child to Work Day on the Death Star ("Er, he looks just like you, Lord Vader!"), and the special bond shared between any father and son. 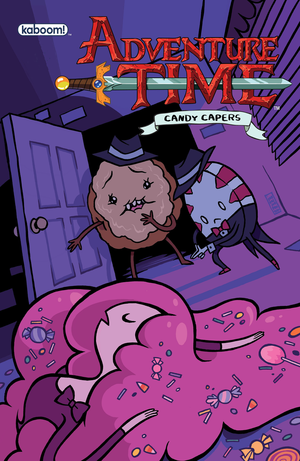 Yuko Ota - Ananth Panagariya - Adventure ​Time - Candy Capers
An ​all-new stand-alone ADVENTURE TIME story featuring Peppermint Butler and Cinnamon Bun! FINN AND JAKE ARE MISSING?! Don’t worry Candy Kingdom, Peppermint Butler and Cinnamon Bun will…protect…you? This is a mini-series you definitely don’t want to miss, with talent of Yuko Ota and Ananth Panagariya of JOHNNY WANDER writing our candied heroes and Ian McGinty of UGLY DOLL on art, there is nothing that can go wrong! 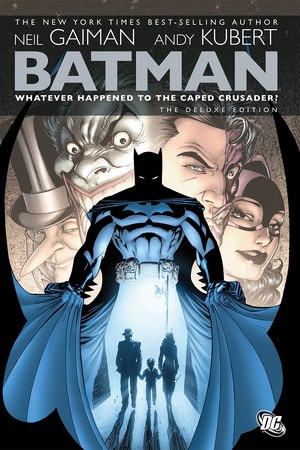 Batman: ​Whatever Happened to the Caped Crusader? Neil Gaiman
3

Neil Gaiman - Batman: ​Whatever Happened to the Caped Crusader?
"New ​York Times" Number 1 best-selling author Neil Gaiman takes on The Dark Knight! Neil Gaiman, co-creator of "The Sandman" and writer of "The Graveyard Book", re-teams with his collaborator on Marvel's 1602, superstar artist Andy Kubert, to tell the story that delves into life, death and the afterlife, leaving no stone unturned and exploring every aspect of The Dark Knight's life and crime-fighting career. This tale parallels the classic "Superman: Whatever Happened to the Man of Tomorrow?" epic, written by Alan Moore. 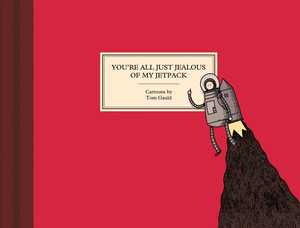 You're ​All Just Jealous of My Jetpack Tom Gauld
0

Tom Gauld - You're ​All Just Jealous of My Jetpack
Cartoonist ​Tom Gauld follows up his widely praised graphic novel Goliath with You're All Just Jealous of My Jetpack, a collection of cartoons made for The Guardian. Over the past eight years, Gauld has produced a weekly cartoon for the Saturday Review section of Britain s most well regarded newspaper. You're All Just Jealous of My Jetpack distills perfectly Gauld's dark humor, impeccable timing, and distinctive style. Arrests by the fiction police and fictional towns designed by Tom Waits intermingle hilariously with piercing observations about human behavior and whimsical imaginings of the future. Again and again, Tom Gauld reaffirms his position as a first rank cartoonist, creating work infused with a deep understanding of both literary and cartoon history. 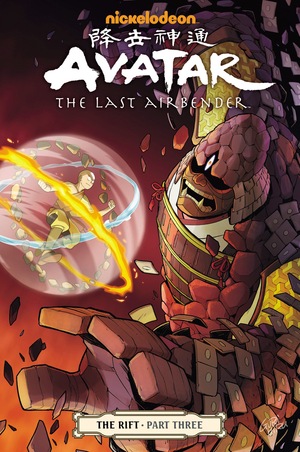 Gene Luen Yang - Bryan Konietzko - Michael Dante DiMartino - Avatar ​- The Last Airbender - The Rift Part 3.
Team ​Avatar is in peril as a dangerously powerful ancient spirit awakens with vengeance and destruction on its mind. Bonds will be tested and new truths revealed as Aang must answer an important question: Can humans and spirits co-exist?!