On ​what at first appears to be an ordinary day, everything changes for private banker Kayla Shaw when she barely escapes a brutal kidnapping attempt and finds herself accused of a shocking crime: the illegal laundering of hundreds of millions of dollars. Damned by lies and false “evidence,” she is trapped with no place to run.

After five agonizing years, landscape painter Rand McCree has finally been offered what he desires most: the name of his twin brother’s murderer. Hungry for vengeance, he accepts a job that will place him in the killer’s orbit . . . and tantalizingly close to Kayla Shaw. The cold-blooded international criminal responsible for Rand’s brother’s death has targeted Kayla as his next victim—and only Rand can stop him from killing again.

Suspicious of each other, needing each other, they are two against the world as the violence of the past erupts in the present. And now innocence alone will not be enough to keep Kayla Shaw alive. . . Elizabeth Lowell - Amber ​Beach
Deadly ​secrets are buried on Amber Beach ... Donovan International is a power to be reckoned with in the dazzling and cutthroat worldwide gem trade -- and is therefore a target for the murderous greed of unscrupulous competitors. Though a shrewd businesswoman, Honor Donovan has been effectively shut out of the dangerous family enterprise by the Donovan males -- until her favorite brother, Kyle, mysteriously vanishes along with a fortune in stolen amber. Now, linking up with "fishing guide" Jake Mallory -- whose previous association with the Donovans has bred mistrust and suspicion -- Honor sets out for the Pacific Northwest in search of answers. But old wars and new politics have lured ruthless, high-stakes players from around the globe into a deadly game. And suddenly, elusive trust can be the only salvation -- and death the penalty for deceit -- if Honor and Jake hope to survive the perilous intrigues surrounding a breathtaking lost Czarist treasure known as the Amber Room ... 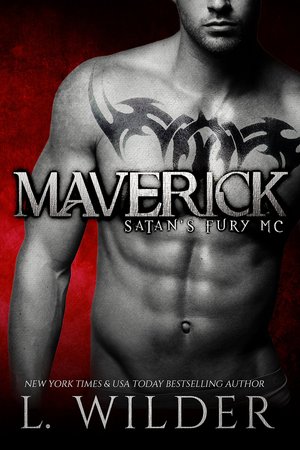 L. Wilder - Maverick
Maverick ​is a man scarred by a past full of deceit. He was forced to make a choice... a choice that now keeps him held in the darkness -- a prisoner of his own doubt and regret. The Satan's Fury MC is the only thing he lives for. Being their new Sergeant of Arms gives him the distraction he desperately needs to endure. He knows that he will never forget, but with the help of his brothers, he'll try to move forward. Henley's life was just as she'd always planned. All of her hard work and studying had finally paid off with a full-ride to college. Everything seemed to be right on track... until the night she witnesses a crime that puts her in danger. She suddenly finds herself needing the protection of Satan's Fury and an enigmatic biker named Maverick. Henley is immediately drawn to Maverick. The pain and anger in his eyes hides something. Despite the walls he keeps throwing up, she knows there is more to him than just the brooding biker who makes her body crave his touch. She will stop at nothing until she makes all of those walls come crashing down. When the lies of Maverick's past unfold, will Henley be the light that pulls him from the darkness? Warning: This book is intended for readers 18 years or older due to bad language, violence, and explicit sex scenes. Maverick is a standalone romance, but you may be interested in reading Summer Storm, the first book in this series. Yellow Tanabe - Kekkaishi ​23.
With ​many questions left unanswered, Yoshimori and Tokine escape Headless Island. All is peaceful back home at the Karasumori Site...until a mysterious fissure cracks open the school grounds. Then Mt. Okubi, the largest of the mystical sites, is attacked, and its enraged guardian deity goes on a rampage! The Shadow Organization sends a powerful, polite young man to help guard Karasumori--but can he be trusted? And who needs help anyway?! Yellow Tanabe - Kekkaishi ​22.
Two ​operatives from the Shadow Organization spirit Tokine away to an isolated island location for questioning. They claim to be merely investigating the slaying of a deity, but their brutal interrogation suggests otherwise! Can Yoshimori and their allies rescue her before it's too late...? 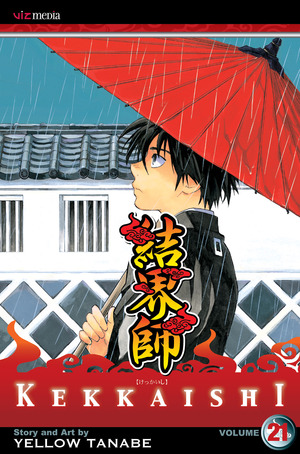 Yellow Tanabe - Kekkaishi ​21.
A ​mysterious guardian deity attacks the Karasumori School! Slaying a deity is a terrible crime, but Yoshimori and Tokine have vowed to protect their mystical site at any cost. The battle rages on, and the kekkaishi are quickly running out of options... 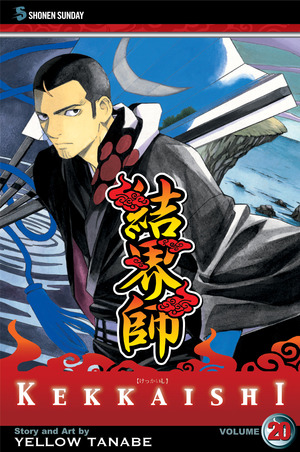 Yellow Tanabe - Kekkaishi ​20.
When ​a number of holy sites are attacked, the shadow organization suspects Yoshimori's mother is responsible, and sends an investigator to visit Yoshimori's family. Yoshimori rushes to defend the other who virtually abandoned him. Meanwhile, Ichiro Ogi, Masamori's archrival, lures Masamori to one of the holy sites… 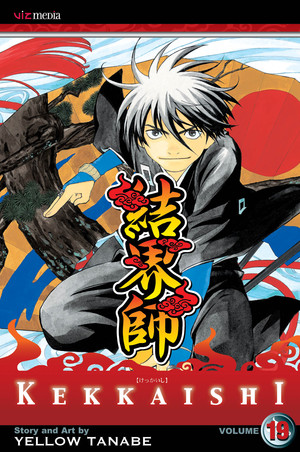 Yellow Tanabe - Kekkaishi ​19.
Yoshimori ​and Tokine have successfully vanquished the thousands of butterflies that swarmed the Karasumori School. But the mystery deepens when the perpetrator of the attack turns out to be a medium who delivers a warning of unspeakable horrors to come! Perhaps some answers lie in Yoshimori's family's past… 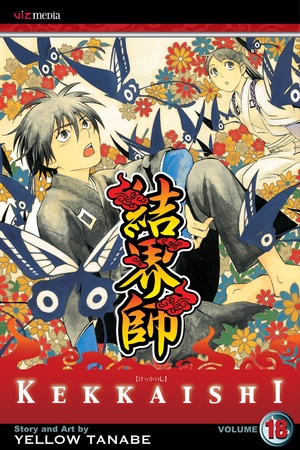 Yellow Tanabe - Kekkaishi ​18.
Brother ​must rely upon brother in a daring escape! So why does Masamori send Yoshimori's friends to spy on him at the Karasumori Site? Then, when a flock of beautiful butterflies descends on Karasumori High School, all the students are in peril... How can Yoshimori single-handedly battle thousands of tiny ayakashi without harming the people in their midst?

Yellow Tanabe - Kekkaishi ​17.
Yoshimori ​and his elder brother Masamori are trapped inside a magical realm... The site's guardian wants to steal Yoshimori's body, and a renegade council member pits brother against brother! Which of the two will escape? And what will become of the other...? Yellow Tanabe - Kekkaishi ​16.
The ​tables finally turn when a classmate falls for Yoshimori. Could it be that Tokine is actually...jealous? Then, family duty calls when Mom sends a dragon-a-gram and big brother Masamori assigns a task that can only lead to temptation: guard the entrance to a mysterious magical site with your life, but whatever you do, don't go inside! Yellow Tanabe - Kekkaishi ​15.
A ​vicious ayakashi is growing inside Yoshimori's school, feeding on the energy of the Karasumori site... If the ayakashi stays, it will grow ever more powerful. But if Yoshimori defies orders and attempts to dislodge it, it could ravage the entire city...! 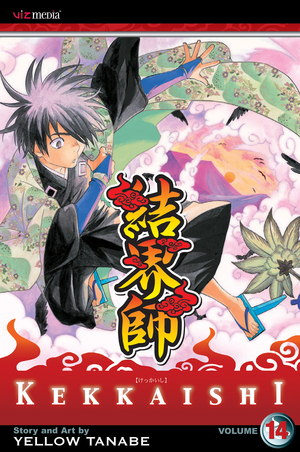 Yellow Tanabe - Kekkaishi ​14.
While ​his big brother Masamori takes heat from the fearsome Council for the calamity at the Karasumori site, Yoshimori attempts to outsmart an ayakashi who saps his opponent's strength with mind games. Then, when Yoshimori decides to play Good Samaritan and help a raven-like ayakashi, will he end up crowing with pride or swearing "nevermore"...? 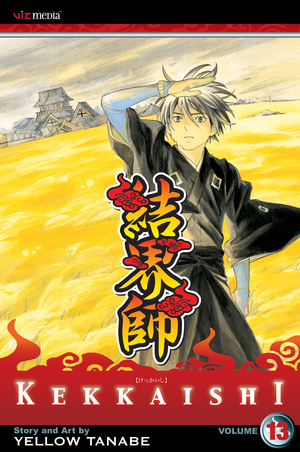 Yellow Tanabe - Kekkaishi ​13.
The ​fate of the dreaded Kokuboro ayakashi lies in Yoshimori's hands as he and his allies fight to get out of Kokuboro Castle alive! By comparison, his formerly hair-raising nightly patrols of the Karasumori Site seem like a walk in the park. But if he survives and returns home as the conquering hero, does an even greater evil lie in wait...? 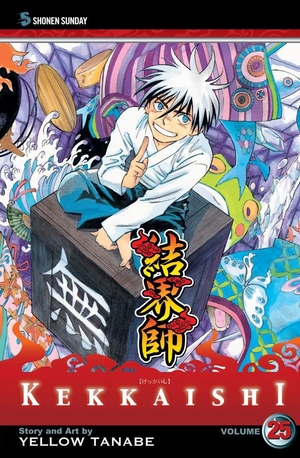 Yellow Tanabe - Kekkaishi ​25.
The ​mysterious Shadow Organization that maintains mystical order in the world is in jeopardy! First, they set out to arrest their prime suspect in the devastating attacks on mystical sites... only to ﬁnd their target permanently out of their reach. Then, their headquarters comes under ﬁre, and one of their Council of Twelve members is slain. Even worse, a member of the Sumimura family is accused of the crime! Meanwhile, Yoshimori trains to control his mind with the help of... a talking cat?! 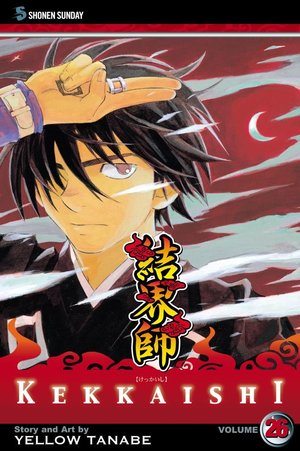 Yellow Tanabe - Kekkaishi ​26.
Yoshimori ​tries to perfect the technique of emptying his mind. Some of his friends might consider this not too much of a challenge... Meanwhile, the leader of the Shadow Organization gives some shocking new orders, leading to horrific consequences for the Karasumori Site - and Yoshimori is implicated! Will Soji help him by spilling some beans... or remain as tight-lipped as ever? Then, things get even scarier with the arrival of - clowns! 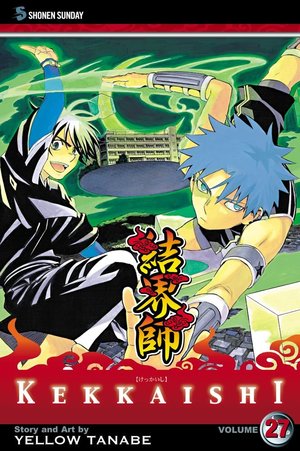 Yellow Tanabe - Kekkaishi ​27.
A ​powerful witch attacks the Karasumori Site and threatens the surrounding town of innocent people. Does the Night Troops' sorcery unit have enough power to counter her magic? Then, Yoshimori's older brother Masamori is invited to revamp the Shadow Organization. Is this one of those offers you can't refuse...? Plus, secrets of the Shadow Organization finally revealed...not to mention the awful truth behind the mysterious attacks on the mystical sites! 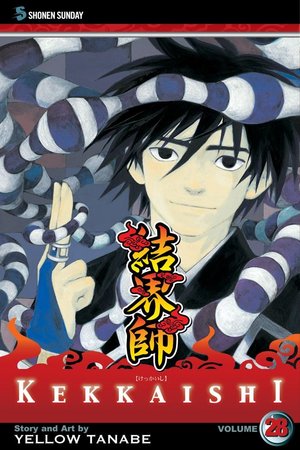 Yellow Tanabe - Kekkaishi ​28.
A ​powerful witch prepares to unleash a final devastating assault on Karasumori! Will Yoshimori be able to master his mind in time to access his full kekkai potential and thwart her? Meanwhile, his brother Masamori learns that a different type of mind control is corrupting the Shadow Organization. How can the Council of Twelve fulfill their mission to protect humanity from dark magical forces when they can't even trust each other...? Yellow Tanabe - Kekkaishi ​29.
When ​Soji is gravely wounded, Yoshimori's desire to protect his loved ones from harm leads to a startling transformation. But Yoshimori isn't the only one with an interest in Soji's survival. What role does the mysterious boy play in the ambitions of a powerful foe...? Then, tragedy strikes Karasumori... In the aftermath, restructuring at the Shadow Organization - the group charged with protecting humanity from dark magic - leads to a promotion for Yoshimori's elder brother. And then the boys' absentee mother turns up with a surprising agenda for both Yoshimori and the guardian of Karasumori! 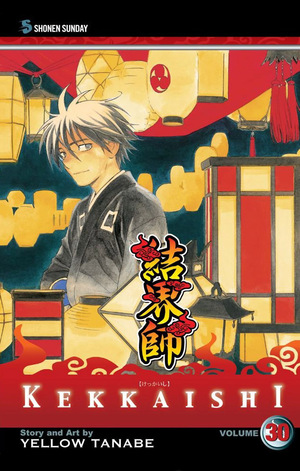 Yellow Tanabe - Kekkaishi ​30.
Yoshimori’s ​absentee mother, Sumiko, makes an unexpected appearance at Karasumori - but not for a tearful family reunion. Sumiko leads Yoshimori and Tokine through a labyrinth to find and remove the mystical site’s mysterious guardian... What does Sumiko know of the circumstances surrounding Tokine’s father’s death? Can she be trusted? Can Karasumori’s guardian be trusted...? And what fate awaits Karasumori if its guardian leaves?! Yellow Tanabe - Kekkaishi ​32.
The ​Ogi Family’s own mystical site is under attack, and even their ruthless heir Shichiro seems powerless to defend it. What are the attackers really after...? Then, having gathered reinforcements, the villains shift their focus to an even more ambitious target! Yoshimori and Tokine have dedicated their young lives to protecting the Karasumori Site. Now its profoundest secrets finally come to light...